Eliminate the federal debt in 8 years

In a March 31, 2016, interview with the Washington Post, Donald Trump promised to eliminate the United States' $19 trillion in debt in eight years.

Trump later softened his promise by pledging to reduce a chunk, rather than the totality of debt, in an April 2016 interview with Fortune. Asked by how much, Trump failed to provide a figure.

Now, almost three years into his first term, Trump has made no progress in reducing the debt. In fact, the gross federal debt has grown by about 16% since he's been in office. (Trump also promised to eliminate budget deficits by balancing the budget fairly quickly, but that hasn't happened either.) 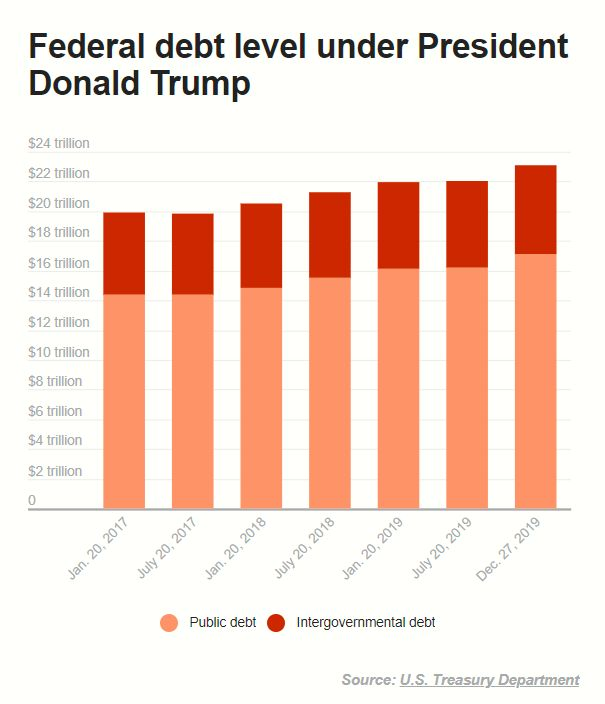 Meanwhile, the publicly held debt isn't just rising — it's outpacing the nation's growth in gross domestic product, which is a measure of the economy at large.

This chart shows the rise on Trump's watch. 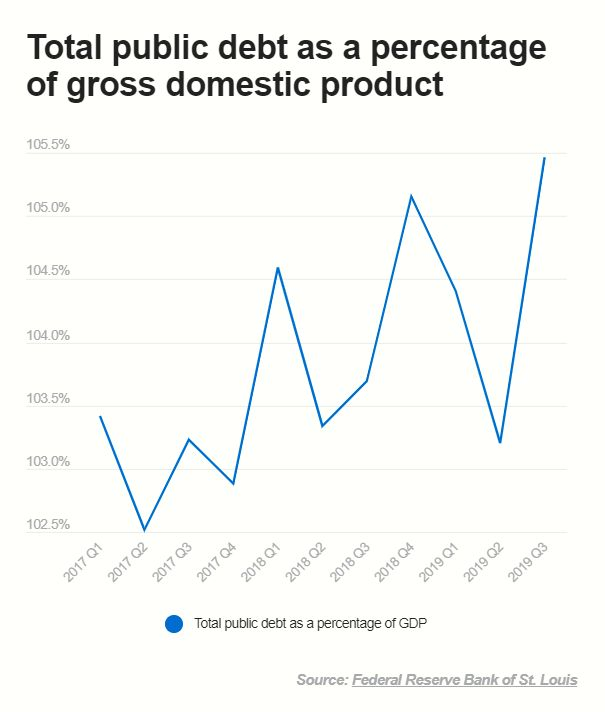 In the statement he released upon signing the most recent major spending bill on Dec. 20, 2019, Trump didn't mention the bill's impact on the debt.

"The government funding bills I just signed into law contain big victories for my Administration and the American people," Trump wrote. "They enable us to continue to advance our pro-growth, pro-worker, pro-family, America First agenda. … Taken together, the government funding bills guarantee that critical priorities — investing in the military, ensuring Americans are more prosperous and healthy, delivering border security, engaging on criminal justice reform, and defending life — will be met in the upcoming year.

The spending bill Trump signed in December 2019 had to be passed by the Democratic-controlled House as well as the Republican-controlled Senate, so congressional Democrats had a hand in crafting the most recent debt increase.

Still, we're rating Trump's promise here, and not only has he not eliminated the debt, he hasn't even shrunk it a little after almost three years in office. We rate this a Promise Broken.

In a March 31, 2016, interview with the Washington Post, Donald Trump promised to eliminate the United States' $19 trillion in debt in eight years.

Trump later softened his promise by pledging to reduce a chunk, rather than the totality of debt, in an April 2016 interview with Fortune. Asked by how much, Trump failed to provide a figure.

But whether he's trying to wholly or partially eliminate the federal debt, the latest Senate-passed budget moves the bill in the opposite direction.

Unlike the House version passed last week, the Senate's fiscal 2018 budget allows up to $1.5 trillion to be added to the deficit over 10 years to offset coming tax cuts.

The budget passed the Senate 51-49, facing opposition by all Democrats and Republican Sen. Rand Paul, R-Ky.

Despite the increase in the deficit, which won't help reduce the debt, the White House commended the budget in a statement.

"President Donald J. Trump applauds the Senate for passing its FY 2018 Budget Resolution today and taking an important step in advancing the Administration's pro-growth and pro-jobs legislative agenda," the press release reads. "This resolution creates a pathway to unleash the potential of the American economy through tax reform and tax cuts, simplifying the overcomplicated tax code, providing financial relief for families across the country, and making American businesses globally competitive."

While the budget unlocks the path to one of Trump's promise to cut taxes, the Senate budget does the opposite of eliminating the federal debt.

We rate this promise Stalled.