Nate Silver at fivethirtyeight.com posted an interesting look Wednesday at how Fox News and MSNBC differ when it comes to discussing the possible impeachment of President Barack Obama.

Using a search of Lexis-Nexis transcripts from each cable network, Silver found that MSNBC has mentioned "impeach" or "impeachment" 448 times in July, compared to just 95 mentions on Fox.

We decided to crunch the numbers ourselves, using a program we have access to called Critical Mention. Whereas Lexis-Nexis searches only a select group of published transcripts, Critical Mention uses closed captioning information, capturing every minute of MSNBC, Fox News and hundreds of other channels.

What did we find?

Silver’s overall analysis holds, though the mentions we found on both MSNBC and Fox News are higher. That’s likely because of programs not included in Lexis-Nexis and programs that re-air throughout the day.

In total, we found that MSNBC has used the word "impeach" or "impeachment" 801 times on air since July 1 (we ran our analysis around noon Thursday) compared to 370 mentions on Fox News. 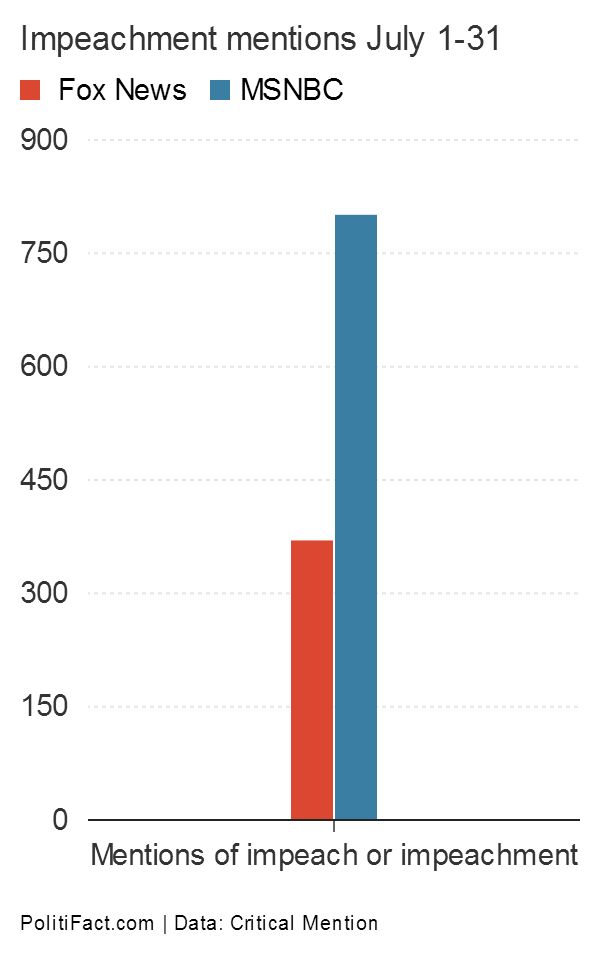 We made a video of just a handful of mentions on MSNBC from July 29-31 and attached it to this story.

Not all the mentions, we should note are created equal. For instance, we caught Lawrence O’Donnell playing clips of Republicans suggesting impeachment. Also on MSNBC, Up host Steve Kornacki rattled off impeach four times in a row for dramatic effect. That counted four times in our analysis (it would have counted four times for Silver as well).

Over on Fox News, we noticed a segment on Hannity focusing not on impeachment per se, but on the disparity of mentions between Fox News and MSNBC.

As Silver suggested, the increase in media mentions may be working toward their intended effect. Politico reported that the Democratic Congressional Campaign Committee, the Democratic Senate Campaign Committee and the House Majority PAC all have been fundraising using the impeachment saga as a foil. Meanwhile, House Speaker John Boehner, R-Ohio, said the impeachment talk is a "scam" by Democrats.

"We have no plans to impeach the president. We have no future plans," Boehner said.

Sources are referenced in the story.