You’re probably seeing this story because you or someone you know shared an image of a post from Serena Williams. The message starts like this:

This image was flagged to fact-checkers like PolitiFact by Facebook as part of its efforts to combat false news and misinformation.

The message of the post is an opinion, and therefore nothing for us to fact-check. But as the message was shared — and shared, and shared — someone made one significant and misleading change to the message.

Someone took a post from a person named Serena Williams and manipulated the image slightly to make it appear as though it came from the tennis superstar of the same name.

Here’s an image of the post being shared with the profile picture altered to look like it came from Williams the tennis pro. 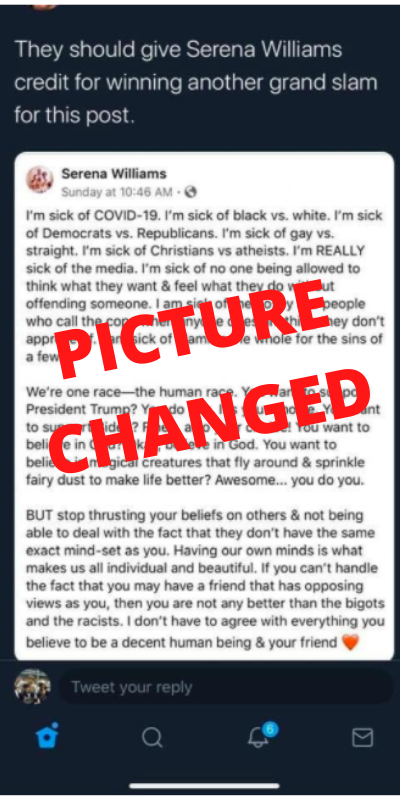 Still, many have gotten tripped up by the wrong post being shared, including NBA player Rudy Gobert.

For what it’s worth, the viral post does not sound like something Williams the tennis star would say. She has supported causes related to the Black Lives Matter movement. She hosted a discussion on her Instagram page, with Bryan Stevenson, the founder and executive director of the Equal Justice Initiative, a human rights organization in Montgomery, Ala. In the video, Williams said she knows she’s been "wronged" because of her race, and "that’s terrible that I have to expect that." She described how her father moved from Mississippi to California because of concerns over his safety.

Williams, the tennis pro, also talked about Confederate statues, saying: "Why would you want to look at a statue of someone who wanted … mass killings of innocent people?"

An image being shared online purports to come from tennis star Serena Williams. It says, in part, that she’s "sick of COVID-19. I’m sick of black vs. white. I’m sick of Democrats vs. Republicans. I’m sick of gay vs. straight. I’m sick of Christians vs atheists. I’m REALLY sick of the media. I’m sick of no one being allowed to think what they want & feel what they do without offending someone."

The words were written by a person named Serena Williams, but someone took that post, and changed it so that it looked like it came from Williams the tennis star.

Professional athlete Serena Williams never wrote that, and based on recent interviews, probably wouldn’t agree with the sentiment.