Memes like this one suggest Obama lowered the American flag to mourn Whitney Houston, but did "nothing" to honor the victims of the Chattanooga, Tenn. shooting on July 16. (Image collected from social media posts)

You’ve probably seen outraged social media posts and headlines about the White House flag lately, most of which go something like this: President Barack Obama ordered the White House flag to fly at half-staff to mourn Whitney Houston’s death, but failed to do so for the five soldiers slain in Chattanooga, Tenn.

After the July 16 shooting, governors such as Rick Scott of Florida and Bill Haslam of Tennessee ordered flags at half-staff, joining local officials who took matters into their own hands absent White House action.

Easton, Pa., Mayor Sal Panto Jr. drove to the city center at a resident’s request on July 18 and lowered the American flag himself. Panto, a Democrat, told local media: "I'm fully aware I don't have the authority to do this, but I feel I just had to remind the president." In Madison, Fla., the county sheriff ordered the station’s flag at half-staff July 20. A Facebook post from the sheriff’s office explained, "The Sheriff advised that our President may not honor the fallen Marines with the Capitol’s flags, but we will."

This perceived breach of flag etiquette sparked a flurry of memes on the Internet and jabs on the campaign trail, particularly among conservatives and GOP presidential hopefuls Sen. Ted Cruz, R-Texas, and Donald Trump. Fox News columnist Todd Starnes suggested the race of the victims was a factor in Obama not lowering the flag.

Even Red Sox legend Curt Schilling tweeted out a curve ball, though he insisted it wasn’t directed at the White House: "Flags at half mast for Whitney Houston? 4 Marines and 1 Navy serviceman assassinated by a terrorist on our soil.....nothing?" 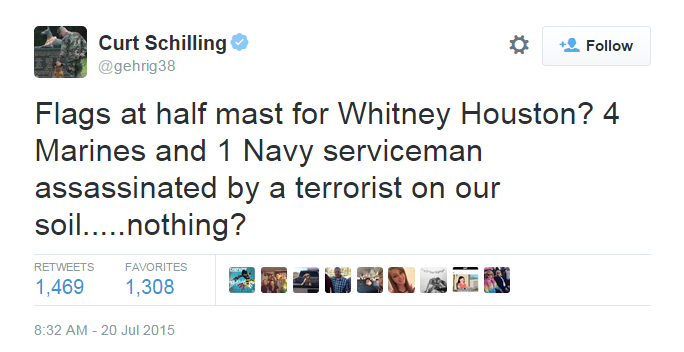 The message eventually reached Washington. Republican leaders of Congress lowered the flag atop the U.S. Capitol on July 21. Obama followed suit hours later, ordering the White House flag to fly at half-staff until sunset on July 25.

Before his announcement, a number of readers asked us to look into various versions of the claim. Did Obama really lower the White House flag for Whitney Houston? And was it unusual for him not to lower to half-staff in honor of the fallen servicemen?

Here’s what we found.

The meme, Schilling and others struck out on the claim about flags lowered in honor of the singer. But the comparison is hardly new.

As early as 2013, various memes have compared Obama’s respect for Houston to his inadequate mourning of Navy SEAL and the inspiration for American Sniper Chris Kyle, child star Shirley Temple Black, and the first general officer killed in Afghanistan, Maj. Gen. Harold Greene. 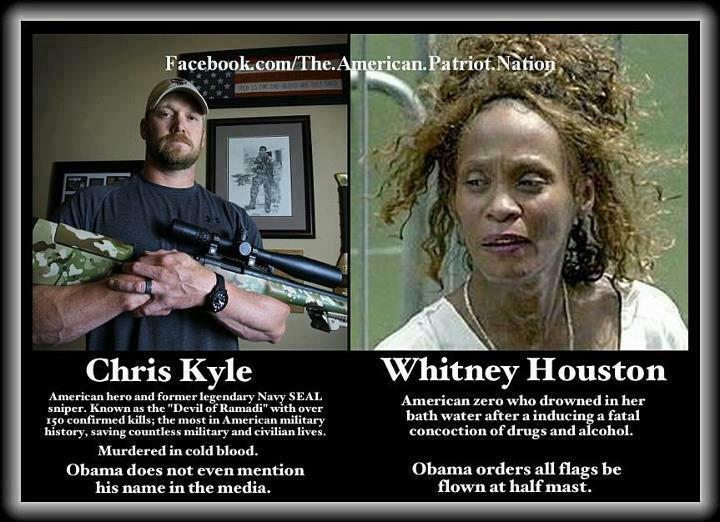 As our friends at Snopes have pointed out, Obama never lowered Old Glory for Houston when she died of an overdose in 2012. It was New Jersey Gov. Chris Christie, a Republican, who ordered flags at half-staff for the musician, who was born in Newark, N.J. Christie initially drew criticism for the decision.

Obama didn’t even issue a direct statement about Whitney Houston’s death, as he famously did for Robin Williams. He did, however, offer his condolences to Houston’s family through his press secretary.

Since 2009, Obama has ordered the flag at half-staff a number of times (there’s no official count, but unofficial compilations do exist). Just as it was under previous presidents, the flag is lowered every year on Memorial Day, the Dec. 7 anniversary of Pearl Harbor, 9/11, and holidays honoring fallen firefighters and police officers.

Obama has also ordered the White House and all other American flags on government property flown at half-staff for some mass murders in the United States.

Here’s a breakdown of proclamations issued by Obama in the wake of other tragedies:

It should be noted that Obama did not order the flag to be lowered for the Charleston shooting in June 2015 or the second Fort Hood shooting of 2014.

Overall, the data shows and experts agreed that it took more time than usual for Obama to issue a proclamation for the Chattanooga shooting.

"This time, it’s been a little slow in happening," said Mike Buss, a flag code expert at the American Legion, adding that the group is glad that the president has issued a proclamation.

Protocol for lowering the flag

Per the U.S. flag code, which dates back to the 1920s, it is up to the president to decide when flags at federal offices should be flown at half-staff, though the rules stipulate 30 days for the deaths of presidents and shorter durations for other government officials. The law also says governors and other heads of government can decide for their own jurisdictions -- typically, if a soldier dies in the line of duty, his or her governor gives the half-staff order.

A president lowering the flag for fallen soldiers is not typical, otherwise it would always be at half staff, experts said.

"Normally, you wouldn't have a presidential proclamation for individual soldiers," said John Hartvigsen, president of the North American Vexillological Association. "They’re really for when whole nation is mourning. But (the Chattanooga shooting) doesn’t really fit into what’s normal."

In addition to Chattanooga, Obama also lowered the flags in response to other mass shootings of servicemen at the Washington Navy Yard in 2013 and Fort Hood, Texas, in 2009.

Experts told us there is no defined guideline for when flags at half-staff is appropriate, though they emphasized that compared to the immediacy of the response, duration often carries more meaning. Even then, the symbolic gesture can only go so far.

Flags are continuously lowered for Pearl Harbor Day, for example, but Hartvigsen argued that the practice meant more Dec. 7, 1945, than it will Dec. 7, 2015. He also pointed out that flags were lowered 30 days to mourn both Kennedy and President Gerald Ford, even though Ford’s death 30 years after his presidency didn’t inspire "the same amount of mourning" as JFK’s assassination.

Still, a half-staff directive can be instinctive and reflective of a nation’s grief. The gesture, which originates from the maritime tradition of lowering a ship’s flags to half-mast as a sign of respect and mourning, became widespread during World War II, according to the vexillological association’s protocol officer, Jim Ferrigan.

"The country just doesn’t wait for the president sometimes," he said. "On Sept. 11, those flags were down that day."

Buss, of the American Legion, said the American flag was lowered every day during World War II and the Vietnam War.

Various claims about Obama lowering the White House flag to mourn Whitney Houston but not for the five soldiers slain in Chattanooga are not entirely accurate.

It is wrong to suggest Obama issued a half-staff proclamation for the late singer. Memes (and Curt Schilling, maybe) confused him with Gov. Chris Christie, who ordered the New Jersey flags to be lowered for Houston, a native of the Garden State.

Ultimately, Obama decided to order flags at half-staff, though he waited five days after the July 16 attack. The flag will remain at half-staff for five days, a day longer than similar shootings at the Washington Navy Yard and Fort Hood.

Experts agreed that while the delay was longer than usual, duration is often a more potent symbolic gesture of mourning.

Speaker of the House, ‘House of Representatives to Honor Five Service Members Killed in Chattanooga, Flags Fly at Half-Staff,’ July 21, 2015