Do up to 80 percent of Texas high school graduates (still) flail afterward?

After we verified a steady uptick in Texas students seemingly prepared for college, a former legislator nudged us to look longer.

It may be that most students fail to thrive after high school.

Willett noted that in 2004, only 29 percent of such students did well enough on the state-required English language arts Texas Assessment of Knowledge & Skills to be deemed ready for college; 43 percent met the mark in math. By 2013, in contrast, 65 percent of students met the TAKS-based readiness standard for English and 66 percent did so in math, according to the state.

Willett’s claim tracing these changes, which we rated True, appeared in the court majority’s May opinion critiquing and upholding the state’s school funding system.

"Those numbers," Bill Hammond, ceo of the Texas Association of Business, told us by email, "are way too high."

Hammond, who as a Texas House member had a hand in the 1984 legislation that launched "no-pass, no-play" and other school reforms, added that he’d heard Mike Morath, the first-year Texas education commissioner appointed by Gov. Greg Abbott, say that about 33 percent of Texas high school students were lately college-ready.

If so, that veers from the figures highlighted by the court.

One third of students college-ready?

We reached out to Morath, who told us by phone it’s reasonable to say that about one third of the state’s high school students are prepared to succeed in college or other training.

You can get to the "one third are ready" conclusion by focusing on students who take the SAT or ACT tests often required of students applying to college.

How we put it in checking Willett:

"In 2014, nearly 34 percent of Texas students who took the SAT (or 32 percent of public school students taking the test) did well enough to demonstrate a readiness for college work without remediation, according to the College Board, which associates an SAT score of 1550 out of 2400 with a 65 percent probability of obtaining a first-year college GPA of B- or higher.

"The same year, among 60 percent of 116,147 Texas high school graduates to take the ACT scored well enough to show a readiness for college English, the Iowa-based group says, with 47 percent doing so in math and 36 percent demonstrating readiness in science--and only 26 percent clearing all the tests’ college-readiness benchmarks. ACT says its readiness benchmarks are ‘scores on the ACT subject-area tests that represent the level of achievement required for students to have a 50% chance of obtaining a B or higher or about a 75% chance of obtaining a C or higher in corresponding credit-bearing first-year college courses.’"

In a similar vein, Raymund Paredes, the Texas commissioner of higher education, recently presented a slide reflecting college readiness in Texas and a few other states based on student ACT scores: 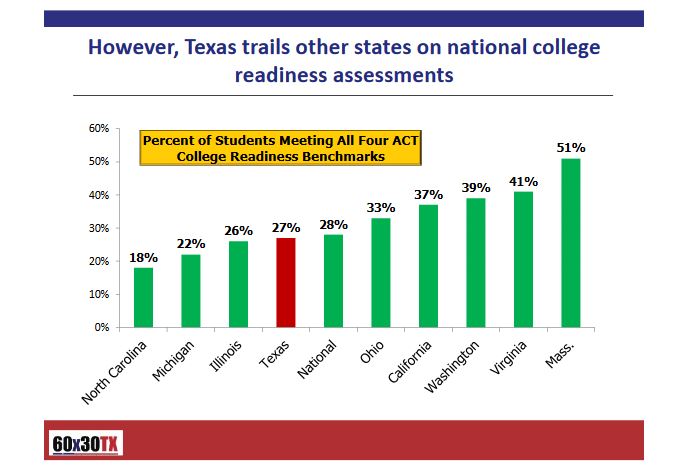 Morath told us about other "readiness" indicators tracked by the Texas Education Agency in its annual Texas Academic Performance Reports:

--Morath said the "most accurate" current indicator of postsecondary readiness might lie in an effort to link scores on the latest state-mandated test, the State of Texas Assessment of Academic Readiness, to a 60 percent chance of a student faring well in college English or math. By this metric, according to TEA, 41 percent of students in 2014-15 were ready to succeed in two or more college subjects. Likely-to-succeed percentages across five subjects gauged by STAAR assessments that year ranged from a low of 34 percent of students in writing to 48 percent of students in math.

--According to another agency metric, nearly 57 percent of students in the Texas high school class of 2013 shortly enrolled in higher education in the state and of those graduates, 71 percent completed a year of additional education without needing remedial work. The state’s 2013 high school graduation rate was 88 percent. Hence, you could say that about 35 percent of students who could have graduated in 2013 ultimately made it through a year of higher education in Texas without needing remedial instruction.

Given that students no longer take the TAKS, the college readiness indicator cited by Willett won’t continue. But another metric, reported by the state since 2005-06, persists. The College Ready Graduates indicator reflects students who score well on the SAT in critical reading and math or on the ACT in reading and math.

Also, readiness can be demonstrated if a student fares well on the state test given to determine if remedial instruction is needed in reading, writing or math before she or he takes regular college courses. In 2014, according to the Texas Higher Education Coordinating Board, 51,517 of 111,276 the state's community college students, 46 percent, cleared the tests in all subjects (reading, writing and math) in 2014, the latest year of available data. Some 71,532 of 80,753 students entering four-year colleges, 89 percent, did the same.

Morath said other ways of assessing the share of students prepared to succeed in college or in training that leads to a professional license include scores on Advanced Placement exams or completion of "dual credit" college courses offered in high school. And looking ahead, he said, the agency is working on a college/postsecondary readiness indicator to be in place by August 2018 when state-bestowed campus grades of A to F debut in keeping with a 2015 law.

At a March hearing of the Texas Senate Education and Higher Education committees, Morath testified that while college readiness rates "as traditionally defined" by TEA "have been on the upswing," that hadn’t translated into surging results in college.

Dramatically, Paredes advised at the hearing that the old readiness threshold tied to TAKS scores--the indicator that Willett and the high court would soon single out as encouraging--had been set too low to align with actual student readiness.

So, there’s room for improvement.

Paredes presented a slide at the hearing suggesting that just 20 percent of Texas 8th graders earn a college degree or other advanced certificate within 11 years (or six years after high school). That conclusion ties to a research approach initially laid out in a February 2012 report commissioned by the Houston Endowment stating that researchers conducted a "cohort analysis of every student who started 8th grade in a Texas public school in 1996, 1997, and 1998," subsequently tracking progress over 11 years.

But the slide Paredes showed senators reflected the postsecondary records of students who were 8th graders in 2004: 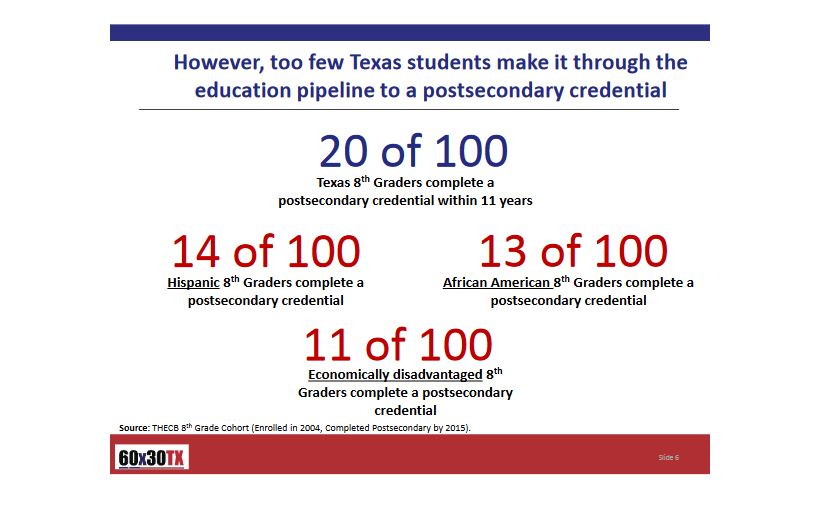 Broadly, Texas has a "60X30" goal, declared by Abbott in 2015, of having 60 percent of Texas' 25- to 34-year-old workforce achieving a postsecondary education credential by 2030. Some 34 percent of such residents lately fulfill the expectations, according to an undated presentation by an advisory committee to the coordinating board.

Morath told us: "We clearly need to continue to improve."

Report, "A New Measure of  Educational Success in Texas, Tracking the Success of 8th Graders into and through College," the National Center for Higher Education Management Systems with the THECB, commissioned by the Houston Endowment, February 2012