Gov. Jerry Brown is no fan of California’s Proposition 53.

The measure would require the state to place a public works project of $2 billion or more up for a statewide vote before using revenue bonds to pay for it. Revenue bonds are repaid by those who use a project, such as drivers who pay tolls on a bridge or highway.

Supporters say Prop 53 will create accountability and efficiency when California seeks to build new dams, bridges and toll roads. It would apply to projects "financed, owned, operated or managed by the state," not to those independently financed and managed by cities and counties.

Opponents such as Brown, however, say the measure would delay critical infrastructure and hike costs -- not reduce them.

Brown argues this point in a new No on 53 campaign TV ad:

"I’m Gov. Jerry Brown, urging you to vote ‘no’ on Proposition 53. It may sound OK, but it’s bad for California. (Prop) 53 takes away local control and increases the cost of roads, bridges and hospitals."

The governor’s claim about increasing costs caught our attention, given that supporters say it will do the opposite.

Two of Brown’s top public works priorities could be complicated by Prop 53: The state’s high-speed rail network and the Delta tunnels plan, which would divert water around the Sacramento-San Joaquin River Delta and deliver it south. 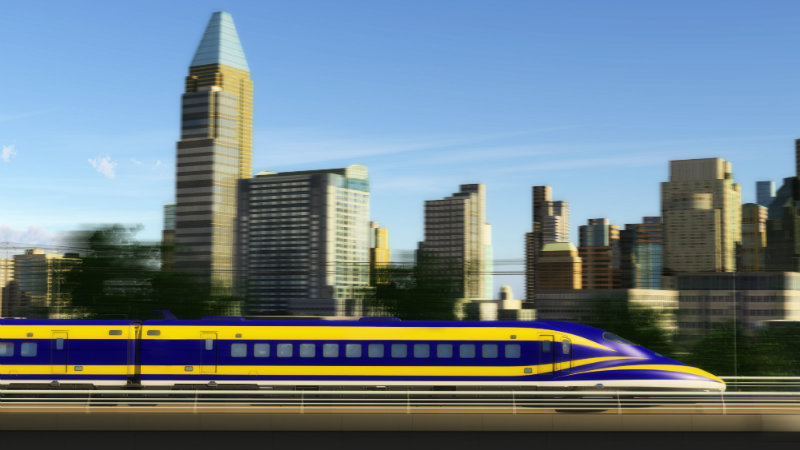 The measure was placed on the ballot by wealthy Stockton farmer Dean Cortopassi, who has been critical of the tunnels project. He’s said Prop 53 ends the state’s "blank check" approach to spending.

We can’t place a Truth-O-Meter rating on Brown’s statement about higher costs because it’s a prediction. PolitiFact doesn’t rate opinions and predictions. There’s no evidence now about how this would play out. And there won’t be any unless the measure passes and projects are subject to the new requirement.

But we can examine what the experts have said about Prop 53 and how it might affect spending on these future massive projects. As it turns out, the experts don’t all share the governor’s certainty.

Supporters say Prop 53 would affect very few transportation projects. And they argue it would not apply to hospitals, in contrast to the governor’s statement.

Opponents of Prop 53 say the measure erodes local control. They say it could allow voters statewide to decide on a project designed to meet a specific region’s needs, such as a new toll road for traffic-jammed Southern California or a new reservoir for water-dependent farmers in the Central Valley.

In its report on Prop 53, the LAO says the measure could hike costs for state and local governments under two scenarios:

The governor also relied on Chiang’s analysis. The treasurer oversees the annual sale of billions of dollars’ worth of general obligation bonds and revenue bonds.

"By requiring a statewide vote on such projects, the initiative might erode local control of projects that have only a regional impact, making it more costly and difficult for projects to be built," Chiang said in an April newsletter. "Even under normal circumstances, let alone emergency situations, such a delay would increase costs and uncertainties."

The governor’s statement, however, ignores two other scenarios presented by the LAO in which costs drop under Prop 53:

The LAO report adds: "The measure’s fiscal effects on state and local governments are unknown. It is unlikely there would be very many projects large enough to be affected by the measure’s requirement for voter approval."

Asked about Brown’s statement, a spokeswoman for the Yes on 53 campaign pointed to the LAO’s lower cost scenarios.

The Yes campaign also said Brown’s mention of hospitals is misleading because the state only builds prison hospitals, not those for general use. It says public hospitals built and run by the University of California would not be affected because the measure doesn’t apply to the UC system.

That seems debatable, as the text of Prop 53 defines "State" as "the State of California, any agency or department thereof, and any joint powers agency or similar body created by the State or in which the State is a member."

The UC system is considered semi-autonomous from the state, though the governor is both part of and appoints a majority of the system’s Board of Regents.

A September memo by the UC Office of the President to a university development committee said "It is unclear whether (Prop 53) would apply to UC."

Either way, the Yes campaign says 53 applies to few projects and makes a simple proposal:

"Clearly, all Proposition 53 does is require a public vote, just like (general obligation) bonds," the campaign said in a statement. "It forces the facts into light and ensures the disclosure of the total cost of a project before the vote.  By requiring voter approval, Prop. 53 spurs public discussion – some of this discussion may include finding cheaper, alternative ways to accomplish the same goal."

In his new TV ad, the governor raises concerns about Prop 53 that have been echoed by local governments, business and public safety groups across the state. They say the measure could put key public improvement projects at risk, dragging out their completion and spiking costs.

An independent look at the measure by the Legislative Analyst’s Office, and an examination by the state’s treasurer, describe some scenarios that agree with Brown’s point.

But the governor ignores the LAO’s argument that there could conceivably be some costs savings, particularly if Prop 53 forces the state to make better use of existing infrastructure rather than spending on a new project or use general obligation bonds that carry lower interest rates.

We can’t give Brown’s statement a rating on the Truth-O-Meter because it’s a prediction, and no one knows how costs will play out if the measure passes.

We can say the governor included half of the independent analysis on the measure. But he left out the other half that doesn't support his argument.

University of California, Office of the President, memo to UC Public Engagement and Development Committee, Sept. 14, 2016