Does California give more than it gets from Washington D.C.?

Does California send more money to Washington D.C. than it gets back in return?

That question has been asked repeatedly as tensions have mounted between California Democrats and President Donald Trump.

Despite their clashes with Trump on immigration, Democrats argue the president and Congress should not withhold federal funds from the state because California is a ‘donor state.’ It pays more in taxes to D.C. than it receives in federal spending, they argue, and thus should see all of that money come back.

"Without a doubt. California is a donor state to the federal Treasury," California’s new Democratic Attorney General Xavier Becerra told NPR in January. "We always, as taxpayers in the state of California, pay more in taxes than we get back to our state. And so we’re going to fight where we need to to make sure that we get the resources that we provided to the federal Treasury."

The donor state question gained greater attention after Trump raised the specter of cutting California’s federal dollars if it passes a sanctuary state bill under consideration in Sacramento.

That bill would generally ban local and state police from working with federal immigration agents, unless they have a warrant. Democratic state lawmakers say it would shield undocumented immigrants who commit minor infractions from punitive federal policies. Republicans contend it would prevent deportation of serious criminals.

"Certainly that would be a weapon"

Asked in an interview on Fox News that aired before the Super Bowl whether he would consider defunding California, Trump responded:

"I don’t want to defund anybody. I want to give them the money they need to properly operate as a city or state. If they’re going to have sanctuary cities, we may have to do that. Certainly that would be a weapon."

Mayors from Los Angeles to San Francisco to Sacramento have vowed to hold firm on policies that they say protect immigrants and are legal.

Trump also recently questioned whether the University of California at Berkeley should lose federal funds after a group of protesters throwing smoke bombs and flares shut down a planned campus speech by a polarizing Breitbart News editor.

Given the growing clash between California and Trump, we wondered whether the state truly does give D.C. more than it collects.

We did not rate any claims on our Truth-O-Meter, but instead laid out the facts as we could find them.

California’s give and take

In January 2017, the California Legislative Analyst’s Office said by several measures California is, indeed, a donor state, but just barely. It receives $0.99 in federal expenditures per dollar of taxes paid, which is below the national average return for states of $1.22 per dollar paid, according to its review of a 2015 New York Comptroller study.

That study ranked California 42nd among the fifty states and the District of Columbia for the amount of federal per capita expenditure ($9,172). 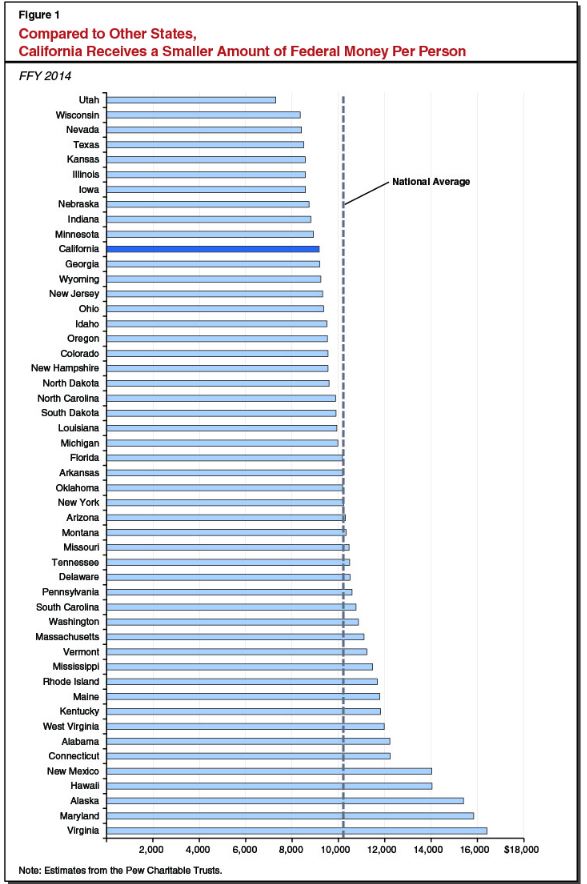 The LAO also cites figures from a March 2016 report by the Pew Charitable Trusts. It found the federal government spent nearly $356 billion in California in fiscal year 2014, for salaries and wages, grants, contracts, retirement benefits and other benefits. That same year, California paid about $369 billion in total federal tax -- or about $13 billion more than it received -- according to the Internal Revenue Service Data Book, 2014.

Another widely-cited study from 2007 says California received only 78 cents for every dollar it paid in federal taxes.

"There’s certainly some truth to that claim" that California is a donor state, said Steve Boilard, executive director of the Center for California Studies at Sacramento State University. He formerly worked at the California Legislative Analyst’s Office.

"You look at other states and they are getting quite a bit more of a return. They are getting $1.10 or $1.20 per dollar," Boilard added. "We really don’t send out that much more than we bring back. But we get back a lot less than most states."

Mississippi had the highest ratio, receiving $2.57 in federal spending per dollar of taxes paid. New Jersey had the lowest, receiving just $0.77 per dollar.

Part of the reason California pays more and receives less than other states is that it has a relatively young and wealthy population.

"Your average Californian makes more money than your average person from Kansas," Boilard added. "So, yeah, inevitably, those people will be paying more money into the system" in income taxes than they draw in federal retirement and health benefits.

Many advocates for California, including former Gov. Arnold Schwarzenegger, have pointed to a study by the Tax Foundation as proof the state receives even less from the federal government.

That report said California received only 78 cents on the dollar from the federal government in 2005. The LAO, however, says that study is flawed because it "inflates the estimated amount Californians pay in taxes."

"I think the LAO report is fairly accurate," Coupal said. "Their ultimate conclusion that it’s about a dollar in for a dollar out, we think is probably accurate within the margins for what we can measure."

While Californians contribute a lot to Washington D.C., Boilard said there’s no easy path for the state to influence federal policy based on being a donor state.

"There are some people who have been suggesting California could withhold some tax payments to the federal government," if Trump cuts the state’s funding, Boilard said. "If people did want to test that, we’d quickly find ourselves in a constitutional crisis, really testing the limits of federalism."

The federal government, Coupal added, is inextricably linked to the state, not just in what it pays to federal employees, but through its management of national parks, military protection and other services the state would struggle to pay for itself.
"It’s really almost an academic debate. I know why people try to use the argument that we’re a donor state to make some sort of point," Coupal said. "It really doesn’t make much difference."

Washington Post, California and President Trump are going to war with each other, Feb. 6, 2017

Los Angeles Times, Donald Trump threatened to 'defund' California. But the state gives at least as much as it gets, Feb. 8, 2016