A week on the ground in Tallahassee with PolitiFact Florida

TALLAHASSEE — PolitiFact Florida reporters attended committee hearings, peered in on floor debates and hoofed it to rallies and news conferences during a week of fact-checking lawmakers and lobbyists at the state Capitol.

What we found: Less controversial issues produced largely accurate claims, but the truth suffered on more divisive topics, such as gun control and the "stand your ground" law.

The second week of the 60-day session started on a largely truthful note. On Tuesday, we heard Rosemary Laird, a geriatrician from Winter Park, testify at the Senate Health Policy Committee in favor of SB 1050, which would establish a memory disorder clinic at Florida Hospital in Orange County.

"Currently, half a million Floridians have Alzheimer’s disease, and in less than 10 years, a 40 percent growth rate means that another 200,000 Floridians will develop this devastating illness," she said.

The numbers were sourced to a credible scientific paper, though the paper deals in estimates and projections rather than hard, verifiable numbers. We rated Laird’s statement Mostly True.

Later that day, we attended a rally by supporters of SB 410 and HB 319, which would enact penalties on employers who pay women less than men, allow victims of discrimination to sue for wages, and would extend protections to transgender workers. Neither bill has been scheduled for a committee hearing in the Republican-led Legislature.

Patricia Farley, a vice president of the Democratic Women's Club of Florida, told the crowd that "a woman working full-time is paid 79 to 80 cents for every dollar a man is paid, and it's even less for women of color, and on average $11,000 per year is lost simply because she isn't a man."

While her figures match the government’s best estimates, a bulletproof number to illustrate the gender gap will always be elusive. The difference in pay can be affected by several murky factors, including the careers women and men choose and time taken off to care for children. In other words, the gap in pay is not solely explained by discrimination. We rated her statement Mostly True.

Also on Tuesday, we took a fresh look at a promise by Gov. Rick Scott to require drug testing for welfare recipients. The promise hit a roadblock when federal courts struck down a 2011 law that Scott signed as "warrantless, suspicionless drug testing." Scott decided not to appeal.

But Rep. Chris Latvala in the House and his father, Senate budget chair Jack Latvala, have proposed rewriting the 2011 state law so it focuses on applicants with a track record of drug use. A House committee approved the bill Monday.

If the bill passes, it would allow for more narrow drug testing than Scott's original promise, which broadly applied to all applicants. Regardless, it has several more hurdles to clear before it can reach Scott's desk, including more hearings and a full vote in the House and Senate. So for now, we decided to keep it as a Promise Broken.

On Wednesday morning, we attended a hearing of a House subcommittee on HB 83, which would heighten the penalties for certain violent offenses if the defendant was in the country illegally. (The bill advanced on a party-line vote, with Democrats voting against it.)

In her testimony against the bill, Ingrid M. Delgado, associate for social concerns for the Florida Conference of Catholic Bishops, said that "unlawful presence" in the United States "is not a crime."

Legal experts said that unlawful presence is a civil violation, which puts the individual at risk for deportation, not for criminal prosecution. However, we also noted that someone who is unlawfully present might still have committed a related crime by entering the United States after having been deported or entering in an illegal manner. This statement earned a Mostly True.

From here the accuracy of statements we checked started to lag.

That’s when the full Senate debated SB 128, which would shift the burden of proof from the defendant to the prosecutor in "stand your ground" cases. One supporter, Sen. Dennis Baxley, R-Ocala, made his argument in part by saying this: "So what has happened since 2005? We’ve seen violent crime continuously go down. Is that not the public policy result that we would want?"

He had a point that crime has gone down significantly since 2005, although "continuously" is overstated since the trend line wobbled upward a few years. The weaker point of his argument is the implication that "stand your ground" played a role in the decline of violent crime. The falling trend in Florida had been happening since the early 1990s and is mirrored at the national level. And at least one peer-reviewed study found that firearm-related homicides in Florida actually increased after the law’s passage. We rated his statement Mostly False.

Our final fact-check of the week came Thursday, the day of a press conference by supporters of SB 1334 and HB 1113, a pair of bills that would tighten background checks for firearms. 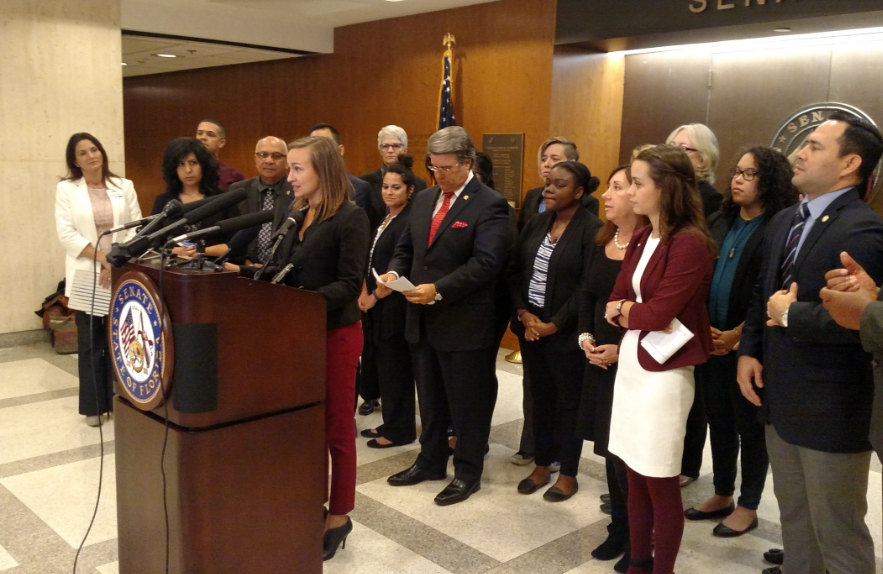 Hannah Willard of Equality Florida speaks at a press conference in the Florida capitol on March 16, 2017. (Louis Jacobson/Tampa Bay Times)

One of the speakers, Hannah Willard of Equality Florida, said that "experts estimate that 40 percent of gun sales occur in no-questions-asked transactions that often take place at gun shows or on the Internet."

This is a longstanding and flawed talking point for those who support tighter laws on guns. Willard told PolitiFact Florida that she had taken it from a briefing paper by the Brady Campaign to Prevent Gun Violence. PolitiFact has been skeptical of this figure because the supporting data was from 1994 and the study in question also included firearms given as gifts or inheritances, not just sold.

When we asked a co-author of the old paper, Philip Cook of Duke University, whether new data had emerged, he said it finally had in January. The more recent paper found that the actual share without checks was 22 percent.

Cook said the new paper, coming after years of problematic data being used in the political sphere, finally offered a definitive answer to the question of how many gun sales went ahead without background checks. And what the new data showed was hardly a trivial difference — the actual figure is roughly half of the longstanding talking point of 40 percent.

Watch out, lawmakers and lobbyists. PolitiFact Florida will be watching.

Hear something from session that needs a fact-check? Email [email protected]