Will a border wall stop drugs from coming into the United States?
By Miriam Valverde October 26, 2017

President Donald Trump claims his promised border wall with Mexico will stop drugs from coming into the United States and help solve the nation’s drug epidemic.

More than 64,000 people died in 2016 from drug overdoses, the majority of which were linked to opioids, according to the Centers for Disease Control and Prevention. Trump declared the opioid epidemic a public health emergency Oct. 26 at the White House.

In light of Trump’s declaration, we wanted to revisit his claims about the impact a southern border wall would have on the U.S. drug problem.

Several experts cast doubt on the wall’s potential effect. They noted that much of the illegal drugs coming into the United States arrive through legal ports of entry and that smugglers also use other tools that a wall wouldn’t stop (even catapults). Illicit drugs also flow from the northern border and through the mail from China.

Trump and the opioid epidemic

About half of opioid overdose deaths involved a prescription opioid, including oxycodone, hydrocodone and methadone.

Other types of opioids include heroin and fentanyl, a synthetic opioid that is 50 to 100 times more potent than morphine. Fentanyl can be prescribed to treat advanced cancer pain, but illegally made fentanyl is sold on the illegal drug market and is often mixed with or sold as heroin.

CDC estimates that at least 91 Americans die daily from opioid overdose. Trump has long held the view that a border wall would reduce deaths.

Before the election, Trump tweeted, "Heroin overdoses are taking over our children and others in the MIDWEST. Coming in from our southern border. We need strong border & WALL!"

He’s made parallel remarks as president via Twitter and in public appearances.

Don't let the fake media tell you that I have changed my position on the WALL. It will get built and help stop drugs, human trafficking etc.

Trump told law enforcement officials on July 28 that a wall would "have a huge impact on the inflow of drugs coming across" and "that could be one of the main reasons you have to have it."

On Oct. 25, Trump said that in order to make a deal that would benefit immigrants in the country illegally who came to the United States as children, "we have to get something very substantial for it, including the wall ... We have to be able to stop drugs from pouring into our nation."

Several drug trade and policy experts told us a border wall likely would not have the impact Trump envisions.

"Traffickers have a variety of mechanisms at their disposal on how to overcome the wall," said Vanda Felbab-Brown, a senior fellow at the Brookings Institution.

Some of those tricks are outlined in a 2016 Drug Enforcement Administration report. Mexican Transnational Criminal Organizations "remain the greatest criminal drug threat to the United States," and their most common method of smuggling drugs remains vehicles legally coming through U.S. ports of entry. Illegal drugs are smuggled in concealed compartments in passenger vehicles or blended with legitimate goods in tractor trailers, the report said.

Smugglers also attempt to get drugs into the United States using catapults, drones, boats and tunnels. At least 225 tunnels were discovered on U.S. borders from 1990 to March 2016, according to the DEA.

"Traffickers have been very innovative in finding strategies to circumvent existing walls and border control thus far, and more of the same strategy (i.e. more of a wall) doesn't offer much promise as a successful strategy," said Rosalie Pacula, co-director of the RAND Drug Policy Research Center.

Illicit fentanyl, one of the main drivers of overdose deaths in the United States, mainly originates in China and comes in through the southwest border, Canada and U.S. postal service, experts said.

A commission established by an executive order from Trump lamented the ability of immigration officials and mail carriers to detect fentanyl, in part due to the small amount needed for psychoactivity.

"Only a presidential directive will give this issue the top level attention it deserves from (the Justice Department, Department of Homeland Security and USPS)," the July report said.

The commission did not list a border wall in its recommendations for fighting the drug epidemic. 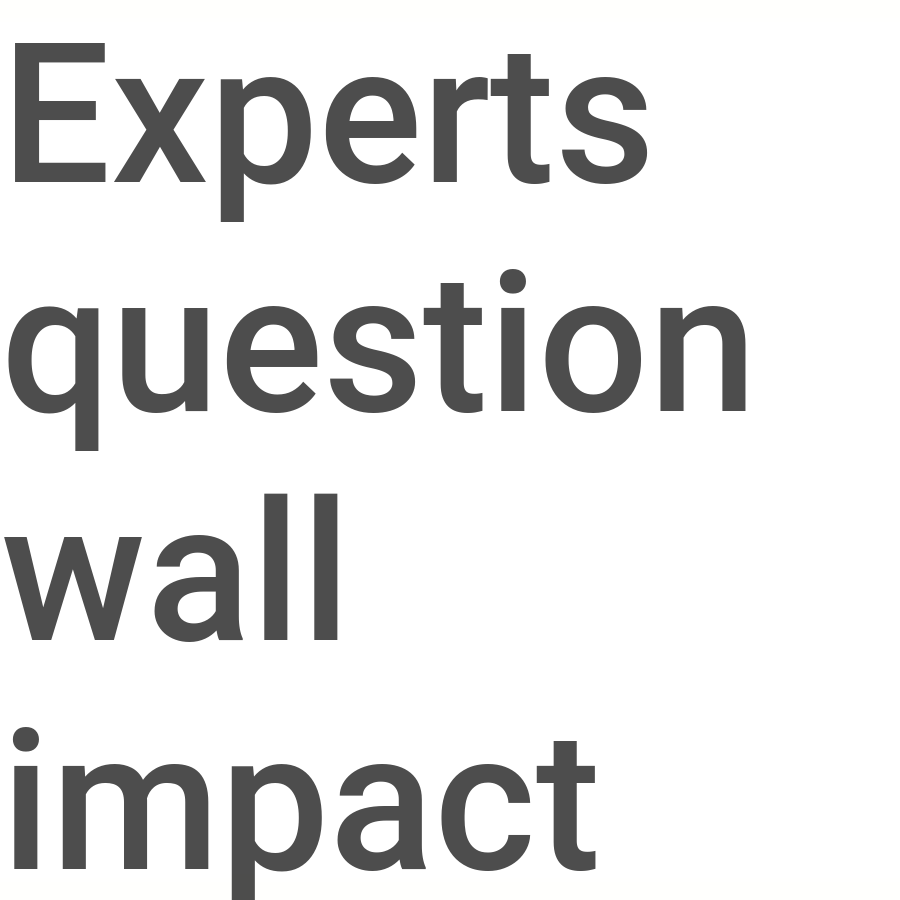 PolitiFact Rating:
Experts question wall impact
"Don't let the fake media tell you that I have changed my position on the WALL. It will get built and help stop drugs, human trafficking etc."
Donald Trump
President of the United States
https://twitter.com/realDonaldTrump/status/856849388026687492

Washington Post, President Trump’s claim that a wall will ‘stop much of the drugs from pouring into this country’, Sept. 11, 2017

Brookings Institution, The Wall, The real costs of a barrier between the United States and Mexico, August 2017

Phone interview, Sanho Tree, Fellow at the Institute for Policy Studies and Director of its Drug Policy Project, Oct. 24, 2017