President Donald Trump likes talking about how great the economy is, a theme he expounded on when he flew to Nashville on Jan. 8 to address the American Farm Bureau Federation. He addressed many topics we have previously fact-checked and others we haven’t, with a mix of accuracy. Here’s an assessment of factual claims from his speech.

"We have created more than 2 million new jobs since the election. Substantially more."

Trump cites an accurate number. The official figures from the Bureau of Labor Statistics show that between December 2016 and December 2017, the number of employed Americans rose by 2,055,000.

That said, no president deserves full credit (or blame) for employment increases on their watch, since broader economic factors beyond their control — including international economic conditions and technological and demographic changes — play significant roles in driving hiring.

That’s especially true given that Trump included two months during which his predecessor, Barack Obama, was in office. If you start counting in February 2017 rather than December 2016, the total doesn’t reach the 2 million threshold Trump cited — it works out to 1,607,000 additional jobs.

"Economic growth has surged past 3 percent, something that wasn’t supposed to happen for a long time. We’re way ahead of schedule."

While economic growth has been robust, Trump is exaggerating here.

In the second and third quarter of 2017, annualized GDP growth did reach 3.1 percent and 3.2 percent. But the first quarter of 2017 had growth of only 1.2 percent, meaning that the first three quarters collectively saw less than 3 percent growth. (The final 2017 growth figures will only be determined once the fourth-quarter growth rate is finalized.)

More to the point, it was hardly unprecedented to get 3 percent growth under Obama. In fact, it happened eight times during Obama’s 32 quarters in office, or about one-fourth of the time. Growth under Obama reached or exceeded 4 percent four times on a quarterly basis and peaked at 5.2 percent.

Trump has a long way to go before he can crow about consistent 3 percent growth, and experts are skeptical that he or any president these days can accomplish it, given economic and demographic trends. 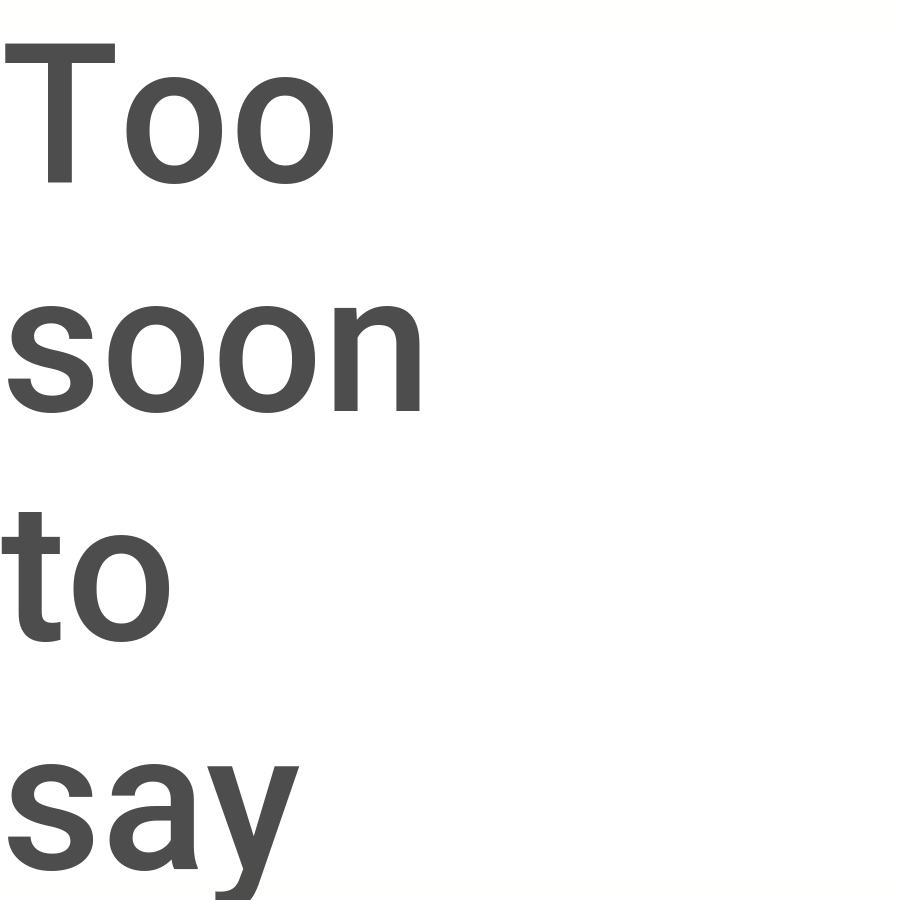 PolitiFact Rating:
Too soon to say
"Economic growth has surged past 3 percent, something that wasn’t supposed to happen for a long time. We’re way ahead of schedule."
Donald Trump
President
https://www.whitehouse.gov/briefings-statements/remarks-president-trump-american-farm-bureau-annual-convention-nashville-tn/

Trump is correct. The unemployment rate for December 2017 was 4.1 percent, unchanged from the previous two months. The last time it was lower than that was between September 2000 and December 2000, when it was 3.9 percent. That’s 17 years ago.

"African-American unemployment is the lowest it’s ever been in the history of our records."

As we’ve noted, in December 2017, African-American unemployment fell to 6.8 percent. That’s a record low since the statistic was first calculated in 1972. The previous record low was 7 percent in April 2000 and September 2017.

"The stock market is hitting one all-time record after another, boosting your 401(k)s and retirement accounts for everyday Americans."

That’s a significant rise, though as we have noted, other presidents, notably Obama, have also presided over large rises in the Dow.

As for how many "everyday Americans" have 401(k) retirement-savings accounts, they are perhaps more limited than Trump suggests. According to Census Bureau data cited by the Motley Fool, a financial website, only 32 percent of Americans are using a 401(k), a percentage that is relatively low because many companies don’t offer one, especially smaller employers. So many Americans aren’t directly sharing in the stock market’s rise.

"Based on the (rise in) stocks, 39 (percent returns) is not that good. You’re not really doing that well" if you’re only getting 39 percent.

Trump offered this observation as part of an anecdote about a New York police officer who told him, "My 401(k) is up 39 percent."

In reality, a 39 percent annual return would be remarkably good. 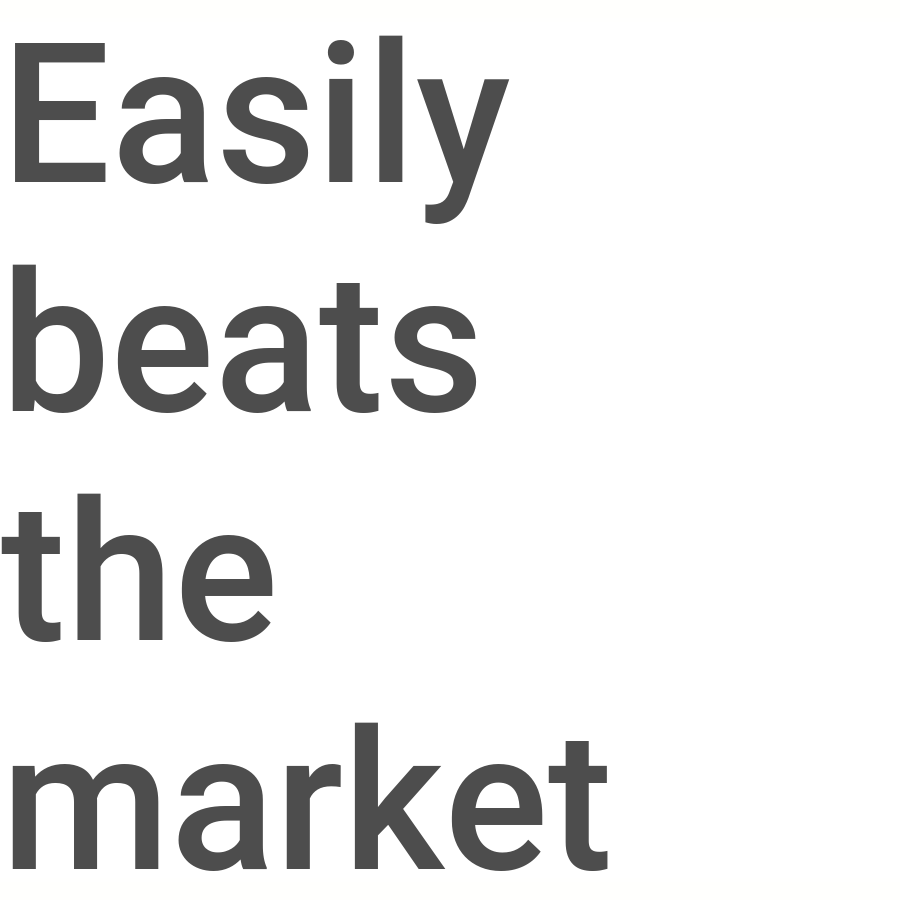 PolitiFact Rating:
Easily beats the market
"Based on the (rise in) stocks, 39 (percent returns) is not that good. You’re not really doing that well" if you’re only getting 39 percent.
Donald Trump
President
https://www.whitehouse.gov/briefings-statements/remarks-president-trump-american-farm-bureau-annual-convention-nashville-tn/

"And we have just signed into law the most significant tax cuts and reforms in American history."

We won’t judge whether the tax bill Trump just signed is "the most significant" in history, but it’s not the biggest. As we’ve noted, even the most expansive estimate of the recent tax bill tax cut is exceeded by President Ronald Reagan’s 1981 tax cut in inflation-adjusted dollars, and as a percentage of GDP, a half-dozen or more previous tax cuts were larger.

We’ve rated a nearly identical claim Mostly False. The law does cut taxes by roughly that much, but citing only the tax cuts ignores that the bill also includes $4 trillion in tax increases, for a net of $1.5 trillion in tax cuts. Trump is misleadingly suggesting that the cuts are greater than they are on balance, once all provisions are counted. 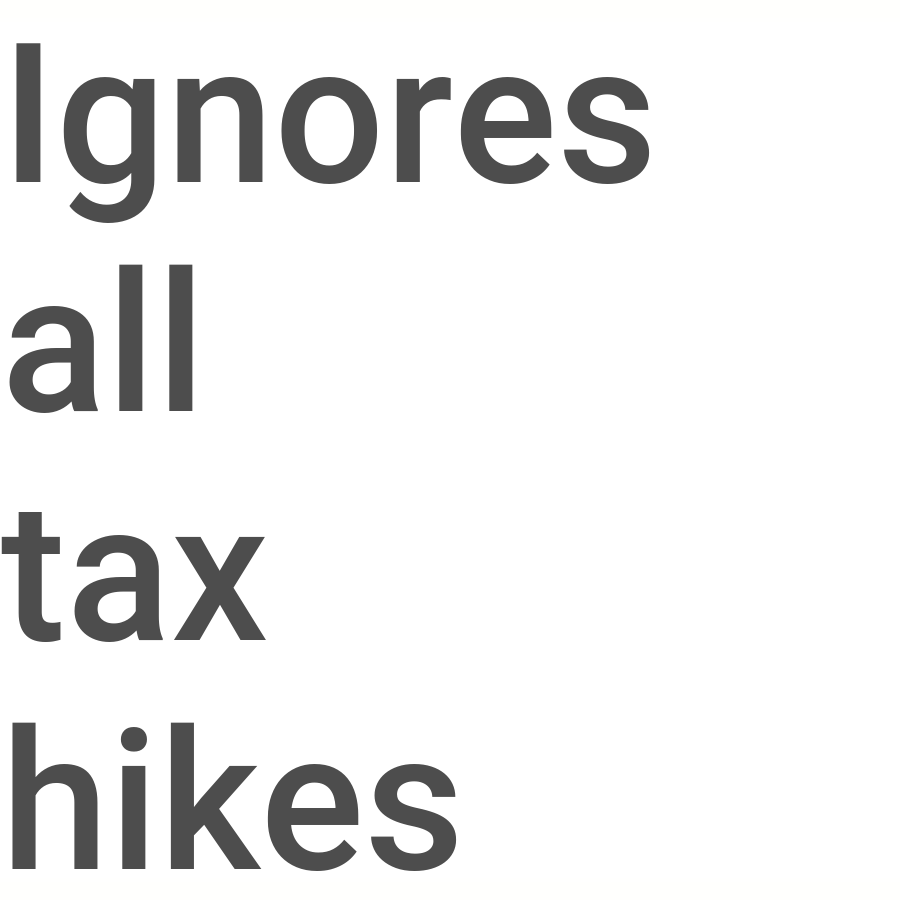 "Most of those benefits (from the tax bill are) going to working families, small businesses, and who? The family farmer."

Many, though not all, Americans will see a tax cut, at least in the early years. But the benefits mostly go to the wealthiest Americans. As this chart shows, the biggest gains accrue to the relatively small number of households earning more than $100,000, and the gains to those earning over $1 million a year receive a gain that’s massively disproportionate compared to their share of the population. 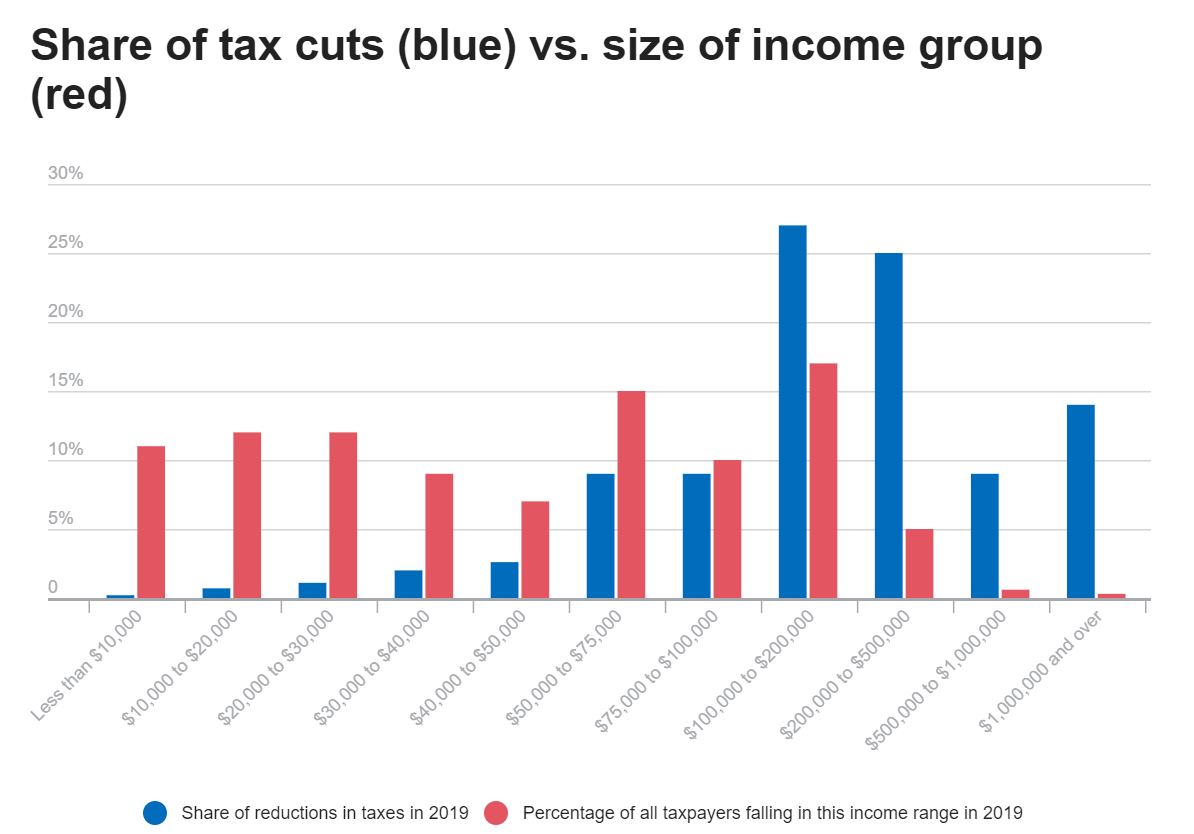 Meanwhile, the tax gains shrink or disappear for most Americans by 2027, as this chart shows. 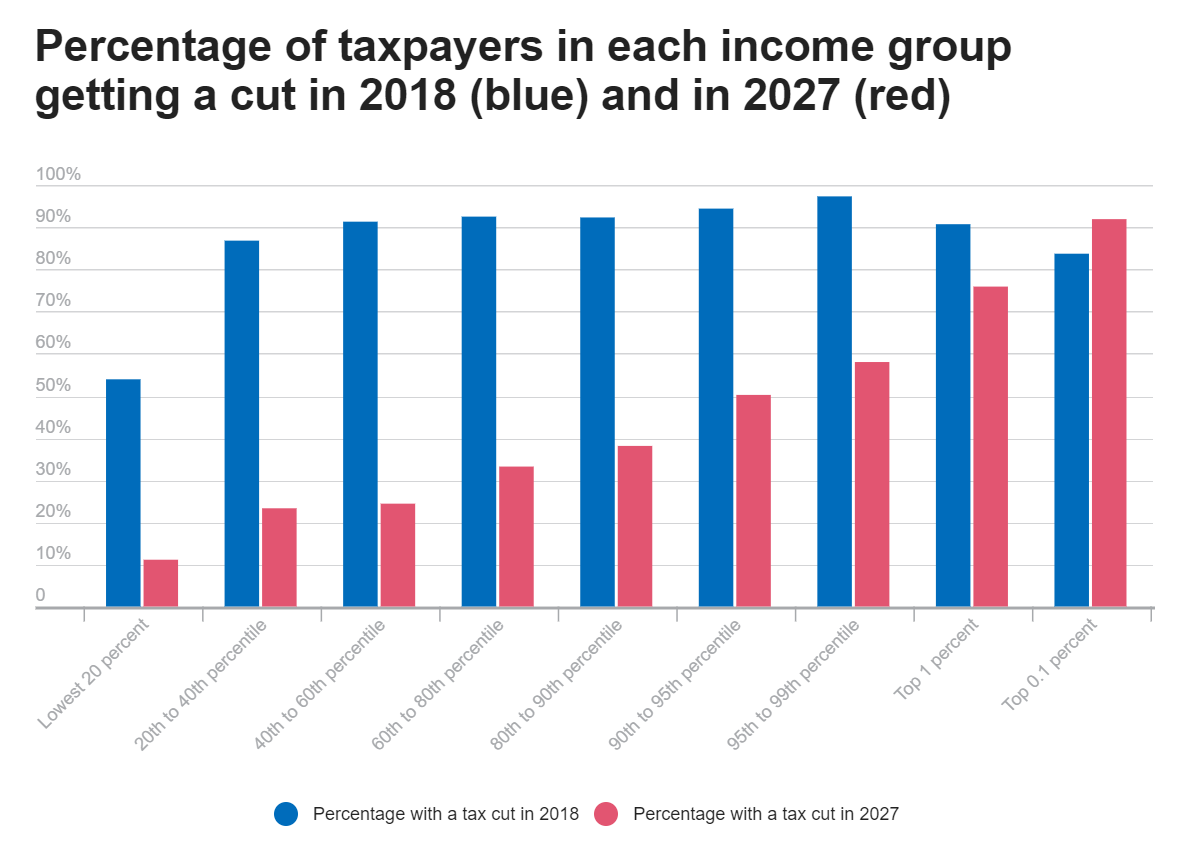 Trump is correct that no Democrat in either chamber voted for the tax bill.

"If the Democrats ever had the chance, the first thing they would do is get rid of it and raise up your taxes, sometimes by 40, 50, 60 percent higher than you’re paying right now."

It’s hard to predict what Democrats would do to change tax policy if they managed to regain control of Congress -- for starters, they would need to overcome a Trump veto to enact anything before 2020, making any potential changes a tough climb -- but Trump exaggerates the scale by which Democrats would have raised taxes had Hillary Clinton been elected president in 2016.

The Urban Institute-Brookings Institution Tax Policy Center’s analysis of Clinton’s tax plan concluded that "nearly all of the tax increases would fall on the highest-income 1 percent; on average, low- and middle-income households would see small increases in after-tax income." Like Trump, Clinton would have increased the child tax credit and modified taxation of multinational corporations, among other things. 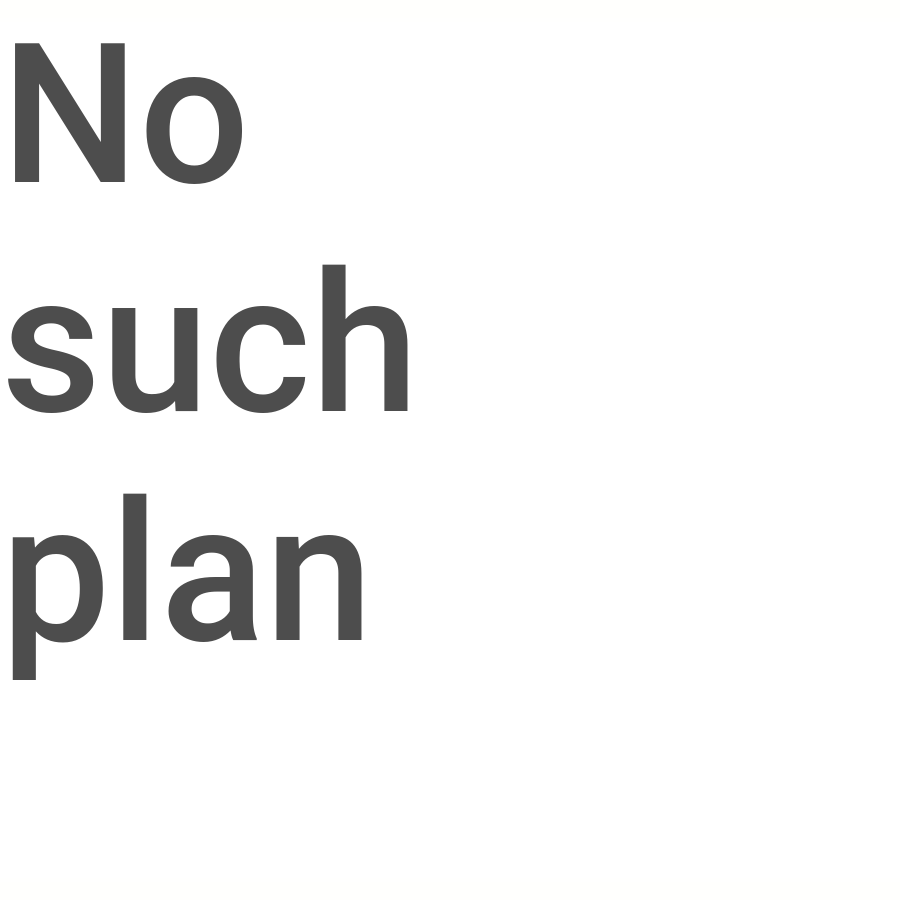 PolitiFact Rating:
No such plan
"If the Democrats ever had the chance, the first thing they would do is get rid of it and raise up your taxes, sometimes by 40, 50, 60 percent higher than you’re paying right now."
Donald Trump
President
https://www.whitehouse.gov/briefings-statements/remarks-president-trump-american-farm-bureau-annual-convention-nashville-tn/

We rated a similar claim Half True. We noted that the tax impact on families would vary significantly given their specific financial circumstances. Also, the gains start to shrink and eventually turns into a tax hike as time goes on, due to expiring tax breaks and slower inflation adjustment calculations.

Trump has often said that the United States is the most highly taxed nation in the world, an assertion we’ve rated False. But tweaking the claim slightly to specify that the United States has the highest corporate tax rate in the developed world makes it accurate. In his Nashville speech, Trump correctly described the comparison.

"From now on, most family farms and small-business owners will be spared — and you’re going to be spared, and it really is the word punishment of the deeply unfair estate tax, known as the death tax — so you can keep your farms in the family."

Because the tax only kicked in for estates bigger than about $5.5 million in 2017, only 5,460 estates paid the tax annually, according to credible estimates. Of those estates, about 80 represented small businesses or farms.

The new law keeps the estate tax in place but increases the amount that can be shielded from taxation. Under the new provision, the tax will affect estates of at least $11.2 million, or $22.4 million for couples. That means that even fewer small businesses and farms will have to worry about the tax.

Finally, it is only known as the "death tax" by critics of the levy. It doesn’t tax death -- it only taxes estates larger than the vast majority of Americans will ever stand to inherit.

PolitiFact, "White House is misleading by citing only cuts, not hikes, in tax bill," Jan. 3, 2018