Mailbag: ‘I am now starting to question your perspective’

Lots of readers have written us to sound off recently. Here's a sampling. (Marcin Wichary, via Flickr Creative Commons)

It’s spring. The flowers are blooming, and so is the PolitiFact email inbox. Here’s a rundown of recent comments, complaints and compliments from readers.

One reader took issue with a portion of our fact check of Democratic presidential candidate Kamala Harris. We looked at her statement that "in 30 states, average teacher pay is less than the living wage for a family of four." We rated that Mostly True. One of the factors that led us to downgrade it slightly was that teachers are typically paid by their school system for nine or 10 months out of the year, while the living wage is calculated based on a 12-month year.

The reader wrote, "I have not taught at the high school level, but I have taught at the college level, and I deeply disagree and resent the idea that teachers only work a nine-month year. A lot of work occurs at home in lesson preparation, creating and grading tests -- multiple choice tests can take hours to create, but are quick to grade, while essay tests can be created in 10 or 15 minutes but are a royal pain to grade with constructive comments. The time off in the summer, as far as I am concerned, is comp time for all of the overtime the teachers are not paid in the school year."

E. Everett Bartlett, president of the group SAVE (Stop Abusive and Violent Environments) said he appreciated our analysis of a comment by another expected Democratic presidential candidate, Joe Biden. Biden said, "Since the passage of (the Violence Against Women Act), annual rates of domestic violence have dropped by 63 percent." We rated that Half True, because the data he was using was old, and the cause-and-effect was uncertain.

"The data that he, and you, cite comes from the National Crime Victimization Survey. But most persons don’t regard a shove or slap on the face as a ‘crime.’ So this survey is a poor indicator of partner aggression. A better source is a different survey by the Centers for Disease Control and Prevention."

One reader took issue with our fact-check of an old allegation that has recently become timely again -- that Democratic presidential candidate Beto O’Rourke "has a criminal record that includes DWI and burglary arrests." We rated that True.

"While I do not disagree that, technically speaking, there is a criminal ‘record’ that reveals that Beto was twice arrested on criminal charges, I disagree with the spirit of that finding. As an attorney with more than 20 years of experience handling criminal matters, I feel that the word ‘record’ implies that there were convictions -- that is, that a jury of his peers found him guilty of these charges, or that he pled guilty to them. In both cases, however, the charges were dismissed, meaning no such conviction ever took place."

A reader suggested that we should have been more specific with our wording in our fact-check of a statement by conservative radio host Rush Limbaugh, who said, "Climate change is nothing but a bunch of computer models that attempt to tell us what's going to happen in 50 years or 30. Notice the predictions are never for next year or the next 10 years. They're always for way, way, way, way out there, when none of us are going to be around or alive to know whether or not they were true." We rated that False.

"In the article, Kevin Trenberth, a senior scientist at the National Center for Atmospheric Research, is quoted as saying, ‘The Earth is now hotter than it has ever been.’ The statement is essentially repeated in the closing paragraphs of the piece. But these statements are patently false. The Earth is approximately 4.5 billion years old. At best, we have climate data for 0.00001% of this time. In its early days, the Earth was very hot -- much hotter than it is now."

One reader who said they are a longtime fan has become disenchanted by our increased output of fact-checks about memes and other claims on Facebook:

"I am now starting to question your perspective. Recently, Rep. Alexandria Ocasio-Cortez responded to criticism regarding the fallout from Amazon pulling out from a proposed New York City second headquarters. I eagerly anticipated your fact checking of her comments because there was a stark difference in opinion between her and New York City Mayor Bill de Blasio regarding the proposed tax incentives. Instead, not only did you ignore the issue, you chose to release a story debunking ‘viral images’ that purported to show her with her legs open. The fact that someone would photoshop any woman in a compromising manner is despicable and reprehensible. It is a personal attack on their dignity and completely contemptible. But your responding to it is lowering the bar. Rep. Ocasio-Cortez is a remarkable success story and a highly influential member of Congress and the Democratic Party. She does not need you to defend her honor against the lowest trolls of the Internet. What she does need -- and more importantly, what constituents who are interested in her policies deserve -- is a honest assessment of her statements of fact."

Two readers offered some additional information to accompany our fact-check of the statement that novelist Sinclair Lewis said, "When fascism comes to America, it will be wrapped in the flag and carrying a cross." We rated that False.

The readers pointed to a separate 1935 statement made by journalist Upton Sinclair. It's not the same quote (or the same speaker) but it's similar: "A demagog will arise—he'll be intensely patriotic, wrapped in flags; an ardent Christian, and all the rest..." 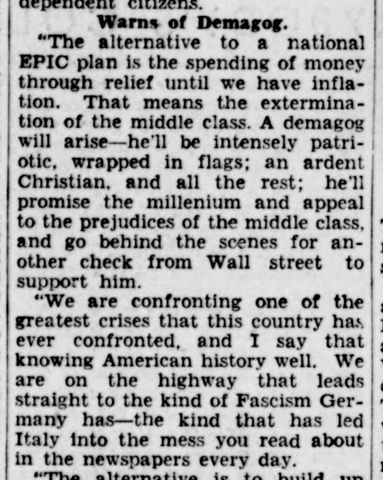 We also got a few words of support from readers who appreciated our work.

"Thanks for your invaluable service in this time of ‘alternate’ political facts. It is reassuring to know that there is such a large group of organizations trying to address this problem worldwide."

"Your organization does incredible things. A+ in my book!"