• On the verge of the Christmas and New Year’s holidays, the nation’s coronavirus caseload continues to rise. So do deaths from the virus. The number of new daily cases is vastly higher than the initial peak in April, and the number of daily deaths is also setting records.

• The emergence of two FDA-approved vaccines could be a turning point in the pandemic, but experts say cases, deaths, and other key metrics will continue to rise for several more months until the community-wide protective effect kicks in.

Like much of the year before it, the 2020 holiday season will be like none other in living memory, thanks to the coronavirus pandemic.

"We saw a pretty sharp increase in cases nationally after Thanksgiving, and I have no reason to suspect that we will avoid that through Christmas and New Year’s," said Brooke Nichols, an assistant professor in the department of global health at the Boston University School of Public Health. "The trends, honestly, are worrying all around."

The start of distribution for two vaccines is a watershed moment in the course of the pandemic. Still, experts caution that people need to keep their expectations in line with reality.

Nichols said she worries that the existence of a vaccine could lead Americans to slack off on social distancing and mask-wearing, especially during holiday events.

The impact of vaccines will not likely be felt until late spring, when more Americans are covered, experts say.

"Full protection won't come until the second vaccine dose, and that's a month after the first," said Tara Smith, a Kent State University epidemiologist. "Even with the first 1 million-plus people vaccinated, it will take time to start to make a dent in case counts due to the vaccine."

The number of confirmed cases detected each day has been on a steep and almost uninterrupted rise since mid-September. The brief downward spike in the chart below represents  the Thanksgiving holiday, when fewer tests were completed due to holiday closures.

The number of cases being detected every day this winter has left the previous spring and summer peaks in the dust. For most of December, the increase in cases has settled in above 200,000 per day.

The trend line for coronavirus deaths is even more worrisome.

During September and October, the number of coronavirus deaths was generally around 700 a day, well below the initial peak of about 2,000 a day in April. Experts attributed this improvement partly to doctors getting better at treating the disease, resulting in improving survival rates.

Now, however, the number of deaths has shot up to around 2,500 a day, with no sign of slowing.

Hospitalizations have also risen since late September, although the number of new daily hospitalizations has leveled off during December. Experts hope it isn’t because hospitals are becoming full, leaving patients who need hospital treatment to go without.

The positivity rate, which measures what percentage of tests come up positive for the virus, started going up between late September and early December, rising from 4% positive to 11% positive. Higher positivity rates are a concern because they indicate the extent of community spread.

The Centers for Disease Control and Prevention continues to find "excess deaths" beyond historical norms that are believed to stem either from the coronavirus itself or from the societal impacts of the virus, such as people being too concerned about the virus to see a doctor, or from bouts of depression or addiction during quarantines.

The United States continues to have a disproportionate level of deaths from the coronavirus.

Adjusting for population, only four advanced, industrialized nations — Belgium, Italy, Spain, and the United Kingdom — have had a higher rate of coronavirus deaths.

Many more nations in that category have seen lower rates of coronavirus deaths. In fact, at least 10 such countries have death rates at least 80% lower than the United States: Denmark, Finland, Iceland, Norway, Australia, Japan, South Korea, Singapore, New Zealand, and Taiwan. 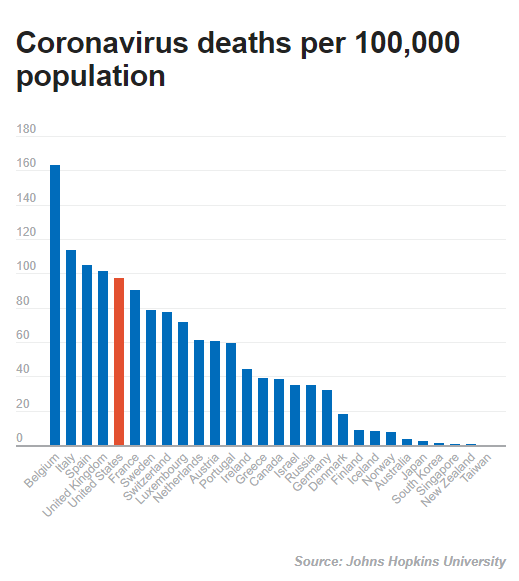 Email interview with Brooke Nichols, assistant professor in the department of global health at the Boston University School of Public Health, Dec. 21, 2020