The speeches: Trump’s 41-minute speech at Mount Rushmore in South Dakota on July 3, and 30-minute speech on Independence Day at the White House.

In a pair of speeches over July 4 weekend, President Donald Trump painted a grim portrait of the nation, saying it was populated by "far-left fascists," people who foment "violent mayhem" in the streets, and a generation teaching its children to "hate their own country."

The most attention-grabbing portions of the speech were those in which Trump outlined those he saw as the enemies of America and its values: his domestic political opponents. Trump described them as "the radical left, the Marxists, the anarchists, the agitators, the looters."

He singled out those who would tear down historical statues. "Our nation is witnessing a merciless campaign to wipe out our history, defame our heroes, erase our values, and indoctrinate our children," he said at Mount Rushmore. He added, "Against every law of society and nature, our children are taught in school to hate their own country."

Trump attacked the left for enabling a "cancel culture," calling it "the very definition of totalitarianism." "Make no mistake," he said in South Dakota, "this left-wing cultural revolution is designed to overthrow the American Revolution."

He also took aim at "those in the media" for slandering "generations of heroes," including "the young men who raised the flag at Iwo Jima, and those who perished fighting for freedom in the Civil War."

Trump repeated these themes throughout both addresses, which were made during a pandemic with little social distancing among members of his audiences.

Some of Trump’s comments were more in the tradition of usual July 4 celebrations. "The beauty and the glory of our constitutional system is that it gives us the tools to fight injustice, to heal division, and to continue the work of our Founding Fathers by expanding and growing the blessings of America," he said in his White House remarks.

Other comments were underscored by hyperbole. "No nation has done more to advance the human condition than the United States of America," he said at Mount Rushmore. At the White House, he said, "We are the descendants of the most daring and courageous people ever to walk on the face of the Earth."

Biggest applause line: "I am deploying federal law enforcement to protect our monuments, arrest the rioters, and prosecute offenders to the fullest extent of the law." This was followed by audience chants of "four more years." (Mount Rushmore remarks)

Music: A variety of patriotic songs at both events, plus Lee Greenwood’s "God Bless the USA" at Mount Rushmore. 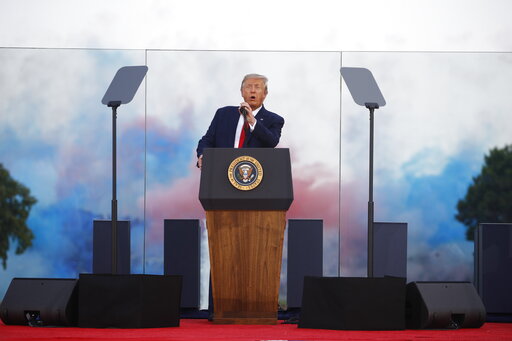 President Donald Trump speaks during a "Salute to America" event on the South Lawn of the White House on July 4, 2020. (AP)

We rated this False. Based on the Centers for Disease Control and Prevention’s numbers, the death toll from identified cases is about 4.5%. The hospitalization rate based on each day’s new cases has fallen over time, but it sits at around 4% as well. Public health specialists note that there are many ways the virus attacks the body, and even people who don’t need to go to the hospital can suffer from debilitating effects over the long term.

There’s a lot more to be learned about this disease, but nothing says that it’s harmless for 99% of the people it touches.

Christopher Columbus never made it to North America, only to the Caribbean and the coasts of Central and South America. Better examples of early colonial settlements in North America include St. Augustine, Fla., (1565), Jamestown, Va. (1607), and Plymouth, Mass. (1620). And some five centuries before Columbus, Norse explorer Leif Erikson reached Canada.

"The power of tariffs being imposed on foreign lands that took advantage of the United States for decades and decades have enabled us to make great trade deals where there were none." (White House remarks)

Whether Trump’s trade deals have been "great" is a matter of opinion, but a range of trade specialists told PolitiFact that Trump’s trade policy has, at a minimum, been less than successful.

Trump has not been able to get China to capitulate to structural demands. He’s made marginal gains in the U.S.-China trade balance and in U.S. manufacturing output. However, those have been undercut by significant retaliatory tariffs for the agriculture sector and wider harm to the economy from higher prices, supply chain disruptions, and slower economic growth.

"We’ve made ventilators where there were none by the tens of thousands, to the point that we have far more than we need." (White House remarks)

PolitiFact reported in April that it’s not accurate to say that the stockpile for goods like personal protective equipment and ventilators was empty before Trump took office. There weren’t enough supplies to prepare for the pandemic, however.

Still, the United States has made rapid progress in its efforts to find ventilators. In April, representatives from over 30 states told us PolitiFact they were not aware of any COVID-19 patients in their state needing a ventilator and not getting one. Many states were reporting excess supplies of the breathing machines.

"No other country has testing that we have — not in terms of the number." (White House remarks)

Trump’s correct that no other country has done more testing than the U.S. However, that statement doesn’t take into account the size of each country’s population. We reported in June that the U.S. still needed more testing to better track the spread of COVID-19 cases, given the severity of the pandemic.

The U.S. tests an average of 62 people for every 100,000, according to Johns Hopkins University. That’s far fewer than some countries, including Iceland, Singapore, Russia, Australia, Spain, New Zealand, and Canada.

"Angry mobs are trying to tear down statues of our founders, deface our most sacred memorials, and unleash a wave of violent crime in our cities." (Mount Rushmore remarks)

Some have characterized protests against police brutality following the killing of George Floyd in late May as violent riots. But that is an incomplete picture.

While looting, fires and other forms of destruction did spike in some major cities when demonstrations began, the protests grew to be largely peaceful in the weeks that followed. That pattern held in such cities as Minneapolis, New York, Washington, Los Angeles and Atlanta.

Donald Trump
stated on August 8, 2020 press briefing in Bedminster, N.J.:
“The Democrats don’t want to do anything having to do with protecting people from eviction.”

Linda Sánchez
stated on July 29, 2020 a press conference:
“The average cost of child care in this country is more than what it costs to send a child to college for one year.”

Donald Trump
stated on July 14, 2020 White House Rose Garden:
Says Joe Biden plans to “mandate net-zero carbon emissions for homes, offices and all new buildings by 2030. That basically means no windows, no nothing.”

Nancy Pelosi
stated on June 28, 2020 ABC News’ “This Week”:
Federal aid for state and local governments through a proposed coronavirus relief bill would amount to “half of what the Republicans put onto the national debt.”

Donald Trump
stated on June 20, 2020 a campaign rally:
“Joe Biden and the Democrats want to prosecute Americans for going to church, but not for burning a church.”

Facebook posts
stated on June 10, 2019 a Facebook post:
Says the "only valid reason to oppose voter ID is that you plan to cheat," and "every Democrat in Congress opposes voter ID."

Michael Bennet
stated on May 30, 2019 a CNN town hall:
"The vast majority of Americans believe that climate change is real and we need to do something about it."