Gov. Newsom Leaves Out Key Context In Claim 56% Of Californians Will Get Infected With Coronavirus

Gov. Gavin Newsom claimed in a letter to President Trump this week that a staggering "56 percent" of Californians "will be infected" with the coronavirus over the next two months. A day later, Newsom ordered all residents to stay at home and avoid all non-essential travel to slow the spread of the virus.

While his order made big news, so did his projection about how many Californians would get infected. News outlets around the globe ran with the statistic: The New York Post: "California governor says 25.5 million residents will get coronavirus." A French media outlet wrote: "California governor orders residents to stay home, says more than half could get virus." 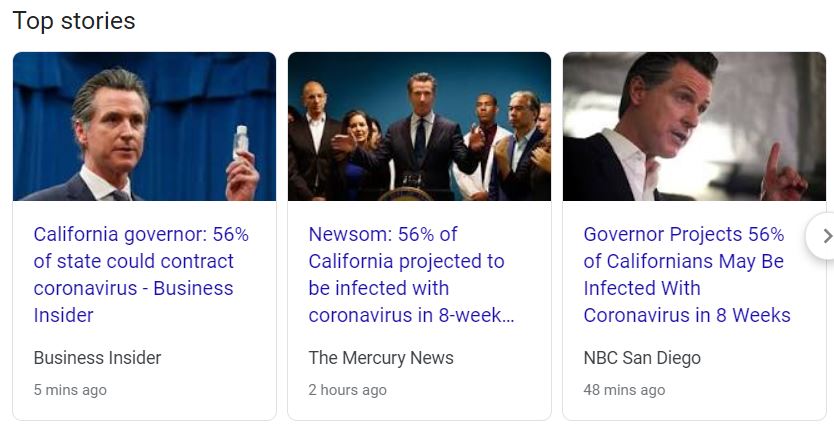 Gov. Newsom's claim about 56 percent of Californians getting infected with coronavirus was reported without key context by news outlets around the nation and globe.

The letter was dated March 18 and made public just hours before the governor’s stay-at-home directive. In the letter, Newsom asked Trump to deploy the USNS Mercy Hospital Ship to the Port of Los Angeles to help with the expected strain on the region’s hospital capacity from the virus. Right after making this request, Newsom makes his assertion:

"We project roughly 56 percent of our population — 25.5 million people  — will be infected with the virus over an eight-week period."

Given the intense focus on his words, PolitiFact California took a closer look at the governor’s statement and found it lacks crucial context. A governor’s spokesperson later acknowledged it doesn’t take into account any mitigation measures put in place before Newsom wrote to Trump, such as last week’s statewide school closures or the San Francisco Bay Area’s stay-at-home orders early this week.

We won’t place a formal Truth-O-Meter rating on it. It’s difficult to give a precise rating to a prediction.

Instead, we’ll examine what was known when Newsom made the claim, the reaction to it and the missing context the governor and his staff offered hours after his letter was published.

How Did Newsom Come Up With The 56 Percent Projection?

Mark Ghaly, the governor’s Secretary of Health and Human Services, explained at a press conference Thursday how the state came up with the 56 percent estimate.

He said the state knew a month ago it needed a model for projecting how fast the virus would spread and the strain it might place on hospital resources. State officials relied on "the best thinking from around the globe," to come up with projections, Ghaly said.

"Using the available literature, advice from the CDC and our understanding and experience in California, we applied a variety of different measures that looked at an attack rate," the secretary continued, referring to the rate at which people could become infected. He also noted the state projected "hospitalization rates."

"We knew that the attack rate of 56 percent that we chose was somewhat in the middle between the high-end and the low-end of what we’d seen in the literature," he said.

Ghaly added that the estimate is based on the scenario where "if we did nothing across California and it spread the way that we’d seen the spread of disease in other countries."

What Do Experts Say?

Several infectious disease experts told the San Francisco Chronicle that they viewed the 56 percent figure as "a worst-case scenario and, though certainly possible, unlikely to actually happen," the newspaper reported.

"I think the governor is acting wisely in asking for better preparedness, but the extreme, worse scenario is unlikely to come true," Stanford epidemiologist John Ioannidis told the Chronicle.

In a letter to Stat news published on Monday, Ioannidis said the data collected on the pandemic is unreliable, and the projections in turn are questionable.

After questions were raised about the statistic, the governor’s spokesman issued this statement yesterday:

"Gov. Newsom has been honest about the threat of the virus and its impact on the health and welfare of Californians. This projection shows why it’s so critical that Californians take action to slow the spread of the disease — and those mitigation efforts aren’t taken into account in that number," spokesman Nathan Click said in a statement, as reported by the Chronicle. "The state is deploying every resource at its disposal to meet this challenge, and we continue to ask for the federal government’s assistance in this fight."

The governor’s office did not respond today to more detailed questions, including why Newsom omitted the context about mitigation efforts.

Hours after the letter was published, Newsom provided more information about the 56 percent figure, during his press conference announcing the statewide stay-at-home order:

"The numbers we put out today assume we're just along for the ride, we're not. We want to manipulate this number down, that's what this order is all about," he said.

We asked Christine K. Johnson, an epidemiologist at UC Davis, about the governor’s projections. She told us she was not familiar with the models used by the governor, but noted the 56 percent figure "was well within" global estimates.

"The epidemic modeling shows a very bleak picture if we do nothing," Johnson added.

She said the governor’s order to shut down non-essential travel is necessary to prevent an overload of the state’s hospital system.

"I think the context is incredibly important," she said. "There’s no way people are going to do nothing. So, that’s unrealistic. It is in our power to ensure that no other people can get infected. I think if we maintain social distancing, we have ultimate control over the number of people that are going to get this virus."

Newsom claimed that 56 percent of Californians "will get infected" with the coronavirus, based on state projections. But he left out a massive point: His figure assumes that nothing is done to stop the spread of the virus. Yet huge changes were already underway statewide when he made his statement, from school closures to the Bay Area ordering nearly 7 million residents to stay at home.

Infectious disease experts described Newsom’s statistic as a worst-case scenario, something his letter failed to mention. Though the governor’s warnings are important, his words should have included this key context.

San Francisco Chronicle, Newsom: 56% of Californians could get virus if nothing done over 8 weeks, March 19, 2020

France24.com, California governor orders residents to stay home, says more than half could get virus, March 19, 2020