A fan stops to take a picture of a giant inflatable football player standing in front of the Husker Hounds sports apparel store in Omaha, Neb. Omaha has a mask mandate, but the state as a whole doesn’t. (AP Photo/Nati Harnik)

As the virus surges nationwide, one by one, governors who once resisted calls for stricter coronavirus measures have relented. Since November, Republican governors in North Dakota, Utah and Iowa have imposed tighter limits on gatherings and mandated masks.

But in a few statehouses, a raging virus is still seen as insufficient reason to dictate something as personal as a mask. Businesses like hair salons and restaurants must follow new rules, and some rules involve masks. But for the public at large, these states rely on individuals to decide to do the right thing.

Nebraska is one of the emerging hotspots where the politics of coronavirus policy have become more complicated. The virus’ second wave has come crashing down on people and places far removed from where the pandemic first appeared in the state. But despite pleas from health care providers, the governor stands firmly against a mandate, leaving it to local governments, businesses, school districts and individuals to devise their own approaches.

‘Our ICUs are all full’

In the spring, while states on the coasts were seeing widespread COVID-19 outbreaks, Nebraska’s was more concentrated. The coronavirus struck meatpacking plants in communities home to a large share of Nebraska’s Hispanic residents. It also threatened nursing homes.

Now, COVID-19 is in smaller communities, and afflicting people across the spectrum.

At the beginning of October, the state averaged about 470 new cases a day. By mid-November, that had shot past 2,300. Hospitals face a flood of COVID-19 patients.

"We’re pretty much full all the time now," said Russ Gronewold, the CEO of Bryan Health, a major medical center in Lincoln, Neb. "Our ICUs are all full and we’ve converted entire wards over to COVID-19 care."

Gronewold and other health care providers are caught in a tug-of-war that’s playing out across the state over how to rein in the pandemic as the footprint of the virus moves beyond the hotspots that were hit in the first wave.

Republican Gov. Pete Ricketts urges everyone to wear a mask. In news conferences, he backs that up with a cavalcade of ordinary people telling their stories of how they barely survived COVID-19. It’s the public health version of Scared Straight (the programs once used to deter kids from crime and drugs) with a strong dose of community responsibility thrown in.

About 160 miles west of Lincoln on the Platte River, the city of Lexington is home to two processing plants, one for meat and the other for animal byproducts. Hispanic workers dominate the production lines. They and their families account for over 60% of Lexington’s population.

When COVID-19 first came to Nebraska, it spread through factories like the ones in Lexington. Initially, plant managers resisted calls to keep workers separated, conduct testing and provide masks.

As with the rest of the U.S., COVID-19 has fallen particularly hard on Hispanic residents. They are 11% of Nebraska’s population but account for 27% of cases and 18% of deaths.

As workers fell sick or died, and some plants were forced to shut down, the companies changed their approach. State Sen. Tony Vargas, D-Omaha, said progress is mixed.

"Many of them have put in more measures to help their employees, some doing more and some doing less," Vargas said. "Some of the plants are not upholding their internal policies on mask wearing. We hear stories that if people test positive and don’t have symptoms, they are given the OK to come back."

COVID-19 safety in the plants remains a work in progress. Based on data from the University of Nebraska and the Covid Tracking Project, the use of masks and distancing appears to have helped. Cases and hospitalizations among Hispanics fell by at least 50% from their high point in the summer.

The community spread that is now hitting hard among whites has also led to a rise among Hispanics. On one hand, the impact is not falling so disproportionately on Hispanics anymore. On the other hand, many, many more people are suffering.

Norfolk, a city of about 25,000 people, is a two-hour drive northwest of Omaha. On Oct.1, COVID-19 killed local photographer Paul Filsinger. Weeks later, the Norfolk Daily News told the story of how Filsinger, 60, caught the virus while working at a wedding reception. Few guests wore masks. Typically, he wore a mask. That day, he didn’t.

Filsinger led an active life. Right after the wedding, he went camping in Wyoming. Within 10 days, with a persistent cough and his blood oxygen levels dropping, he checked in to his local hospital. A month later, he was gone.

"People believe masks don’t help, but right now, masks will buy us some time against COVID," his fiancee told the newspaper.

Moenning, Norfolk’s mayor, welcomed that blunt message. He told PolitiFact he’s been frustrated by the hardline rejection of masks and other precautions. He finds the politicization of masks "unhelpful." But he understands why that attitude could last.

"For a lot of people, the virus hadn't yet hit close to home," Moenning said. "But more and more that's starting to change.," 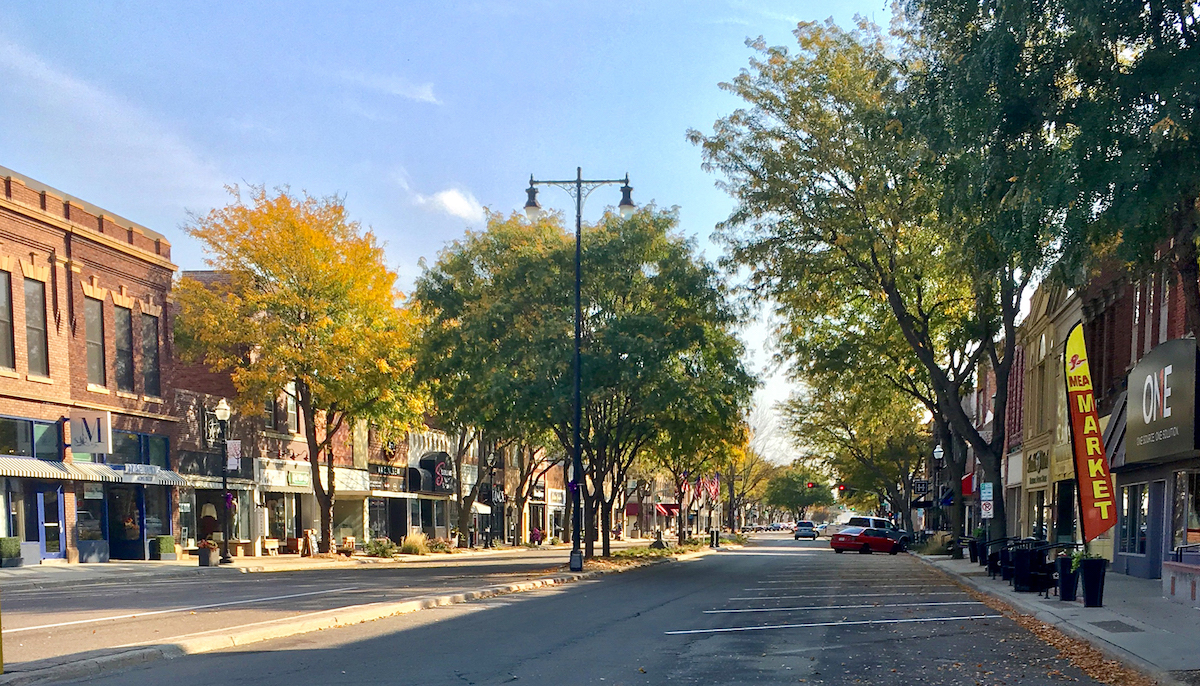 "We forget the way personal dynamics play out in small towns," Brett-Major said. "You see the same people at the store and church. From a mixing perspective, once you introduce a threat into that environment, it moves very quickly."

Moenning and other local leaders say masks have become more common. That’s partly due to fear of the virus, but also, they say, due to the schools. The schools made a winning case for masks that eased people into the practice.

In-person teaching is the rule in Nebraska schools, and in many places, that comes with the requirement to wear masks.

In districts like Bancroft-Rosalie Community Schools, 45 miles due east of Norfolk, some parents pushed back. But Superintendent Jon Cerny said two arguments won over reluctant households.

"They can handle a day or two of teaching their kids at home," Cerny said. "But nobody wants to go back to a month at a time. It's a lot of stress."

Parents also began to don masks, because they wanted to see their kids play basketball and volleyball. 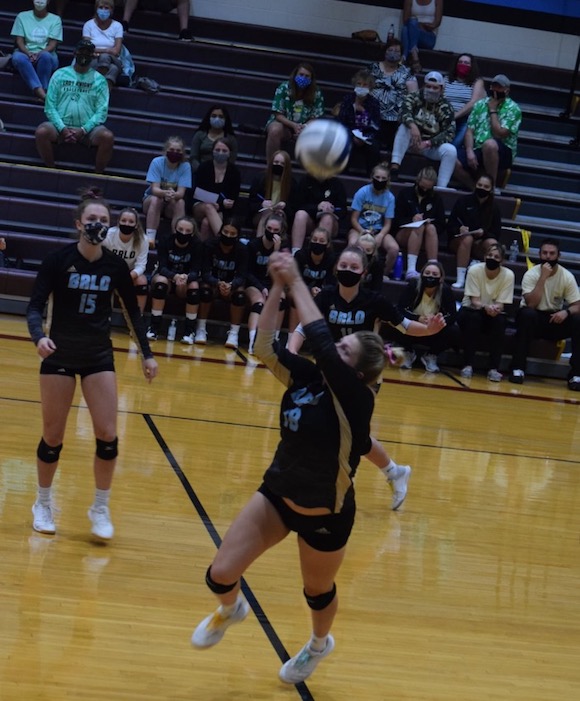 Volleyball match with masks for both players and fans at Bancroft-Rosalie Community Schools in Bancroft, Neb. (Rhonda Hansen)

"People respond to their sports here in Nebraska," Cerny said. "We wanted to give kids the opportunity to play, and people understood that if you want to keep them safe, you either eliminate fans or you wear a mask. People got that."

In Norfolk, Moenning aimed to put a mask requirement into effect in all public indoor spaces. The move required buy-in from the city council. To get there, he enlisted the help of the city’s two largest employers, the hospital and the steel and metal company Nucor.

"People from the business community have been talking to members of the city council," Moenning said. "They know that if we don’t get our numbers down, we could face another round of shutdowns. If we want to keep businesses open and maintain a strong economy, we need to do this."

A few days before the vote in Norfolk, the small cities of Kearney and Beatrice adopted mask mandates. On Nov. 23, the Norfolk council passed the measure unanimously, 7-0.

The politics of hospitals on the brink

At the statehouse in Lincoln, mask mandates remain a political lightning rod.

In response, the governor’s spokesman offered his own tweets, pointing out that the doctors who tweeted supported Joe Biden. One doctor fired back, "These are not political posts. They are a plea for our leaders to listen to the medical experts and help our community."

At Bryan Health, CEO Gronewold said his hospital has been flooded with patients from the nearly 50 rural communities the hospital serves.

"We’ve decided we need to get more forthright in getting in front of people and saying what we need," said Gronewold.

The disease has sidelined over 100 staffers at Bryan Health, including 39 bedside nurses. Some were exposed to COVID-19 and must quarantine. Others have tested positive.

"Lincoln has a mask mandate," Gronewold said. "They don’t have that in most outlying areas, and we need compliance."

The head of the state’s leading infectious disease center has also called for a statewide mask mandate.

In his most recent news conference, Ricketts warned that the state’s hospitals would soon reach a critical bed shortage, and he would impose tighter rules.

A broad mask mandate is not among them.

Nebraska Medicine, I’m sorry this post is so dark, but we need to get the word out about the COVID-19 situation in Nebraska, Nov. 11, 2020

Omaha World-Herald, COVID surges in Dakotas are warning of what may happen in Nebraska, Iowa, Nov. 15, 2020

Kaiser Family Foundation, With COVID-19 Cases Surging Again, States Are Taking Action, Though Current Efforts May Not Be Enough to Stop the Spread, Nov. 20, 2020

Occupational Safety and Health Administration, What is the risk to workers in the United States?, accessed Nov. 16, 2020