The misinformation campaign against Kamala Harris, what you need to know

Sen. Kamala Harris and Vice President Mike Pence are set to face off for the first time on the debate stage, and although we’ve seen heaps of misinformation about Harris – including false claims about her heritage and eligibility to hold office – there’s been much less about Pence, even dating back to July 2016, when Trump announced the former Indiana governor as his running mate.

Some are distortions; others are outright fabrications.

But why is Harris such a target?

Experts who track misinformation and disinformation campaigns, as well as those who study gender and politics, point to a few reasons.

One might be because Harris just ran for president — appearing on the national stage in 2019 — and came under a level of scrutiny that someone running for the nation’s highest office comes under, and then some. Her background and policies were laid out at the time, along with plenty of false rumors that have been recycled and embellished since she was announced as Biden’s running mate.

But experts say that the incessant attacks against Harris are heavily rooted in her identity as a Black woman — the first Black woman and first person of Indian descent to be nominated on a major party’s presidential ticket.

Some of the online misinformation about Harris

On social media, viral posts have questioned Harris’ eligibility to serve as president or vice president because her parents are immigrants. But Harris, born in 1964 in Oakland, Calif., is a natural-born citizen, and is thus eligible to serve.

Sharing of the false claim — similar in tenor to those unfounded claims that questioned President Barack Obama’s citizenship— spiked in the week after Biden announced Harris would be his running mate. An analysis by media intelligence firm Zignal Labs found such posts had more than 103,000 mentions on social media and TV that week.

The birther claims started when Harris ran for president, re-emerged when she was announced as Biden’s pick, and have since largely died out, said Jacquelyn Mason, a senior investigative researcher at First Draft, a nonprofit that fights online misinformation.

When it comes to racial identity, Harris has said that she simply views herself as "an American." Her mother was born in India and her father in Jamaica; the couple divorced when Harris was 7. Harris credits her immigrant mother for immersing Harris and her sister, Maya, in Black culture, recognizing that her interracial daughters would be viewed as Black. Harris said that she grew up being exposed to Hindu tradition, embracing Indian culture while living a proud African American life.

Still, some people have questioned whether Harris can be considered African American, when her father is Jamaican. But the implication that Jamaicans aren’t connected to Africa is wrong. The vast majority of Jamaicans hail from sub-Saharan Africa, according to both census data and genetic studies.

RELATED: A look at Kamala Harris’ multi-ethnic background and racial identity in the US 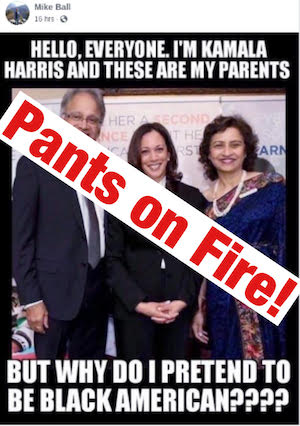 Other posts have wrongly suggested Harris wasn’t telling the truth when, during a primary debate, she said that she was bussed to school as part of a desegregation plan. "Kamala Harris claimed to be bussed in the 60’s due to segregation type issues," one post said. "She was born in 1964, thus 6 years old in 1970. Wth?"

Harris was 3 years old when the school board in Berkeley voted to desegregate the district’s elementary schools. And the process of desegregation was ongoing by the time she entered the public school system in 1970. A Berkeley Unified School District spokesperson confirmed to PolitiFact California that Harris would have been part of the second class to integrate when she was bussed across town.

Harris’ policy views on guns is another area that has been distorted online. Harris supports restrictions on firearms, but her stance falls well short of highly viral posts on Facebook that claim she said she would sign an executive order directing police to "show up at your door" and collect any guns that were not surrendered. This is neither Harris’ quote nor her position.

The false claims and fake quotes about guns attributed to Harris are the biggest pieces of misinformation currently still about her, Mason told us. 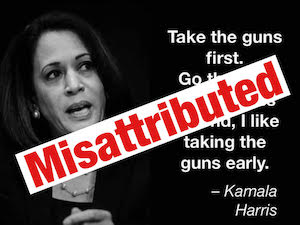 There hasn’t been a lot of new misinformation about Harris following the flurry of fabrications that bubbled up after she was announced as Biden’s running mate, experts said, but that may change following the vice presidential debate, and as Election Day inches closer.

Benjamin Decker, CEO of Memetica, a digital investigations consultancy, and former disinformation research fellow at the Harvard Kennedy School of Government, told PolitiFact that the falsehoods about Harris are largely recycled disinformation attacks from the primary, with added embellishments.

"All that's missing from the Harris-disinformation packet now is manipulated video, or cheap fakes, where they edit to remove content or splice bits together to create a false narrative," Decker said. "I wouldn’t be surprised if we see that in the next couple of weeks — it’s only a matter of time because they've done everything else."

The role of race, gender and politics in online misinformation

In politics, women — particularly women of color — face intense scrutiny and are often held to different or higher standards than their male counterparts, especially when running for positions in high levels of government.

"There has never been a woman president or vice president. The default image of these high-level positions of leadership is white men, with Obama being the one exception," said Debbie Walsh, director of the Center for American Women and Politics, a unit of the Eagleton Institute of Politics at Rutgers University.

"This is what happens to women when they seek those really high levels of positions of power: the questioning of their validity to even be there. They are held to a standard that men are not held to."

Attacks against female lawmakers tend to be aimed at undermining their qualifications, sometimes through sexist or racist tropes.

For example, as the youngest woman to be elected to Congress, Democratic U.S. Rep. Alexandria Ocasio-Cortez has been the target of countless fabrications, from fake quotes to doctored images, designed to discredit her or to make her look stupid.

"Most academic research shows women and particularly, women of color, are some of the most targeted identity groups on the internet," Decker said, "and so you have a candidate who is both a woman and a woman of color, and all this misinformation about her is just attesting and confirming that research in real-time."

"This is essentially targeted harassment," he added. "At the end of the day people are going to continue to use the things that have historically been used and focus on targeting her with misogynistic and racist memes rather than talk about the politics."

PolitiFact, A look at Kamala Harris’ multi-ethnic background and racial identity in the US, Aug. 14, 2020

Vox.com, Why the surge in racist misinformation about Kamala Harris is so worrisome, Aug. 14, 2020

Phone interview, Debbie Walsh director of the Center for American Women and Politics, of the Eagleton Institute of Politics at Rutgers University, Oct. 6, 2020