The new HBO documentary series “Q Into the Storm” by filmmaker Cullen Hoback attempts to shed light on the origins of the QAnon movement. Courtesy HBO

An HBO documentary series about QAnon ended with a big revelation: the unmasking of "Q," the anonymous internet poster who fueled the baseless conspiracy theory that gained a national following.

The finale episode of "Q Into the Storm" by filmmaker Cullen Hoback features an interview with Ron Watkins, the former  administrator of the fringe message forum 8chan (also known as its rebranded version 8kun). Alleged "Q drops" from the government insider found a home there after other sites banned the content.

Researchers, journalists and QAnon believers have guessed that Watkins was behind the Q persona and many of his cryptic and erroneous posts, but never had proof.

The docuseries offers more evidence than what has previously been reported, but it’s still circumstantial. Watkins doesn’t flat out admit he is Q, but he seemed to implicate himself in several slip-ups.

In one interview, Hoback asks Watkins how Q was able to post on 8kun during a stint when no other user could. Watkins’ response: "He tried really hard, I don’t know."

Here, we break down what the series revealed, and what experts think it means for QAnon going forward.

At the root of the QAnon movement is an unsubstantiated belief that an array of public figures are Satan-worshipping, cannibalistic pedophiles and former President Donald Trump was in charge of a covert effort to arrest and expose them.

QAnon emerged in October 2017 and is based on posts from Q, an anonymous person who claims to be a government insider with information on a "deep state" plot to work against Trump. Some adherents of the unfounded movement believe that Q is not just one person, but represents a group of people with high-level military intelligence. The term is a mashup of "Q" and "anon," an abbreviation for "anonymous." The letter Q is a reference to a high level of security clearance at the U.S. Energy Department.

Q began posting vague and false messages, known as "Q drops," on the fringe internet forum 4chan before moving over to 8chan, which rebranded as 8kun in fall 2019 after manifestos related to three mass shootings were posted on the platform. One of Q’s earliest predictions was the imminent arrest of Hillary Clinton. That didn’t happen.

The FBI described QAnon as a domestic terrorism threat. It has been linked to multiple criminal acts over the past couple of years.

Who are Jim and Ron Watkins? 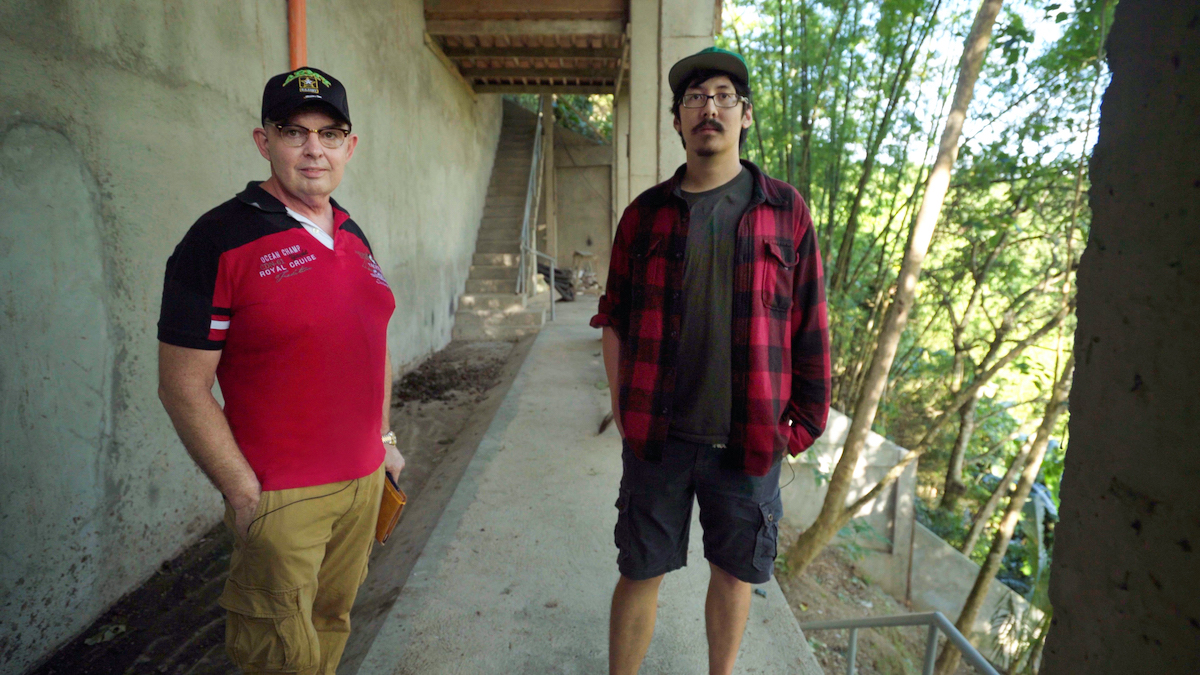 "Q Into the Storm" filmmaker Cullen Hoback spent three years following Jim and Ron Watkins in the Philippines, Japan and the U.S.

Ron Watkins is the son of Jim Watkins, the creator and owner of 8chan, a website known for amplifying Gamergate (an online harrassment campaign against women gamers) and hosting white supremacist hate speech. The younger Watkins served as the administrator of the forum from 2016 until he stepped down in November 2020.

After Q moved from 4chan to an 8chan message board in late 2017, the duo became the only people who could have conceivably had behind-the-scenes contact with the anonymous poster, elevating them to a new level of QAnon infamy.

Jim Watkins is a former U.S. Army helicopter repairman who moved to the Philippines in 2001. He was subpoenaed in 2019 by the House Homeland Security Committee and traveled to Washington to testify before lawmakers after multiple acts of deadly white supremacist extremist violence were linked to 8chan. The site went offline around that time and later rebranded as 8kun.

The docuseries said the elder Watkins as living in Sacramento, Calif., after he moved from the Philippines when it deemed him an "undesirable alien." We could not confirm Ron Watkins’ current residence, but the series reported that he was recently living in Sapporo, Japan.

What the documentary reveals

For example, at one point Q was able to post on 8kun when no other user could. When Hoback questioned Ron Watkins about this, he smiled and said, "He tried really hard, I don’t know."

In another interview, the younger Watkins talked about a post Q had made about a prominent QAnon promoter. When Hoback brought the name up later Watkins said, "I don’t know who that is."

In the pivotal scene that closes the series, Watkins spoke about his rise in popularity after repeatedly posting (on his actual social media accounts) baseless claims that the 2020 presidential election was stolen from Trump.

Both he and Hoback started laughing in what looks like a mutual realization of what happened. Appearing flustered, Watkins smiled, looeds away and said, "Never as Q, I promise. I’m not Q."

This is the big reveal in the finale of #QIntotheStorm where Ron Watkins says too much to Cullen Hoback and lets his guard slip.

It was so good it made the whole six hours worth it. pic.twitter.com/QzwTGNcl5q

Watkins continues to deny he’s Q, messaging his 150,000 Telegram followers after the finale was released: "Friendly reminder: I am not Q. Have a good weekend."

What this means for QAnon

Some QAnon researchers told us they do not believe the docuseries will change much about the movement. They also don’t believe "Q" is one person.

Joan Donovan, director of the Technology and Social Change Project at Harvard Kennedy School’s Shorenstein Center, told the Washington Post that she believes Q is a "collective ensemble of different interested parties" who have "different levels of knowledge and different access points to the infrastructure."

Q’s anonymity helped fuel the conspiracy movement in its infancy, but experts say it has largely outgrown the shadowy internet persona. Social media influencers with QAnon outlooks have amassed huge audiences over the years and continually churn out fabricated stories and baseless conspiracy theories.

"Having it anonymous allowed somebody to pretend to be a super secret agent in the government without there being clear evidence that they’re not," said Joseph Uscinski, a political scientist who specializes in the study of conspiracy theories at the University of Miami.

He added: "But in a lot of ways it doesn't matter anymore. We are focusing so much on ‘who is Q’ and all the different theories, but at the end of the day what we’re really talking about are people, and they’re still going to be the same people."

Uscinski likened it to a game of whack-a-mole. Discrediting singular theories isn’t going to change minds, he said, especially for those who have gotten to the point of believing QAnon. It’s the way adherents interact with information and society at large that needs to be addressed.

Q hasn’t posted anything since Dec. 8, as of this writing, so it’s hard to know how followers will take any clues if the posts return.

The Watkins interview also doesn’t resolve the question of who first posted as Q on 4chan in 2017 before moving over to 8chan. Researchers found that the interview barely registered with QAnon believers and was mentioned little on QAnon channels and forums on Gab, Parler and Telegram.

One final point: Most Americans either have not heard of the QAnon conspiracy or don’t believe what they have heard about it. While QAnon thrives online, polls show only about 5% of Americans actually believe it.

PolitiFact, What is QAnon, the baseless conspiracy spilling into US politics?, Aug. 27, 2020

The Washington Post, A QAnon revelation suggests the truth of Q’s identity was right there all along, April 5, 2021

Business Insider, The bizarre life of 8chan owner Jim Watkins, the middle-age veteran who decamped to the Philippines and runs a pig farm, Aug. 5, 2019

People, What This Documentarian Learned After Three Years Spent In the Deep Dark Rabbit Hole of QAnon, April 5, 2021

Pew Research Center, QAnon’s conspiracy theories have seeped into U.S. politics, but most don’t know what it is, March 30, 2020

Phone interview with Joseph Uscinski, a political scientist specializing in the study of conspiracy theories at the University of Miami, April 7, 2021