What the House Democrats’ impeachment memo leaves out

Democratic House impeachment managers walk through Statuary Hall in the Capitol to deliver to the Senate an article of impeachment against former President Donald Trump on Jan. 25, 2021. (AP)

• In an 80-page brief, House Democrats leading the impeachment outlined their case against former President Donald Trump and argued that there is historical precedent and legal basis for the Senate to try him after he has left office.

• The Democrats argue that Trump was “singularly responsible” for the violence. He was the most prominent leader calling for a “fight.” But others in his orbit played a role, and more than 200 people have been arrested in connection with the riot.

In their opening brief against Donald Trump, House impeachment managers argued that the former president spent months fueling misinformation about the 2020 election, culminating in a Jan. 6 rally that whipped a crowd of supporters into a "frenzy" and "aimed them like a loaded cannon down Pennsylvania Avenue."

The Democrats’ 80-page memo further argued that a president can be tried and convicted even after leaving office.

"Presidents do not get a free pass to commit high crimes and misdemeanors near the end of their term," the brief said.

The Democrats’ brief, along with a 14-page defense from Trump’s lawyers, offer a preview of arguments both sides will likely make during the Senate trial, which begins Feb. 9. We reviewed the arguments of Trump’s lawyers and found that they brushed over Trump’s months-long campaign to overturn the election. At points, they gave credence to Trump’s false election claims that were widely rejected in courts.

The Democratic memo, meanwhile, accurately quotes Trump’s falsehoods about the election and his incendiary rhetoric, and catalogs judges’ decisions rejecting his post-election arguments.

Some of the Democrats’ statements require context, and others make conclusions that are not readily verifiable — about Trump’s state of mind, for example.

Here are several excerpts from the Democratic document that require more context.

During the riot, Trump was described by those around him as "borderline enthusiastic" and "delighted" and "confused about why other people on his team weren’t as excited as he was."

These characterizations stem from media reports that use anonymous sourcing from officials around Trump, meaning they aren’t independently verifiable.

For instance, CNN’s chief White House correspondent, Kaitlan Collins, tweeted: "White House officials were shaken by Trump's reaction to a mob of his supporters descending on the Capitol today. He was described to me as borderline enthusiastic because it meant the certification was being derailed. It has genuinely freaked people out."

The memo also cites Sen. Ben Sasse, R-Neb., who told radio host Hugh Hewitt that he had spoken with senior White House officials and said: "As this was unfolding on television, Donald Trump was walking around the White House confused about why other people on his team weren’t as excited as he was …. He was delighted." 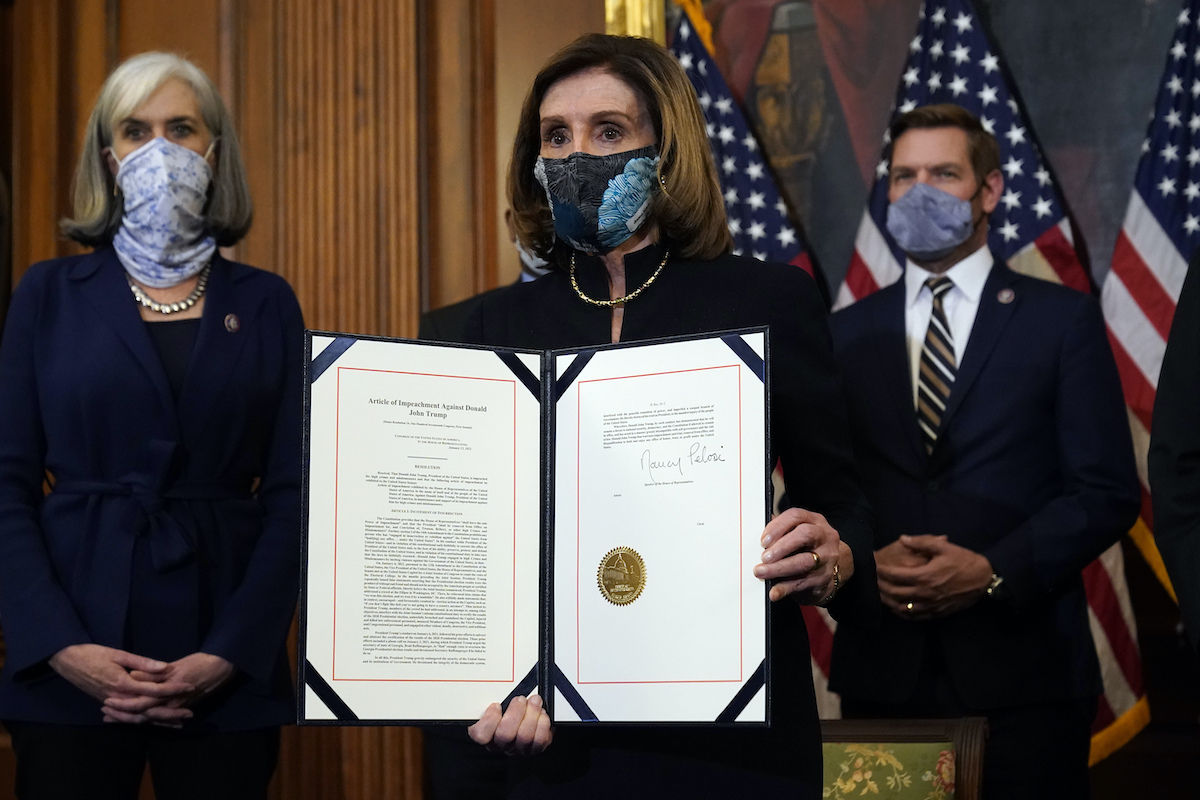 "Before a single voter cast a ballot in the 2020 presidential election, President Trump made it clear that he had no intention of abiding by the verdict of the American people."

Trump's comments may have implied this, but it’s impossible to know for sure what his intentions were.

The memo accurately cites Trump’s comments months before Election Day about whether he would accept the results. "No, I’m not going to just say yes. I’m not going to say no, and I didn’t last time either," he told Fox News’ Chris Wallace.

In August, Trump said the only way Democrats could win would be if the election were "rigged,"a ridiculous claim that we rated Pants on Fire. Following his loss, he continued to falsely claim that the election was stolen and called on his supporters to "fight."

However, Trump has been shown to make impulsive, attention-drawing comments that were more complaints or vague taunts than clear statements of his intentions.

"President Trump is singularly responsible for the violence and destruction that unfolded in our seat of government on January 6."

Trump was the most prominent leader who urged his supporters to "fight" and "stop the steal" for several weeks before the events of Jan. 6, but he wasn’t the only one. Some of his fiercest allies also made incendiary statements, including his attorney, Rudy Giuliani, who said at the rally, "Let’s have trial by combat." And to date, more than 200 individuals have been charged in connection with the storming of the Capitol.

"The crowd was armed, angry and dangerous"

It’s not clear that all or even most of the thousands of people in the crowd were armed. In fact, only a small proportion of rioters who have been arrested so far are known to have been  carrying guns or other deadly weapons.

In all, police recovered a dozen guns and thousands of rounds of ammunition from seven people who were arrested before and after the Capitol riot, according to an NBC News tally from court documents that had been made public through Jan. 13. However, many of these were discovered in cars parked elsewhere in Washington and were not accessible to members of the crowd during the storming of the Capitol.

As for weapons found in or near the Capitol during the insurrection, one man who was stopped as he exited the Capitol grounds was carrying a loaded handgun. A man who made it into House Speaker Nancy Pelosi’s office was carrying a stun gun, according to prosecutors, while another who didn’t make it into the building was carrying brass knuckles.

The argument that the Senate lacks jurisdiction over Trump as a former official "is wrong."

Legal and congressional scholars mostly agree that a former official can be tried in the Senate, but even experts who advocate this position say the opposite position is defensible.

The Democratic brief cites legal experts who say the Senate can try a former official, including a bipartisan group of more than 150 constitutional scholars who signed a letter obtained by Politico that says "the Constitution permits the impeachment, conviction, and disqualification of former officers, including presidents."

The Congressional Research Service has written that while the Constitution leaves the question open to debate, "most scholars who have closely examined the question have concluded that Congress has authority to extend the impeachment process to officials who are no longer in office."

The clearest precedent for trying a former official is a case from 1876, when Secretary of War William W. Belknap resigned just hours before the House impeached him on bribery charges. The Senate went ahead with the trial and acquitted him.

Politico, Legal scholars, including at Federalist Society, say Trump can be convicted, Jan. 21, 2021

The Conversation, "It is difficult, if not impossible, to estimate the size of the crowd that stormed Capitol Hill," Jan. 8, 2021

Congressional Research Service, "The Impeachment and Trial of a Former President," Jan. 15, 2021

PolitiFact, "Can Congress impeach and remove a president who’s left office? A look at the history," Jan. 26, 2021