• There is little to stop the House Democratic majority from holding an impeachment vote quickly.

• There’s a strong, but not bulletproof, argument that the Senate can hold a trial after President Donald Trump has left office. The main purpose for doing this would be that a conviction would be necessary to bar Trump from holding public office again. That would occur on a separate, simple-majority vote.

• Once the Senate starts a trial, it could tend to other business, but it would have to temporarily recess the trial to do so.

In the waning days of Donald Trump’s presidency, the House is moving toward impeaching him — for an unprecedented second time.

On Jan. 11, House Speaker Nancy Pelosi, D-Calif., said the House will pursue impeachment if Vice President Mike Pence and the Cabinet do not quickly proceed with removing Trump under the 25th Amendment. An article of impeachment has already been submitted, charging Trump with "incitement of insurrection" for speaking to a rally of supporters that later stormed the Capitol. Five people died.

Democrats say they already have 218 co-sponsors, which would be enough to pass the measure as soon as midweek. "The president’s threat to America is urgent, and so too will be our action," Pelosi said.

We have covered the impeachment process extensively in the past. But the rapidity of the current effort has raised questions we hadn’t fully addressed before. Here are some questions and answers, based on interviews with multiple legal and congressional experts.

Are there any significant procedural obstacles to the House impeaching Trump in the next few days?

There is not enough time left in Trump’s term to do a traditional impeachment process like the nation saw in 2019 and 2020. But the House has the ability to act quickly and super-charge the process.

"The House makes up new rules almost weekly, using special rule resolutions reported by the Rules Committee and adopted by the House to fast-track matters outside the regular order," said Donald R. Wolfensberger, director of the Congress Project at the Woodrow Wilson International Center for Scholars. In addition, "a motion or resolution of impeachment is a matter of high constitutional privilege that presumably would not need a special rule other than to extend and allocate debate time beyond the hour rule."

"The speaker has her majority in line, and that is what counts," said Michael J. Gerhardt, a University of North Carolina law professor. "She will call the shots."

Frank O. Bowman III, law professor at the University of Missouri, said there’s even a precedent: The House impeached President Andrew Johnson after the Civil War three days after his firing of the Secretary of War, which spurred the impeachment.

"Everything could happen in hours and days," said Stephen M. Griffin, a Tulane University law professor. "The House of Representatives is built to act quickly."

What is the purpose of impeaching him so close to his departure from office? Why bother?

Numerous arguments can be made for impeachment this late in a term.

One is practical. James Robenalt, a lawyer with expertise in political crises, and John Dean, former White House counsel for President Richard Nixon, told PolitiFact that the most important reason would be members of Congress "perceive that Trump intends to continue to incite insurrection, which could become an armed insurrection. That threat, or the threat he might use military force at home or abroad as a pretext to stay in power, could cause them to act."

Along the same lines, they said, is the possibility that "Trump might pardon those who engaged in insurrection, or himself, or both," they said by email. "Those kinds of pardons would be unacceptable to the American people, but difficult to litigate in the courts because the pardon power is so broad and unlimited."

A second reason is for accountability. "There needs to be some official response, even if it’s in a symbolic way — not just for what happened on Jan. 6, but essentially for the prolonged effort by the president to overturn a valid election," such as a call to Georgia’s secretary of state to "find" enough ballots to overturn the state’s result, Bowman said.

"Treason, sedition, insurrection — all fit the classic definition of ‘high crimes,’ or crimes against the state," Robenalt said. "This cannot go without response."

A third reason is deterrence of future actions of this sort. And a fourth reason is that impeachment, followed by a Senate conviction, is a necessary step to barring Trump from holding public office again.

Senate rules prescribe a more formal and time-intensive process for removal following an impeachment. "But a determined supermajority could change that in a morning," Bowman said. In other words, if two-thirds of the senators were ready to convict Trump and remove him from office, they could overcome other procedural obstacles quickly.

If Trump is impeached by the House, does the Senate need to start the trial immediately?

The relevant factor is not when the impeachment vote in the House occurs, but when the official paperwork is forwarded to the Senate. So the speaker could decide to delay transmission of the paperwork, and in fact may want to do so in order not to overload the Senate with extra business as it ponders confirming the cabinet picks of incoming President Joe Biden.

Another factor is that the Democrats are on track to claim the powers of the Senate majority after Biden and Vice President-elect Kamala Harris are sworn in. Once the elections of Georgia Democrats Jon Ossoff and Raphael Warnock are certified and they are both sworn in, the chamber will be tied, allowing Harris, as Senate president, to break ties in the Democrats’ favor. This is relevant because the House’s decision to impeach may receive a more favorable response in a Democratic-controlled chamber than one held by Republicans, as is currently the case. 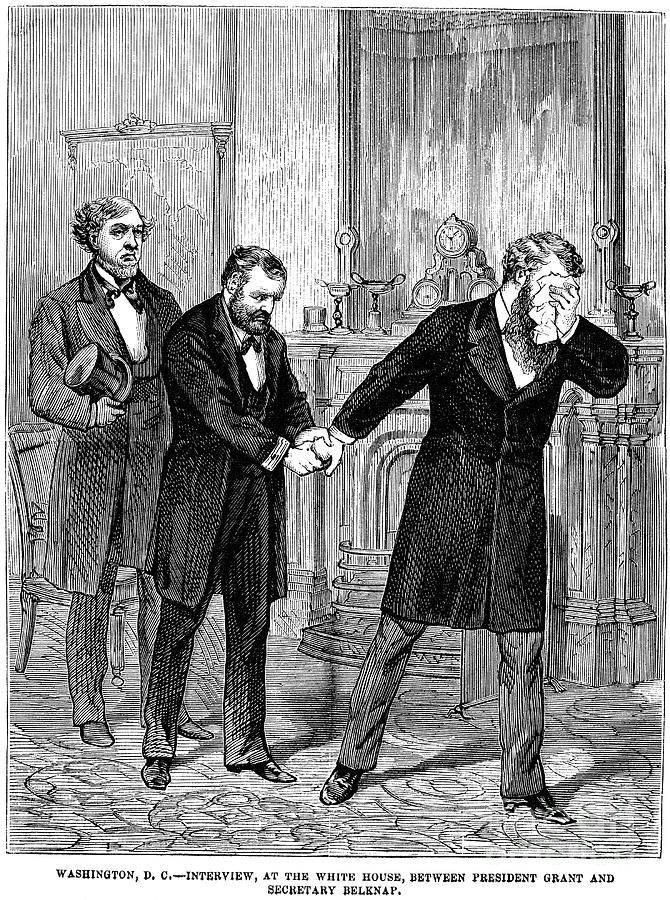 William Belknap, President Ulysses S. Grant's secretary of war, resigned in the face of impeachment in 1876, but was impeached anyway.

Can the Senate start an impeachment trial after Trump leaves office?

The permissibility of a "late impeachment" isn’t a slam dunk, but there’s historical precedent and a credible legal argument for it, experts say.

While the constitutional text "is unclear, the history underlying it is not," Brian Kalt, a law professor at Michigan State University, wrote in a 2001 paper on the subject. "Late impeachment was practiced in England and, unlike other aspects of English impeachment, was never explicitly ruled out in America."

In fact, at the time of the Constitutional Convention in 1787, "a late impeachment was raging in London, and state constitutions addressed the issue and allowed them," Robenalt said.

The precedent involves a case from 1876, when Secretary of War William W. Belknap resigned just hours before the House impeached him on bribery charges. The Senate went ahead with the trial anyway and acquitted him on Aug. 1, 1876.

There’s also a practical reason for holding a trial of an impeached former official: The Senate can, and often has, taken a second vote after conviction on barring the individual from ever again holding public office. A trial and conviction would need to be held before that second — and, for a former official, more consequential — vote could be held.

"In the spirit of the impeachment clause, late impeachment provides a way to punish wrong-doing by an officer late in his or her term of office," despite some constitutional uncertainty, said Steven Smith, a Washington University in St. Louis political scientist.

What would have to be done to keep Trump from holding office in the future?

First, the Senate would have to convict him by a two-thirds vote. After that, there would be a separate vote on disqualification from future federal offices. Experts agree this second vote would only require a simple majority.

In the past, the Senate has used a simple majority vote to bar three people, all federal judges, from holding office.

Can the Senate do other business while it handles an impeachment trial?

On Jan. 11, Biden said he had the "hope and expectation" that the Senate could handle a trial and other legislative business at the same time. Experts said this is possible, though it would require some extra steps.

"The Senate can meet in legislative or executive session on the same calendar day as it meets for a trial," Smith said. This means that when the trial is underway, senators can’t simply engage in other business. However, they could pause the trial and go into a different type of session to handle other matters.

As long as the Senate can get enough support, the chamber can proceed however it wants. "If they wanted to receive the impeachment in the morning and convict by 5 p.m., they could do it, as long as they get a sufficient number of senators to support that," Bowman said.

What would happen to Trump's pension and Secret Service protection if he's removed?

If Trump is removed from office before his term ends, then he would automatically lose his lifetime pension. His Secret Service protection would remain intact.

Most of the benefits afforded presidents were passed in 1958 as part of the Former Presidents Act. An annual lifetime pension of about $200,000 and annual travel allowance of up to $1 million are enumerated in the law, which says those benefits apply to presidents "whose service in such office shall have terminated other than by removal pursuant to section 4 of article II of the Constitution of the United States of America." That section spells out the process by which a president may be removed from office. The penalties don’t apply if Trump leaves the presidency without a Senate conviction.

Daniel Funke contributed to this report.

PolitiFact, "Using the 25th Amendment or impeaching Trump: Could they happen?" Jan. 7, 2021

Brian Kalt, "The Constitutional Case for the Impeachability of Former Federal Officials: An Analysis of the Law, History, and Practice of Late Impeachment," 2001

Email interview with Donald R. Wolfensberger, director of the Congress Project at the Woodrow Wilson International Center for Scholars, Jan. 11, 2021