• Former President Donald Trump’s letter to the editor included a host of dubious allegations that sought to cast doubt on Joe Biden’s 2020 presidential victory in Pennsylvania, but there is ample evidence to demonstrate that Biden won the state.

• The state certified the election following county-level audits. After the certification, it undertook a different type of audit that confirmed no major discrepancy with the final tally.

• Trump and his allies lost virtually all of their legal challenges after the election, and none changed the result in the state. Even judges appointed by Republicans were unsparing in their dismissals of Trump-aligned arguments.

According to the official certified results, Joe Biden won Pennsylvania in the 2020 presidential election by 80,555 votes, flipping the state from a Donald Trump victory in 2016.

According to Trump, there’s no way that happened legitimately.

"The election was rigged," Trump wrote in an Oct. 27 letter to the Wall Street Journal editorial page. "This is why Democrats and the Fake News Media do not want a full forensic audit in Pennsylvania."

The letter was the latest example of Trump doubling down on debunked claims about the election.

Trump’s letter raised suspicions about mail ballots, voter registration and the behavior of election officials. (We have previously debunked many of Trump’s falsehoods about the Pennsylvania election as well as those in social media posts, as have other media outlets.)

Trump’s claims were widely debunked, and media analysts criticized the Journal for allowing him their platform to air them. A day later, the Journal’s editorial published an unsigned column that cast skepticism on many of Trump’s assertions, while remaining firm on the decision to publish the letter.

There is renewed discussion of election results in Pennsylvania because some Republican state lawmakers have called for an "audit" of the results. Trump drew some of his information from Audit the Vote PA, an outside group with GOP ties that claims to have exposed "the fraud."

The calls are similar to ones in Arizona that resulted in a review in Maricopa County. Despite being launched by Arizona state Senate Republicans and promoted by Trump allies, that review found that Biden beat Trump in Maricopa County by about 45,000 votes.

Regardless, Trump is wrong, again, that he won Pennsylvania in the 2020 election.

"There is no evidence that there was widespread corruption," said Terry Madonna, a Pennsylvania-based political scientist at Millersville University.

Election officials, he noted, audited the election, and "almost all the state’s counties conducted an internal audit and reached a similar conclusion: No widespread corruption."

The Journal acknowledged as much, writing the day after Trump’s letter appeared that "the evidence doesn’t show anything real that could dent Pennsylvania’s 80,555-vote margin" in favor of Biden. 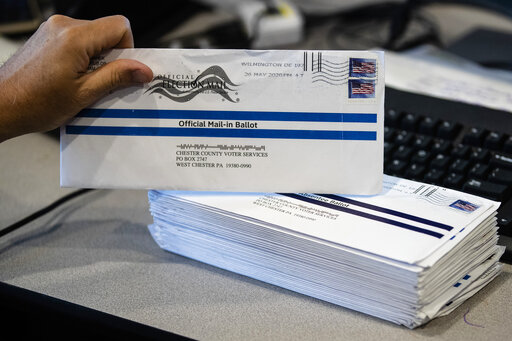 Mail-in primary election ballots are processed at the Chester County Voter Services office in West Chester, Pa., on May 28, 2020. (AP)

What happened on election night

Trump has cast doubt on how his early lead in Pennsylvania could have evaporated, saying it was a sign of fraud or questionable "ballot dumps."

On election night, Trump did have a "lead" in Pennsylvania early on, but in the days after, as more mail ballots were processed and counted, Biden pulled ahead and ultimately won, by about 1% of the vote.

However, there was nothing nefarious about this. In fact, this exact pattern of results was widely predicted before the election.

The counting process took longer in Pennsylvania than in other states because elections officials were prohibited from starting their work before Election Day. That meant that most of the votes counted on Election Day were cast in person, and two-thirds of them were for Trump.

That was in part because Trump had spent months falsely attacking mail voting as susceptible to widespread fraud, which discouraged his supporters from using the method. Meanwhile, Biden and Democrats encouraged their supporters to vote by mail, and in the end, Biden won more than three-quarters of Pennsylvania’s mail ballots.

In other words, the earliest vote totals reported for Pennsylvania skewed toward Trump, and the later ones skewed toward Biden. Votes from Pennsylvania’s Democratic strongholds such as Philadelphia, the Philadelphia suburbs and Pittsburgh tended to be tallied late, giving Biden a boost late in the vote-counting process.

The bottom line is that lead-switching between the candidates was not a sign of something amiss. It was a sign of the process unfolding and all ballots cast being counted. In fact, the same phenomenon gave false initial hope to Democrats in other states: Decision Desk HQ, a private vote-tracking firm, initially colored Florida, Kentucky, Ohio, South Carolina, and Texas blue for Biden based on the earliest returns, even though Trump would go on to win those states easily. In North Carolina, Biden was ahead as the first 80% of ballots were counted, before falling behind Trump after that. 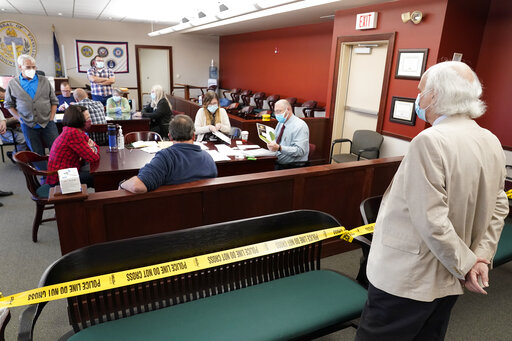 What led the state to certify the vote

The state also took steps after Election Day to verify the validity of the election, conducting two different types of audits.

A 1980 state law requires each county board of elections to conduct a sample of at least 2% of the ballots cast or 2,000 ballots, whichever is fewer, following the election. That process took place in November.

Each county then certified its presidential results, and on Nov. 24 Secretary of State Kathy Boockvar certified the results, showing that Biden won.

But the auditing process didn’t stop there. The state has been in the process of piloting another type of audit that it plans to use statewide in 2022.

All but four of the state’s 67 counties conducted "risk-limiting" audits that examined a random sample of about 45,000 paper ballots and compared them with the total reported by the vote-counting machine.

"The results of the sample mirrored the reported presidential election results across the participating counties within a fraction of a percentage point, providing confirmation of the accuracy of the vote count," the Pennsylvania Department of State wrote when those audits were complete.

Rachel Orey, a policy analyst at the Bipartisan Policy Center, said the combination of the county audits and the statewide risk-limiting audit "show with high confidence that Biden won the election in Pennsylvania."

Mark Lindeman, a director at Verified Voting, a group that monitors technological issues in elections, agreed. "Counties audited the ballots two different ways and both ways confirmed the original results," he said.

What happened with court challenges

Trump and his allies filed about a dozen lawsuits relating entirely or in part to the Pennsylvania results, but most failed, and none resulted in overturning Biden’s victory in the state.

The case that went the furthest, and which did result in a win for the Republican plaintiffs initially, was eventually rejected by the U.S. Supreme Court. The plaintiffs were appealing a decision by the Pennsylvania Supreme Court that had allowed the counting of mail ballots received up to three days after Election Day.

The 10,000 ballots in that category were kept separate while awaiting the court’s ruling, but in the end, they didn’t matter, given the scale of Biden’s 80,555-vote margin.

In some cases, the judicial rulings were blunt.

Trump’s campaign presented "strained legal arguments without merit and speculative accusations ... unsupported by evidence," wrote federal District Judge Matthew Brann. "In the United States of America, this cannot justify the disenfranchisement of a single voter, let alone all the voters of its sixth most populated state. Our people, laws, and institutions demand more."

Brann was nominated by Obama but is considered a conservative, and he lists membership in the conservative Federalist Society in his biography.

In a federal appeals court ruling that rejected a Trump challenge, Judge Stephanos Bibas wrote that "free, fair elections are the lifeblood of our democracy. Charges of unfairness are serious. But calling an election unfair does not make it so. … Charges require specific allegations and then proof. We have neither here."

Bibas was appointed by Trump, and the other judges on the three-member panel, Brooks Smith and Michael Chagares, were nominated by George W. Bush.

"No court in Pennsylvania ruled that there was any evidence to doubt the legitimacy of a Biden-declared victory," said Tammy Patrick, senior advisor to the elections program at Democracy Fund. "No audit found evidence that the results were questionable, or that there were voting system failures or anomalies. Results were certified by state and local election officials, Democrats and Republicans, who stand by the accuracy."

Officials who have vouched for the election’s validity

U.S. Sen. Pat Toomey, R-Pa., said days after the election that "I'm not aware of any widespread or systemic fraud or anything of the sort." In December, he rebuked Trump for pressing state legislators to overturn the state’s results. "It's completely unacceptable, and it's not going to work, and the president should give up trying to get legislatures to overturn the results of the elections in their respective states," Toomey told the Philadelphia Inquirer.

Following Brann’s ruling, Toomey said that Trump had "exhausted all plausible legal options to challenge the result of the presidential race in Pennsylvania"

Separately, Al Schmidt, the only Republican on the Philadelphia County Board of Elections, pushed back on Trump’s "ridiculous allegations."

"We just certified the results of the 2020 Presidential Election," Schmidt tweeted Nov. 23. "Despite all the meritless litigation and misinformation targeting our electoral system, I'm proud that the birthplace of our Republic held the most transparent and secure election in the history of Philadelphia."

For his comments, Trump called him a "RINO," and Schmidt received death threats.

Philadelphia Inquirer, "In vote fraud hunt, rising from defeat; Kathy Barnette's search for election fraud has rippled across the American election-denial movement and made her a GOP contender for the U.S. Senate," Aug. 1, 2021

Philadelphia Inquirer, "What to know about Pennsylvania Republicans' 'forensic audit' of the 2020 election," Sept. 24, 2021

New York Times, "He Wanted to Count Every Vote in Philadelphia. His Party Had Other Ideas," Dec. 16, 2020

PolitiFact, "Best practices for journalists covering the 2020 election: A report from the Poynter Institute," Sept. 20, 2021