A far-left group bombed the Capitol in 1983. Here’s how that’s different from the Jan. 6 attack

Unidentified people examine two of the three windows, Nov. 8, 1983, that were blown out the night before, as a result of the bomb blast that caused damage inside the building of the U.S. Capitol. (AP)

The one-year anniversary of the Jan. 6, 2021, attack on the U.S. Capitol by supporters of former President Donald Trump prompted some social media users to draw comparisons to another event nearly 40 years earlier.

"This is Susan Rosenberg and Linda Sue Evans, two left wing activist, who on November 7th, 1983 placed a bomb in the U.S. Capitol that tore through the second floor Senate wing in an attempt to assassinate republican Senators," said a Feb. 12, 2021, post that’s now recirculating on Facebook, with images of the two women. "The first domestic terrorist attack against our Capitol and democracy was by left wing activists not by Trump supporters on January 6th, 2021 as the main stream media and democrats are trying to make you believe."

The post — along with other posts referencing the 1983 bombing — was flagged as part of Facebook’s efforts to combat false news and misinformation on its News Feed. (Read more about our partnership with Facebook.)

The post refers to a real event, but its claims are not wholly accurate, and they paint a misleading picture of how the two events compare or are being portrayed.

There is no dispute that attacks on the Capitol have occurred before. In fact, within hours of the Jan. 6 riot, media outlets including PolitiFact, the Associated Press and National Geographic published articles about past violent incidents at the Capitol, including the 1983 bombing. More coverage followed in subsequent days and months, in the Washington Post, Politico, USA Today, BBC, Canada’s CBC and other outlets. The history of violent attacks on the Capitol goes back to before the construction of the building was finished.

As this coverage made clear, the 1983 bombing referenced in the post wasn’t even the first attack on the Capitol by domestic terrorists or left-wing groups.

The Jan. 6 attack was, however, unprecedented in its scope, nature and purpose: It involved approximately 2,000 people — supporters of a defeated presidential candidate — many of whom overturned barricades, clashed with police, stormed the building and tried to disrupt the certification of the 2020 presidential election results.

Five people died during or soon after the attack. And it led to Trump's second impeachment.

Even so, Trump supporters, media figures and Republican lawmakers have tried to downplay, deny or deflect blame for what happened that day.

At 10:58 p.m. on Nov. 7, 1983, a bomb tore through the second floor of the Capitol’s north wing. No one was killed in the attack, as the Senate had adjourned early and the adjacent halls were virtually deserted.

The bomb caused about $250,000 worth of damage, shattering mirrors, destroying furniture and damaging doors, wall partitions and art, according to the Senate website. The attack prompted additional security measures at the Capitol. 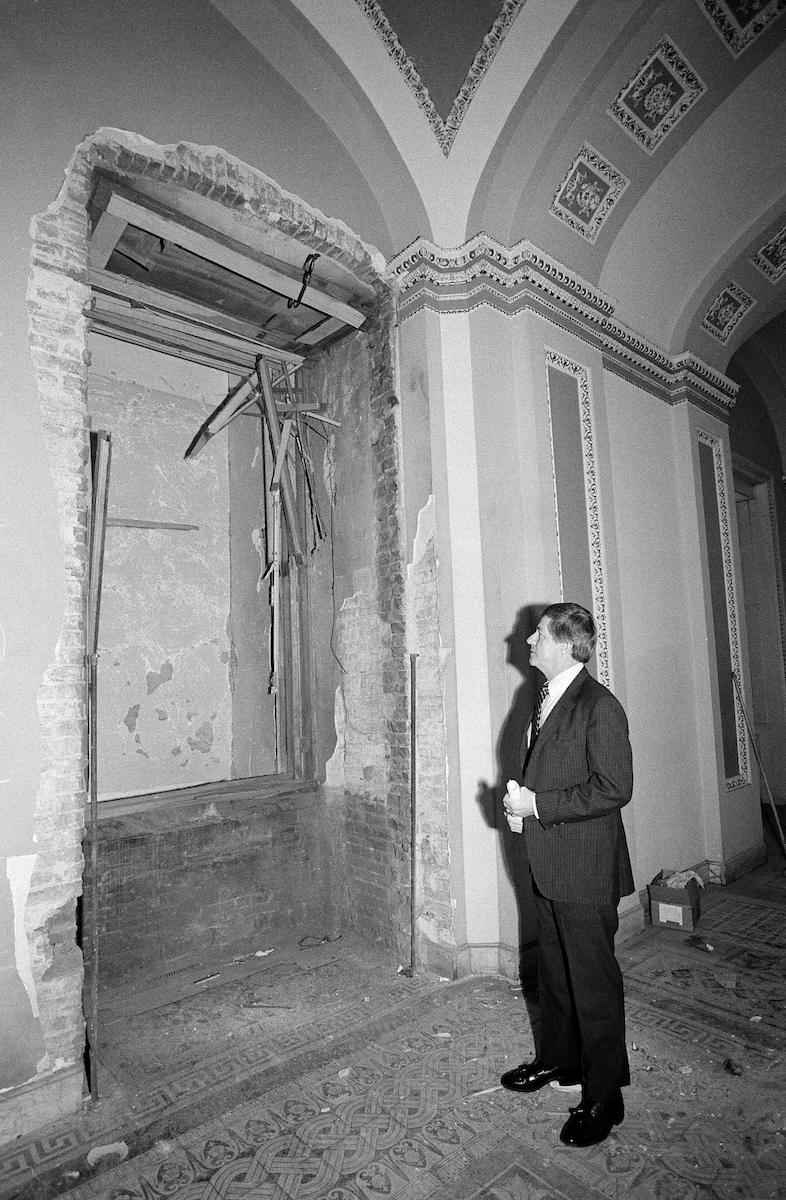 Sen. Mack Matttingly (R-Ga.), looks at damage caused by a pre-midnight explosion on the Senate side of the Capitol, Nov. 8, 1983. (AP)

The May 19th Communist Organization — which initially identified itself as the "Armed Resistance Unit" — took credit for the bombing, saying it was a response to U.S. involvement in Grenada and Lebanon. The organization was a far-left terrorist group created and led by women, according to experts.

Writing for Politico Magazine, historian William Rosenau said the group was responsible for a "string of violent and spectacular operations from 1979 to 1985," including armed robberies, prison breakouts and bombings of government buildings in Washington and New York.

Rosenau, author of a book about the May 19th Communist Organization called "Tonight We Bombed the U.S. Capitol," explained that the group "formed in the late 1970s to support armed struggles in southern Africa, the Middle East, Central America, Puerto Rico — and inside the American mainland."

Audrey Kurth Cronin, a professor of international security at American University who has studied and written about terrorism, said the 1983 attack was "part of a campaign of bombings" against American imperialism, particularly in Central America.

At the time, the May 19th group said the Capitol bombing was not an assassination attempt, contrary to the Facebook post’s claim: "We purposely aimed our attack at the institutions of imperialist rule rather than at individual members of the ruling class and government," the group said in a message to NPR. "We did not choose to kill any of them at this time."

After a five-year investigation, six members of the group — including Susan Rosenberg and Linda Evans — were arrested and charged with the Capitol bombing and other similar attacks.

"​​In 1990, a federal judge sentenced Marilyn Buck, Laura Whitehorn and Linda Evans to lengthy prison terms for conspiracy and malicious destruction of government property," the Senate website says. The court dropped charges against Rosenberg and two co-defendants, as they were already serving long prison sentences for related crimes.

Whitehorn and Evans were convicted and sentenced to 20 and five years, respectively. Buck was sentenced to 10 years.

At the end of his presidency in 2001, Bill Clinton commuted sentences for Rosenberg and Evans. Each had served more than 25 years.

In the past 15 to 20 years, the threat of domestic terrorism has mostly come from the far right, said Javed Ali, a professor at the University of Michigan’s Gerald R. Ford School of Public Policy who has worked at the FBI and the Department of Homeland Security. But looking at the past century, "there was just as much activity on the far-left spectrum as there was the far-right — and sometimes the far-left threat was even higher."

The 1983 bombing and the Jan. 6 attack targeted the U.S. Capitol and both were perpetrated by Americans with political motives. Beyond that, the circumstances were significantly different.

"While other attacks were carried out by lone wolves or a handful of disturbed individuals, January 6 was perpetrated by thousands of people who sought to overturn the results of a free and fair election," said Jane Campbell, president and CEO of the U.S. Capitol Historical Society. 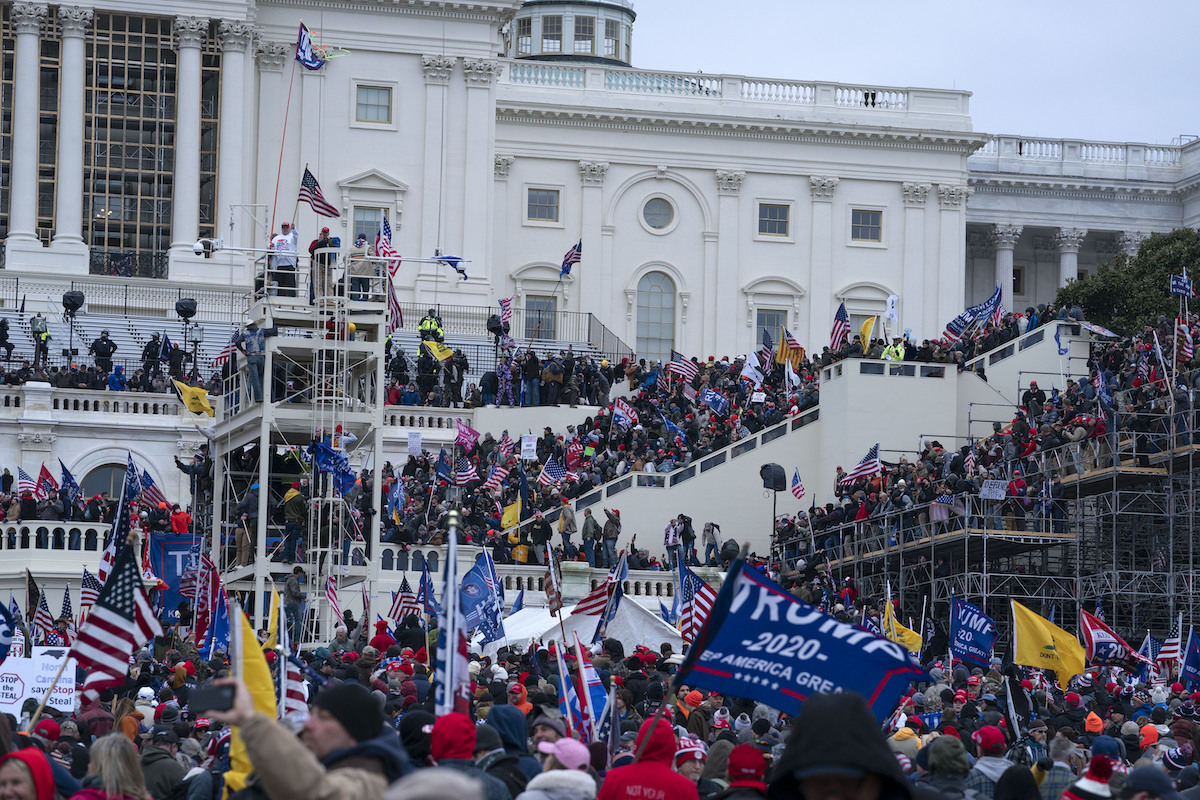 Supporters of President Donald Trump outside the U.S. Capitol on Jan. 6, 2021, in Washington. (AP)

Officials estimated that about 800 people breached the Capitol on Jan. 6. More than 750 people have been charged with crimes ranging from conspiracy to using a deadly or dangerous weapon or causing serious bodily injury to an officer. Of those, 216 people have pleaded guilty to one or more charges, and judges have sentenced 105 people, according to an NPR analysis.

The attack caused about $1.5 million worth of damage to the Capitol building, according to estimates by federal prosecutors. The cost of repairs, additional security and providing mental health services to people who were at the site means the total cost of the attack will likely exceed $30 million, according to U.S. Capitol operations and maintenance officials.

And the perpetrators were "encouraged by the president of the United States," said Cronin, the American University professor.

Just before rioters stormed the Capitol, Trump had held a rally where he falsely insisted he won the 2020 election, repeated baseless claims of election fraud and encouraged supporters to march to the Capitol and fight for their country.

"This is the first time in U.S. history there’s ever been any kind of extremist or criminal-related attempt to interfere" with the final certification of the presidential election, said Ali.

In comparing the significance of the incidents, Cronin said, the ideologies of the perpetrators don’t matter so much.

"You have to look at the acts," Cronin said. And on Jan. 6, "you had actions that resulted in the deaths of five people."

RELATED: A history of breaches and violence at the US Capitol

PolitiFact, "A history of breaches and violence at the US Capitol," Jan. 6, 2021

Interview with Javed Ali, an associate professor at the University of Michigan’s School of Public Policy, Feb. 18, 2022

American University, "The Capitol Has Been Attacked Before: This Time It Was Different," Feb. 9, 2021

Smithsonian Magazine, "The History of Violent Attacks on the U.S. Capitol," Jan. 8, 2021

The Washington Post, "Justice Department, FBI debate not charging some of the Capitol rioters," Jan. 3, 2021

The Washington Post, "Political extremists have attacked the U.S. Capitol before: A history of the violence," Jan. 7, 2021

USA Today, "Friday's attack is the latest violence at the US Capitol, the site of shootings, bombings and riots over the last 50 years," April 2, 2021

NPR, "​​The Capitol siege: The cases behind the biggest criminal investigation in U.S. history," accessed Feb. 18, 2022