Know who’s talking to you: A guide to interpreting Facebook political ads
By Jon Greenberg January 26, 2022

The midterm election campaigns have barely begun, and politicians and advocacy groups are already spending over $1 million a day on Facebook ads to energize their supporters and gain new ones. That pace will only increase as the voting nears.

Why do these ads show up in your feed? It may be because you match the advertiser’s target profile, or because someone in your network shared it.

The name of the Facebook page or account that placed the ad is always clear, but it might not tell you much. Phrases like "protect democracy," or "backing America" fit equally well for both conservative and liberal organizations.

There are, however, three steps you can take to learn more about who is trying to get your attention, and why.

Step One: Facebook has an ad library. With it, you can get more details, such as who paid for the ad, the sort of people who have seen it, and how much money the group is spending on all its Facebook ads.

If all you want is to get a sense of the group’s political leanings — conservative, liberal, libertarian, and so forth — the Facebook ad library might be enough. But if you want to go a little deeper, then you have a couple of choices.

Step Two: Search the web. Yes, this is simple and obvious, but the basics often pay off.  A visit to the group’s website (if it has one) can be revealing. Plus, your search might point you to what’s been written about the group.

Step Three: Go to the political money website OpenSecrets. Ideally, you can discover who is putting money into the group behind the ad. There are many ways for donors to stay in the shadows, so you might hit a brick wall. But even if the financial backers remain hidden, the OpenSecrets website and the organization’s reports can reveal the networks of political operations that lie behind the Facebook ad.

We’ll go through a couple of examples to show you how this works.

Finding the groups behind the ad

Many of President Joe Biden’s key campaign promises hinge on Congress passing the Build Back Better Act. This ad supporting the bill appeared on Facebook news feeds Jan. 11, from a page labeled Invest in America. 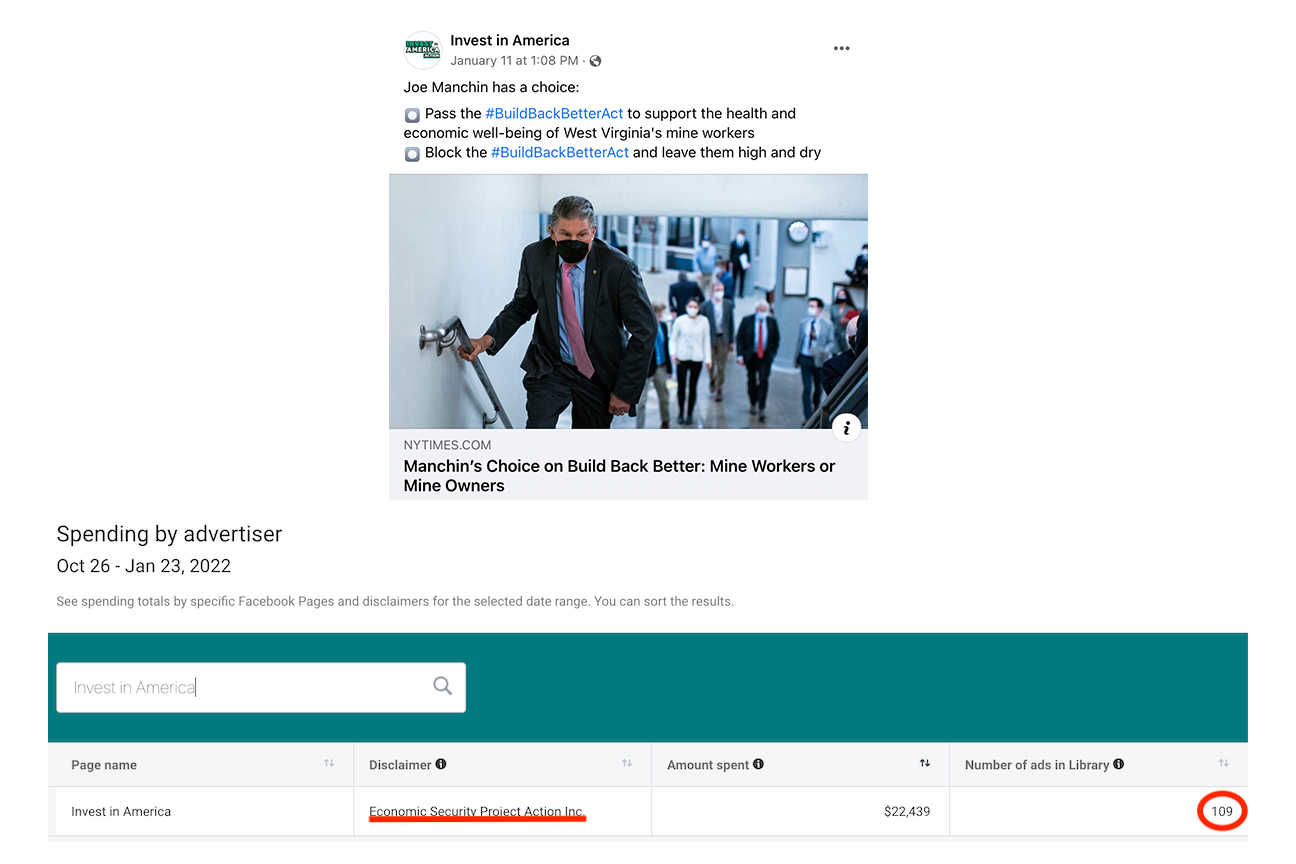 Search for Invest in America in Facebook’s ad library and you’ll see the ad is paid for by a group called Economic Security Project Action. You can also learn that this group spent about $22,000 in the past three months on 109 ads.

You can go a step deeper, too. The number of ads in the far-right column is a clickable link. Click it, and you’ll see images of all the other ads the group has purchased on Facebook. This sheds light on the range of topics the group tackles.

In this example, each of the ads gives a different reason or sales pitch to support the Build Back Better Act.

"Congress has always bailed out the big guys — the billionaires, the mega-corporations, the big banks and Wall Street execs — leaving working families in the dust. No more," reads one ad.

Another focuses on cutting taxes for middle-class families and creating jobs.

But who or what is Invest in America?

It’s a project of the group that sponsored the ad, Economic Security Project Action.

A simple web search will point you to the group’s website where you can glean several useful bits of information. The organization opposes the concentration of corporate power and backs providing a guaranteed income. The Who we are link shows that Adam Ruben is the director. Ruben’s bio places him in the left-leaning wing of the Democratic Party, with a list of past clients that includes Pro-Choice America and Run Warren Run, a group that hoped to see Sen. Elizabeth Warren, D-Mass., run for the presidency in 2016.

But details about its funding sources aren’t so clear. At the very bottom of the page, there’s a funding disclosure link. But instead of listing backers of the group that paid for the ad, it leads to information about an affiliate called the Economic Security Project (no "Action").

There is a list of funders, but it’s not obvious what the list means, said Anna Massoglia, a researcher at OpenSecrets.

"This could be an umbrella list, for supporters of both groups, or just the affiliate," Massoglia said. "They way they worded this, it doesn’t have to be complete, and it doesn’t give the amounts."

At this point, you’ve pretty much reached the end of the line for identifying specific donors. Neither of the affiliated organizations is required to disclose contributors.

But the affiliate relationship here gives a peek into an important dimension of political advertising. The groups you see on Facebook are often part of a larger network of related entities.

Massoglia took a comprehensive look at the organization at the center of the network that includes Economic Security Project Action. The group’s fiscal sponsor is the Sixteen Thirty Fund. During the 2020 election cycle, it funneled $60 million to political committees backing Democratic candidates, plus $200 million to groups that either directly pressed for certain policies, or gave to super PACs that distributed the money further.

Very little, if any, disclosure is required.

For those who want to persuade others, the beauty of online ads on Facebook is microtargeting. People’s profiles on Facebook and their browsing activity off the platform combine to generate enough information about age, gender, location and interests to help political groups and campaigns target their messages to specific audiences.

This is an ad that ran recently in Arizona, with a specific call to action:

"Critical Race Theory has NO PLACE in classrooms anywhere in America.

We must stop left-wing politicians who are trying to indoctrinate our kids with it.

Please add your name to our petition to BAN Critical Race Theory." 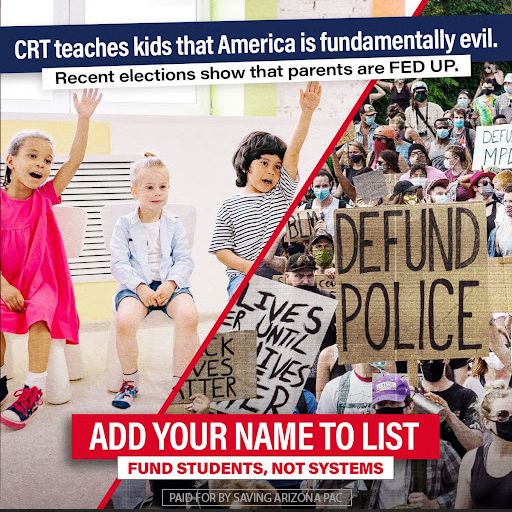 There’s no candidate, party or organization specified, except in the small print.

To see what this group is up to, search for the name of the PAC identified in the ad, "Saving Arizona," on the Facebook ad tool.

The results show that the image in this ad was used in over 50 other ads. To learn more about how those ads were targeted, click on the summary details button. 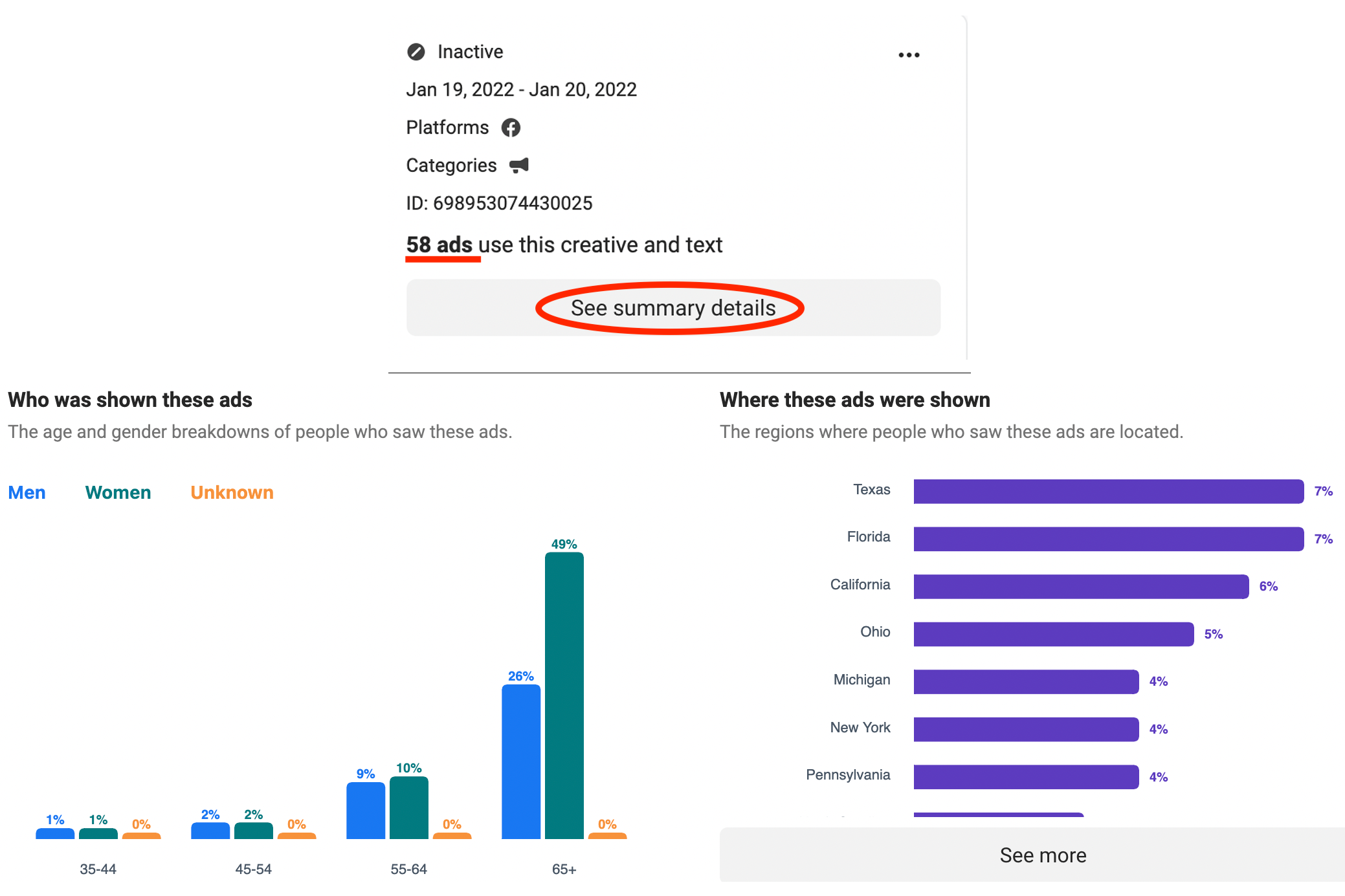 While the ad might focus on schoolchildren, it is aimed less at their parents than their grandparents. The chart shows a full 75% of the people who saw the ad are 65 or older. Half of the total are women. And while this ad comes from a group focused on Arizona, most of the people who saw this same image lived elsewhere, such as Florida, Texas and California.

The ad asks you to "add your name to our petition." Click on the ad and you’ll be brought to this page and discover this ad is actually promoting one particular candidate, though he is not identified by name.

If you don’t recognize the man shown between former President Donald Trump and Fox News host Tucker Carlson, one more step reveals who he is.

The Saving Arizona PAC paid for the ad. Go to OpenSecrets.org and a search on that group shows that this is a PAC that backs Blake Masters for U.S. Senate. And you can see that it has one donor — a wealthy one who gave $10 million. 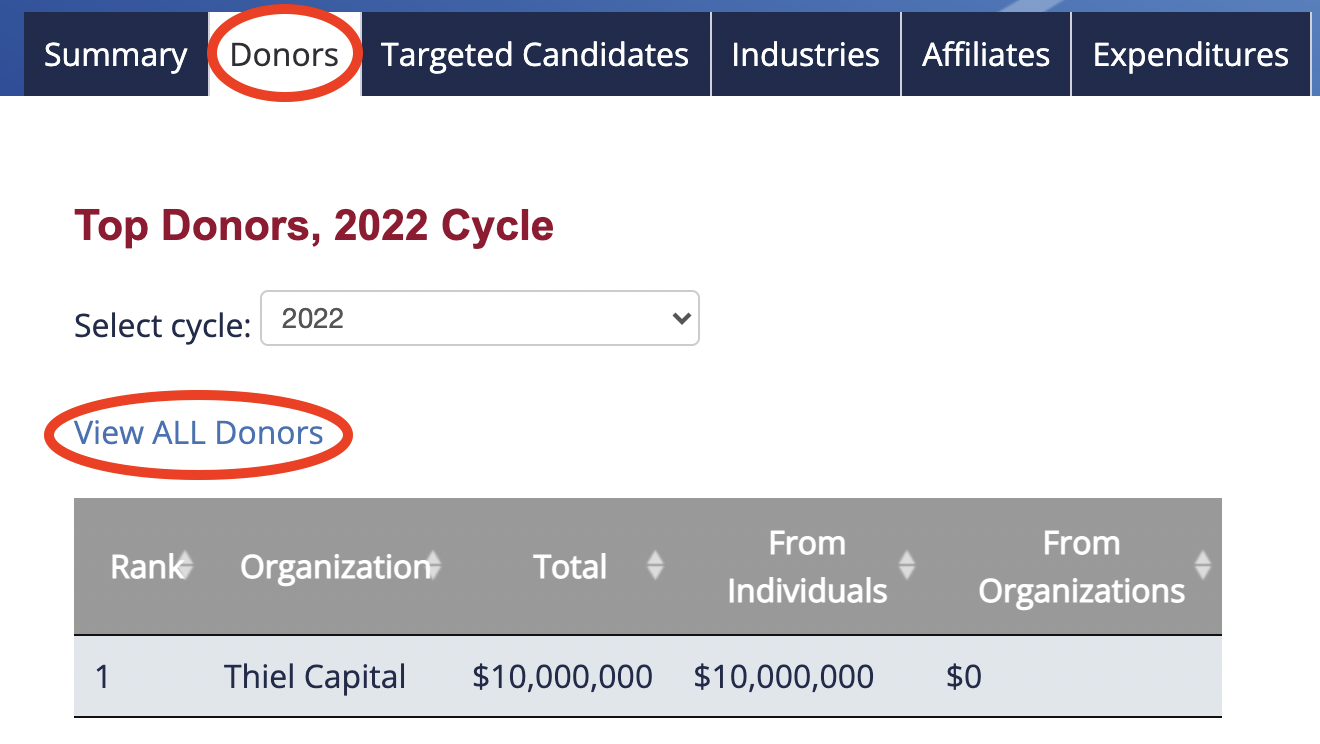 You will see the $10 million donor is Peter Thiel, co-founder of PayPal. Masters is the chief operating officer at Thiel Capital, and his boss’ financial support gives him a key boost in the Republican primary.

That primary race helps explain why the ad targets older voters. They are more likely to vote, which can be particularly helpful in primaries where turnout tends to be lower than in general elections.

One last thing to note. Look at the URL for the petition page; it’s on a site run by WinRed, an online fundraising platform for Republican and Republican-oriented causes. (The Democratic counterpart is ActBlue.)

The petition is a useful tool for building even more targeted lists of voters who are sympathetic to a particular cause. Facebook users would likely expect that once they sign the petition, they will be asked for money. What might be less obvious is why this ad appears in so many states other than Arizona.

In this case, the ad draws in people opposed to critical race theory. The ad contains inaccuracies about this academic school of thought and its alleged presence in the classroom, but the message has proven to be effective for Republicans.

The ad, Massoglia said, likely plays a role in a broader GOP campaign that seeks to leverage the critical race theory issue across many states.

"It’s not uncommon for lists to be sold or exchanged," Mossoglio said. "Lists that are built by these common operations are then shared with other political committees."

A Facebook ad about Arizona can end up as part of a larger effort to secure Republican victories, in Arizona and beyond. And that’s part of why it showed up in your News Feed.

Economic Security Project Action, Who we are, accessed Jan. 24, 2022