Ask PolitiFact: What can parents do if they can't find baby formula in stores?

Olivia Godden feeds her infant son, Jaiden, baby formula on May 13, 2022, at their home in San Antonio. (AP)

As the nationwide baby formula shortage continues, Abbott Laboratories, one of the largest manufacturers of formula in the country, announced it reached an agreement with U.S. health regulators to resume operations at its largest domestic factory in Sturgis, Michigan.

While this is welcome news for parents and caregivers scrambling to find food for their babies, Abbott said it will take around eight weeks before any new products reach store shelves.

The White House and the U.S. Food and Drug Administration announced steps intended to ease the shortage — including making it easier to import formula, cracking down on price gouging and expediting and streamlining processes — but it could still be a while before there’s any meaningful improvement.

Add that to strong recommendations against diluting formula or making your own, options pediatricians consider dangerous for infant health, and parents are left wondering what they can do now to safely feed their babies.

To answer this question, PolitiFact reached out to pediatric experts for advice and tips for caregivers in need of safe alternatives.

Some parents and caregivers are unaware that, except in special circumstances — such as babies who have allergies and are on specialized diets — most infants can transition safely from one formula to another, experts said. Regular formulas on the market are nutritionally the same, so switching to a generic formula or a different brand is typically fine.

"For most babies, it is OK to switch to any available formula, including store brands, unless your baby is on a specific, extensively hydrolyzed or amino acid-based formula such as Elecare (no store brand exists)," Dr. Steven Abrams, chair of the National Committee on Nutrition for the American Academy of Pediatrics, wrote in a May 16 post. If babies are on a specialized formula, Abrams recommended that parents and caregivers ask their pediatricians about alternatives that are safe and appropriate for their babies.

Families can also consider switching from one form of formula to another. Formulas come in three different forms: powder, concentrated and ready-to-feed.

"If transported or stored at incorrect temperatures, for example, the formula can lose some of its nutritional value," says the American Academy of Pediatrics.

Whether the formula is from the U.S. or elsewhere, experts advise to look for third-party certifications, such as those from the Clean Label Project. They also say parents and caregivers should consult with their babies’ pediatricians before making any switch — and to inquire about samples.

Other pediatrician tips for finding formula: 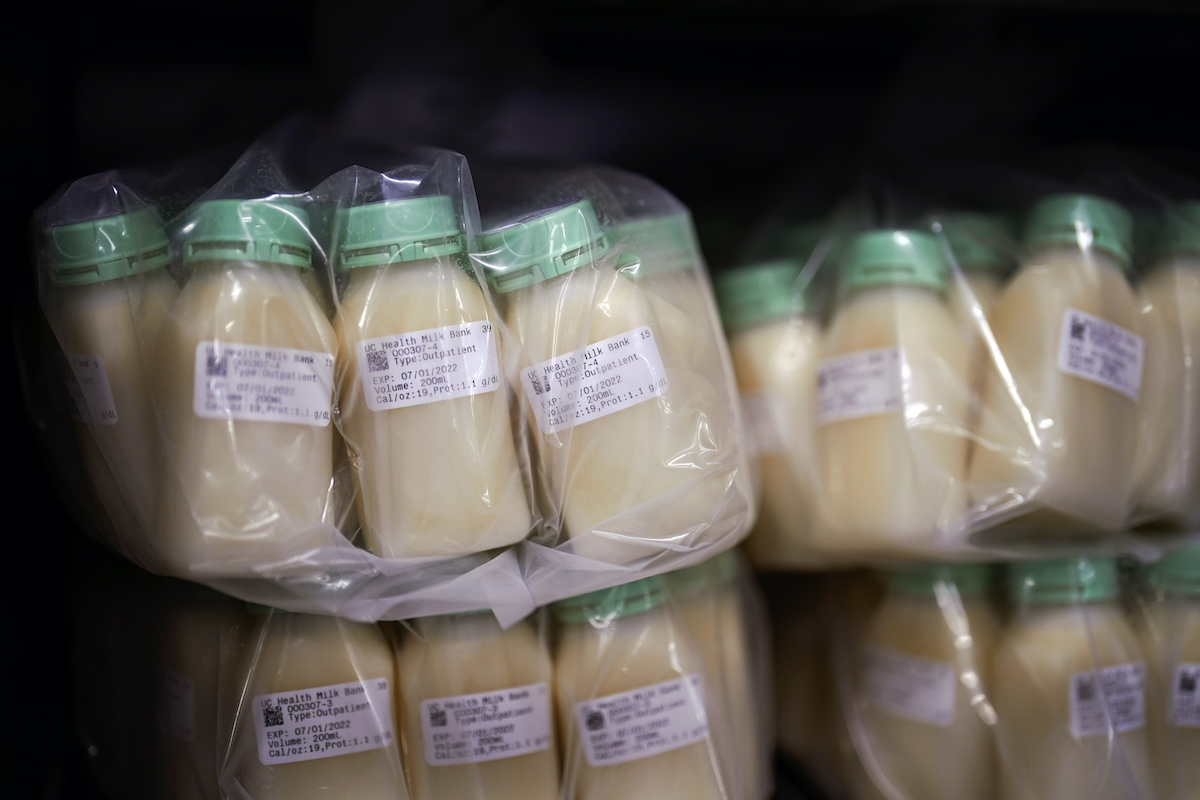 Pasteurized donor human milk sits in a refrigerator at the University of California Health Milk Bank, Friday, May 13, 2022, in San Diego. (AP)
Buying donor breast milk can also be an option

Milk banks typically operate as nonprofits and usually reserve donor breast milk for babies born prematurely or whose medical needs require them to rely on human milk. While babies with special needs are prioritized, banks are working to provide donated milk to families affected by the shortage.

Reputable banks screen and test donors before they can donate milk. These legitimate milk banks also pasteurize the milk and test it for potential infectious diseases and bacteria.

Parents and caregivers can ask their babies’ pediatricians for guidance or look up nearby listings from the Human Milk Banking Association.

Experts do not recommend informal breastmilk sharing, even via a family member or friend who is nursing.

If all other options are exhausted, there are a few things caregivers can do for a limited amount of time after consulting with their pediatricians.

Toddler formulas aren’t recommended for infants. However, toddler formula is safe for a few days for babies who are close to one year of age, the American Academy of Pediatrics says.

Formulas designed for babies who were born prematurely (and have "catch-up" growth to do) can safely be used to feed full-term babies for a few weeks if nothing else is available.

In an emergency, pediatricians also say cow’s milk could be a temporary alternative for a child on regular formula who is over 6 months old.

"In a pinch, you could feed them whole cow's milk for a brief period of time until the shortage is better," Abrams said. "This is not ideal and should not become routine. However, it is a better option than diluting formula or making homemade formula."

There isn’t a specific amount of cow milk that infants 6-12 months should drink in this situation, he said, but for children over a year of age, caregivers should limit it to no more than 24 ounces a day.

Cow milk is low in iron, so the biggest concern with giving it to an infant is making sure they get enough iron to prevent anemia, experts said. Doctors recommend that caregivers include plenty of iron-containing solid foods in their babies’ diet while using whole cow's milk.

RELATED: No, making your own homemade baby formula is not safe or recommended

RELATED: Ordering baby formula from Amazon in Canada has catches

RELATED: No, you can’t get free baby formula from your state by calling these numbers

PolitiFact, No, making your own homemade baby formula is not safe or recommended, May 13, 2022

The Bump, Parents Are Facing a Baby Formula Shortage: Here's What You Can Do, May 5, 2022

HealthyChildren.org, With the baby formula shortage, what should I do if I can't find any?, May 16, 2022

HealthyChildren.org, Is it safe to buy imported baby formulas online?, Updated May 11, 2022

U.S. Food and Drug Administration, FDA Encourages Importation of Safe Infant Formula and Other Flexibilities to Further Increase Availability, May 16, 2022

Email interview, Dr. Steven Abrams, chair of the National Committee on Nutrition for the American Academy of Pediatrics, May 16, 2022