Absentee voters can still cast ballots by mail in Delaware

President Joe Biden and first lady Jill Biden arrive to vote in the Delaware primary election at Tatnall School in Wilmington, Del., Sept. 13, 2022. The state's Supreme Court recently overturned a law that would have expanded voting by mail access. (AP)

A law that would have granted registered Delaware voters the right to vote by mail for any reason was struck down by the state’s Supreme Court on Oct. 7.

But that doesn’t mean no one in Delaware will be allowed to vote by mail. Voters can still use absentee ballots under certain circumstances, and those can be returned by mail.

That distinction didn’t stop some social media users from suggesting that the Supreme Court’s ruling outlawed all voting by mail.

"I’m so, so proud of my employee Nick Miles for suing the state of Delaware to ban mail in voting — and winning," conservative media personality and former Jan. 6 defendant Brandon Straka wrote on Facebook on Oct. 7. "And now, after Democrats appealed the decision, the DE Supreme Court supported Nick’s win!!"

The confusion stems from the phrase "mail-in voting" having been used broadly in elections discourse to refer to any voting method in which a voter is mailed a ballot and can return that ballot to election officials by mail.

Delaware law refers to "absentee voting," which is permitted only for people with specific excuses. A new law that would have allowed broader voting by mail for any voter was recently struck down by the state's Supreme Court.

Delaware’s Constitution says absentee voting is permitted when registered voters are unable to vote in person at their polling places on Election Day for specific reasons, such as:

Delaware residents can vote absentee either by mail or in person at the Department of Elections office in their county, according to the department’s website.

In 2020, when Delaware temporarily expanded its vote-by-mail system in response to the COVID-19 pandemic, more than 180,000 voters requested vote-by-mail or absentee ballots, Delaware Public Media reported. Before the pandemic, "just a few thousand people" voted absentee or by mail in Delaware’s 2016 state primary election.

In June, the state’s Democratic-controlled legislature passed a law that would have enabled all registered voters to cast a ballot by mail for any reason, if they had completed an application for a vote-by-mail ballot and mailed or delivered it to the Department of Elections.

Democrats argued that expanding mail-in voting options would increase voter participation. Those opposing the law, including many Republicans, argued that the law violated constitutional restrictions on absentee voting.

In a three-page order, the Supreme Court agreed with a lower court that "the vote-by-mail statute impermissibly expands the categories of absentee voters identified" in the state constitution.

As a result, Delaware’s Department of Elections’ site said that "no vote by mail ballots have been or will be mailed out for the 2022 general election."

The department said every voter who submitted an application requesting a vote-by-mail ballot for the 2022 general election was mailed a letter. It explained that the Supreme Court’s ruling prohibited the expansion of mail-in voting.

"What this means is that you will not receive a Vote by Mail Ballot from the Department of Elections for the 2022 General Election," read the letter. Instead, it said, people must vote one of three ways:

Does that mean all mail-in voting is banned?

Some people will be allowed to vote absentee by mail.

The Department of Elections’ website emphasized that the Supreme Court ruling had no bearing on absentee voting provisions — including mailed absentee ballots.

"Attention voters," read a large-type message on the site. "Absentee voting is unaffected by the Delaware Supreme Court ruling!" 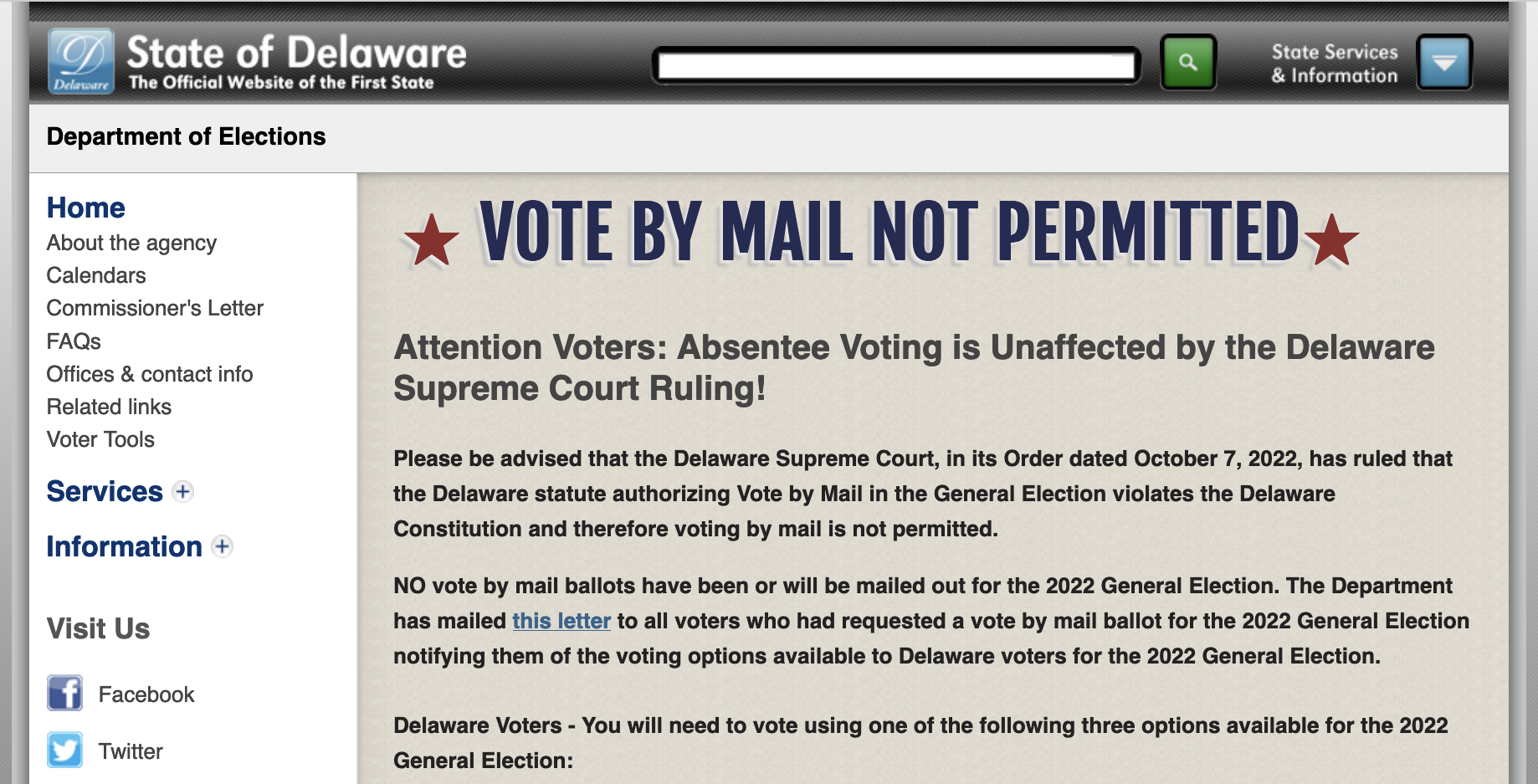 Claire Snyder-Hall, the executive director of Common Cause Delaware, said that yes, the Supreme Court had ruled the vote-by-mail legislation unconstitutional, which means that the right to vote by mail for any reason was banned in Delaware.

But those who qualify to vote absentee — meaning voters with one of the listed excuses — "can vote via the mail," she said.

State of Delaware Department of Elections, ​​Vote by mail not permitted, accessed Oct. 12, 2022

NPR, A judge unleashed a tirade on a prominent Jan. 6 defendant for his post-plea comments, Aug. 4, 2022

Delaware Public Media, High percentage of Delawareans voting by mail have sent in their ballots, Oct. 27, 2020