"Appoint a State Homelessness Secretary to oversee an Interagency Council on Homelessness – because we need statewide leadership laser-focused on this problem."

Eight months into his term as California governor, Gavin Newsom has set aside $1 billion to address the state's homlessness crisis, formed a task force to get at its root cause and pushed for speeding up the construction of new shelters.

But he's yet to hire a cabinet-level homelessness secretary, something he vowed to do during his campaign. And it's not clear whether he'll ever follow through.

"We must address homelessness. I'll create an interagency council to end chronic homelessness led by a cabinet-level secretary committed to solving the issue not just managing it," Newsom promised in a campaign video.

The lack of action on that specific pledge comes as the number of homeless people has grown in California communities, both big and small.

In Los Angeles County, homelessness jumped 12 percent to nearly 59,000 this year compared with 2018. Sacramento County saw a 19 percent increase to nearly 5,600, compared with two years ago. Merced County experienced an 18 percent rise this year to more than 600 people without a permanent home. The list goes on.

California is home to one quarter of the nation's homeless people, though it represents just 12 percent of the country's overall population. It also has the highest share of unsheltered homeless people, 69 percent, of any state.

Newsom offered a confusing response last week when asked by a Sacramento Bee reporter about his plans for the post. The Bee and San Francisco Chronicle subsequently reported he had decided not to name a homelessness czar.

The governor's spokesman later told us that's not necessarily the case, but declined to elaborate.

We'll examine his progress, or lack thereof, and then rate this promise on our Newsom-Meter.

Newsom has made some bold moves. In June, he signed his first budget dedicating $1 billion in homelessness funding. The bulk of it, $650 million, is reserved for cities and counties to build or expand emergency shelters, along with permanent supportive housing, job programs and projects such as hotel and motel conversions.

As part of the budget, he also signed a bill to streamline the development process for navigation centers, which offer shelter and connect people with a range of homeless services.

Early this year, Newsom appointed Sacramento Mayor Darrell Steinberg and Los Angeles County Supervisor Mark Ridley-Thomas to lead his newly created Commission on Homelessness and Supportive Housing, which the governor has referred to as his task force on the issue. It is expected to hold its first public meeting later this month. 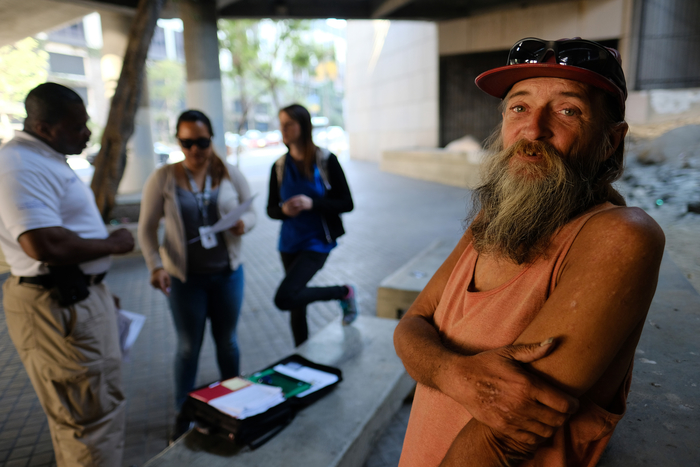 In this June 2016 photo, homeless man David Brophy, right, talks to People Assisting The Homeless (PATH) outreach team members who are helping him acquire an ID card on a street near where he lives in Los Angeles. (AP Photo/Richard Vogel)

Last week, the governor was asked by a reporter at a public event whether he was still going to appoint a cabinet-level secretary.

"I have that person in my office. It's interesting - we don't know if we want to announce that person as our czar," Newsom said, according to a transcript provided by Nathan Click, the governor's spokesman.

The governor went on to say, "We have that task force that, in essence, is my czar. Meaning the two leaders of that task force are the principal advisors. So they're de facto that position we announced on the campaign."

When asked whether those were cabinet-level positions, Newsom added: "To me that's a distinction that's insignificant. They're profoundly influential to me. De facto cabinet members. It's interesting, homelessness is one of my top priorities and they have complete universal access to me, more than, I would argue, even cabinet members, and so that committee is profoundly important and I look forward to good things coming."

Chris Martin, legislative advocate on homelessness at Housing California, said he's optimistic about the task force. But, he said, the state would benefit from a cabinet-level leader on the issue.

"With the current state of the crisis, and things being as drastic as they are, we really need someone to come in who is full-time staff," Martin said. "We want someone that can really focus solely on the job of addressing homelessness in our state. There's so much that we could gain out of a secretary or cabinet level position, really giving leadership around the issue."

Martin said that position, for example, could coordinate the patchwork of state programs and departments that touch on homelessness. His nonprofit found last year that six different state departments were funding a total of 16 different programs addressing homelessness.

Paul Tepper, executive director of the Western Center of Law and Poverty took a different view. He told us in April, "It depends on what the person can accomplish."

More important, he said, was the need to partner with the federal and local governments to solve the crisis.

During his run for governor, Gavin Newsom promised to appoint a cabinet-level homelessness secretary to address the state's crisis.

He's taken key steps to combat the problem, from setting aside $1 billion in his first budget and creating a task force to study the root causes of homelesness.

They might have that access. But there's no way the mayor of one of California's largest cities and a county supervisor in Los Angeles can devote as much time to the issue as a cabinet-level secretary. That's quite a stretch.

Newsom's spokesman told us the governor had not definitively dropped plans for a homelessness czar, though he would not elaborate.

Until there's actual progress on this particular promise, it has hit a wall.

We rate it "Stalled."

PolitiFact California, Gavin Newsom has made progress on some promises, but what about a state homelessness secretary?, April 15, 2019

PolitiFact California, What has California Gov. Gavin Newsom done so far for the homeless?, Feb. 25, 2019