Sarah Palin
stated on July 27, 2012 in her speech at a rally for Ted Cruz in The Woodlands:
Says 1 in 7 American families is on food stamps.

After speaking in support of Ted Cruz at a July 27, 2012 rally in The Woodlands, Sarah Palin signs autographs and talks to Cruz supporters. (Houston Chronicle photo by Johnny Hanson)

Shortly before Ted Cruz won the GOP nomination for U.S. Senate, he got a star-power boost from former Alaska Gov. Sarah Palin at a get-out-the-vote rally north of Houston.

Firing up the crowd in her July 27, 2012, speech in The Woodlands, Palin touched on some claims PolitiFact has recently addressed, plus one we haven’t: "One in seven American families are on food stamps."

Based on past PolitiFact work, Palin was batting better than .500 on these statements:

So how’d she do with her food stamp claim? Another hit, according to the experts we asked.

U.S. Department of Agriculture spokeswoman Alyn Kiel told us by email that Palin was correct -- in fact, one in seven individual Americans is on food stamps, aka the USDA’s Supplemental Nutrition Assistance Program. Kiel cautioned against translating SNAP’s term "households" to "families."

J.C. Dwyer, state policy director of the Texas Food Bank Network, told us by email, "Most of the time, a ‘household’ is roughly equivalent to a ‘family,’ and so contains more than one person. However, a single individual living alone is also considered a ‘household.’

"That's why one in seven individuals benefit from the program, and one in five households," Dwyer said.

He sent us USDA's monthly report for May 2012, which shows that 22.3 million U.S. households encompassing 46.5 million individuals were on SNAP. He calculated the "one in seven" and "one in five" ratios using the U.S. Census population clock and average household size in 2010 (2.59 people), he said.

An April 19, 2012, report from the non-partisan Congressional Budget Office said that, nationwide, "Spending on SNAP benefits more than doubled between 2007 and 2011." Charts from the report show an increase in participation after the recession began in 2007; CBO predicts the increase will peak in 2014. 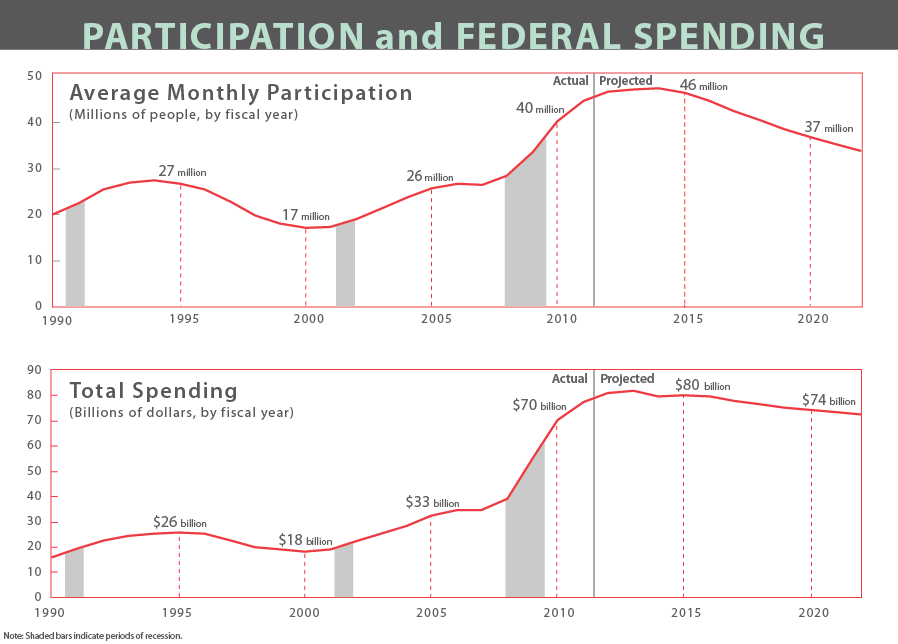 In Texas, SNAP participation has also risen compared to 2007, but has held fairly constant since early 2010.

Jonathan Lewis, a specialist in food policy for the left-leaning Center for Public Policy Priorities in Austin, emailed us a link to state data showing that the number of Texans on SNAP has remained within the range of 3.5 million to 3.7 million since March 2010, when it was at 3.4 million. The total was 2.3 million in July 2007 and 3.6 million in July 2012.

Lewis told us, "Palin’s statement about one in seven families on SNAP in the U.S. is correct besides her use of families rather than households. However, I think the public views them as the same."

Lewis included a link to the Texas Administrative Code’s definitions of families and households. For purposes of the SNAP program, the code defines a household as the person or persons included in a single SNAP case by state Health and Human Services. A family, the code says, is defined as a group of relatives living together and meeting certain other conditions.

The state data show 1.5 million cases, or households, on SNAP in Texas for July 2012.

Palin’s figure is supported and may even understate the share of families on food stamps. Her statement rates True.