Debra Medina
stated on December 13, 2013 in a press release:
"At present spending levels, only citizens of New York have a greater local debt burden than Texans."

In a Nov. 13, 2013, campaign press release, Debra Medina pledged that as Texas state comptroller she would "resist growth in government spending," saying, "At present spending levels, only citizens of New York have a greater local debt burden than Texans."

An earlier version of the claim sent out via email said simply "greater debt burden," not "local"; the campaign posted an updated release online.

We looked at state debt in a July 24, 2011, fact-check on Gov. Rick Perry, rating as Mostly True his claim that Texas had "the fourth-lowest debt per capita of any state in the nation, and we are the lowest of any of the big states."

How does debt shake out at the local level?

Medina, a tea-party favorite from Wharton, got 19 percent of the vote in the 2010 Republican gubernatorial primary against Gov. Rick Perry and Sen. Kay Bailey Hutchison.

The Medina campaign told us via email that her Texas-New York comparison was based on a Sept. 26, 2012, report, "Your Money and Local Debt," issued by the current state comptroller, Susan Combs. 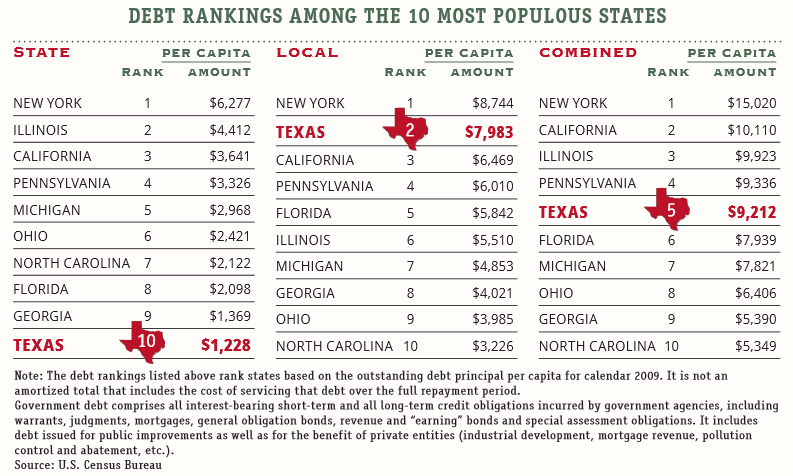 The report relied on 2009 U.S. Census Bureau data, which Combs spokesman R.J. DeSilva told us via email was drawn from the December 2011 annual report of the Texas Bond Review Board. That agency oversees the issuance of state bonds used to fund activities as varied as making housing loans to veterans and helping local governments finance water projects.

"State and local debt" are defined in the bureau’s July 2013 summary of 2011 data as "all interest-bearing short-term credit obligations and all long-term obligations incurred in the name of the government and all its dependent agencies, whether used for public or private purposes."

U.S. states divide local and state responsibilities in different ways. Texas spends little at the state level; local costs may be borne by hospital districts, school districts and the like in addition to city and county governments. The Census and Board both presented local debt estimates alongside state debt.

We next looked for comparisons using more recent data and all 50 states.

The Bond Review Board offers its own annual estimate of local debt in Texas. In the most recent report that was available when Medina’s release was sent out, published in December 2012, the agency said Texas’ local debt per capita was $7,507 in the fiscal year that ran through August 2011.

Board spokesman Robert Latsha told us by phone that, though he wasn’t certain exactly what the Census included in its figures, it’s likely the largest difference between the Census and board estimates comes from debt set up by quasi-governmental agencies such as local housing finance corporations or economic development corporations.

Only debt from bonds and shorter-term securities issued by local governments is reported to the board, Latsha said.

He said the board didn’t calculate comparisons with all 50 states. Census Bureau spokesman Joseph Dalaker told us by phone that the bureau didn’t either, but he helped us find data comparable to what the board probably used when comparing the 10 biggest states.

Using those Census estimates of local debt and state population -- from the most recent data sets available when Medina spoke in November 2013 -- we found Texas was third among all 50 states and, again, second among the 10 most populous.

Highest local debt per capita among all 50 states:

In the board’s December 2013 report, which came out after Medina made her statement, the state board updated local debt per capita in fiscal 2012 to $7,514 by its own estimation and $8,431 according to Census data, keeping Texas in second place among the 10 most populous states.

Medina’s claim referred to the debt burden falling on "citizens." But state residents might not be directly on the hook for the whole amount.

Dalaker told us, "You really have to tease out who’s paying." For example, taxes on tourists can help pay for projects, he said.

Moody’s Investors Service spokesman David Jacobson told us by phone, "What’s more important is your ability to pay back that debt and how it is structured." Many Texas entities have good credit, he said.

Medina said, "At present spending levels, only citizens of New York have a greater local debt burden than Texans," but without mentioning that her comparison was based on the 10 most-populated states.

Texas is second among the big states and third among all 50 in recent estimates. We rate her statement as True.