A reader forwarded an email to us in which state Rep. Senfronia Thompson urged a boycott of Macy’s department stores on the day after Thanksgiving 2013.

"The fact that Macy's doesn't support equal pay for women should stop you from shopping there on Black Friday," the Houston Democrat wrote, saying that her equal-pay proposal cleared the Legislature earlier this year, but "then Macy's sent a letter to Rick Perry urging him to veto the law, which he ultimately did."

An Aug. 6, 2013, news story in the Houston Chronicle reported that Texas Retailers Association members including Macy’s and Kroger’s had written Perry in May asking him to kill the legislation because, they said, it would lead to open-ended litigation and duplicate federal law.

Thompson spokeswoman Milda Mora told us by phone that the representative learned of the letters from the Houston Chronicle reporter in August and checked with the governor’s office, which provided her with copies that Mora emailed to us.

One written on Macy’s letterhead (click here or scroll down to view it) concluded, "The federal requirements under Lilly Ledbetter are unnecessary and would be harmful to Texas employers. We urge you to veto this legislation."

Macy’s spokeswoman Bethany Charlton confirmed that her company sent the May 31, 2013, letter, which was signed by a company vice president. By email, Charlton said the company "absolutely supports equal pay for equal work among men and women" but believes existing laws "provide strong remedies" for discrimination.

Perry’s logic was similar: "House Bill 950 duplicates federal law, which already allows employees who feel they have been discriminated against through compensation to file a claim with the U.S. Equal Employment Opportunity Commission," said his June 14, 2013, veto statement.

Progress Texas, the pro-Democratic organization that distributed Thompson’s email and is organizing the boycott, disputes Perry’s statement that the bill would have duplicated federal law, saying that the Ledbetter protections need to be codified in state law for them to apply to cases in state courts.

The group’s executive director, Ed Espinoza, told us by email that his group launched a boycott of Macy’s and other retailers when the news broke in August. An Aug. 7, 2013, Chronicle news blog post said Thompson took part in that boycott also, canceling a planned appearance at a Macy’s store to mark the state’s annual sales-tax holiday.

Mora said that Thompson, who was quoted in an Aug. 9, 2013 Texas Public Radio news story as saying she had previously been a "card-packing member of Macy’s," but had not shopped there since the letters became public.

As the Houston newspaper reported, Macy’s wrote the governor May 31, 2013, saying "We urge you to veto this legislation." The claim is True. 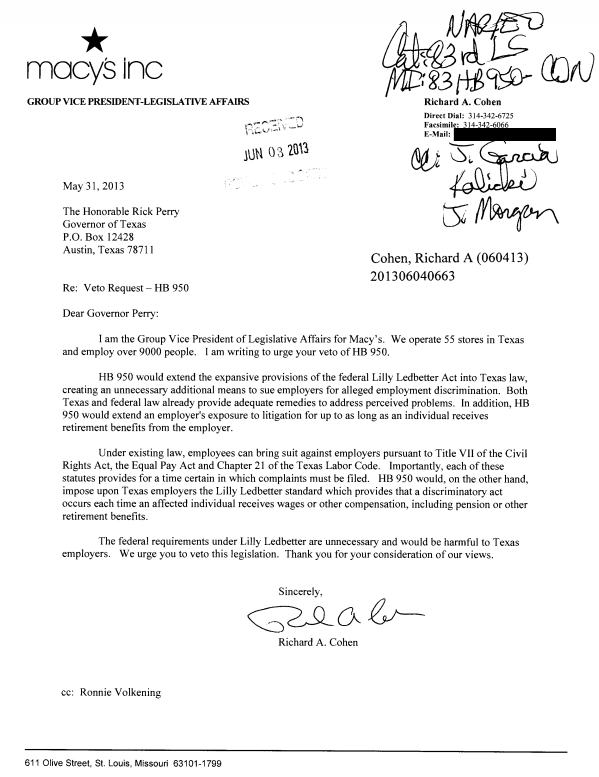