Independent Texans
stated on September 3, 2013 in a white paper on Proposition 6:
$6 billion water bond program voters passed in 2011 "has yet to be tapped."

Meeting Texas’ water demands will cost $231 billion by 2060, Texas’ water plan says. Much of that is maintenance and repair, but new water projects will cost $53 billion, and local governments report they’ll need state help to borrow half of that.

For that and other reasons, the PAC opposes the $2 billion water fund Proposition 6 that Texans will vote on Nov. 5, 2013, according to its white paper published online Sept. 3, 2013.

"Texas voters passed Prop 2 in 2011, with a narrow 1.5% margin," the PAC said. "At the time, voters were assured by Prop 2 supporters ...that the $6B evergreen bonding authority would build critical local water supply projects, create jobs and protect us from drought and wildfire without taxpayer contribution. Yet, the $6B bond program has yet to be tapped.

"The same supporters now say we must ‘act in concert’ with the Prop 2 bonding authority by infusing $2B of seed money to make the 2011 program work."

As it turns out, it’s correct that the state water board hasn’t started using the permission voters granted in 2011 to borrow $6 billion. But why -- and what does that mean for Prop 6?

The Texas Water Development Board, created in 1957 after a decade-long drought that ruined thousands of Texas farmers and ranchers, lends money at low rates to communities for local water and wastewater projects, such as reservoirs and pipelines. The board raises money to offer such loans by selling bonds -- basically, big IOU notes that the state eventually pays off.

State lawmakers and voters tell the board how many bonds it can sell. The last two rounds of authorization came in 2001, when voters gave permission for the board to issue $2 billion in bonds, and 2011, when voters approved an "evergreen" lending cap of $6 billion -- as long as the total amount loaned out never exceeds $6 billion, the board can keep lending without coming back for new authorizations.

But again, those are limits, not actual dollars. To date, the board has issued $1.6 billion under 2001’s $2 billion authority, spokeswoman Merry Klonower told us by phone. The board has committed to but not closed on another $173,000 in loans, so the board can set up $187,000 more in loans before it starts using the $6 billion lending cap, she said.

The board had predicted in 2011 that it would run out of the 2001 authority in one to two years, Klonower said, and chose not to wait until the Legislature’s next meeting in 2013 to ask for more. "You don’t want to get to the end of it and start turning communities away," she said.

An Aug. 30, 2011, fact sheet from the board said that of $3.29 billion in loans since 1957, $1 billion had been lent in the past three years. "The TWDB estimates that its existing bond authority will be exhausted within the next one to two years," and Prop 2 would provide needed authority beyond that, it said.

In other words, the board never expected to start using the $6 billion authority until about 2013, according to the agency. It was seeking permission to make those loans in the future.

Independent Texans’ white paper said the $6 billion authority had not been tapped because it doesn’t provide incentives including low interest rates and deferred payments.

The pace at which the board issued loans slowed after 2010, and lack of such incentives was one reason why, Klonower and House Natural Resources Committee director Elizabeth Fazio told us by phone and email. 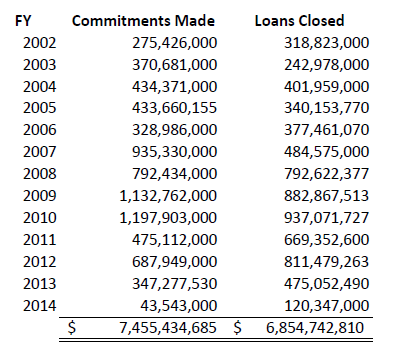 Fazio, who serves as the staff to legislators on the committee, explained by phone that the water board can’t make a loan unless two things happen.

First, a city or other local entity has to apply, and second, the state has to have a guarantee that the loan payments can be made even if the local government defaults (which none have in the board’s history). With general obligation bonds for water projects, Fazio said, the state provided this guarantee itself in 2007 and 2009 by designating enough general revenue cash to cover the payments.

Once that money is dedicated, the board can also use it to make the loan terms better for local governments. For example, the board can buy down the interest rate or offer to make the first loan payments for the local entity, until its water project is operational and has paying customers.

But general revenue to do that hasn’t matched up with the demand for loans, Fazio said. "Where there has been a dedication it has been very limited."

Klonower said that when the board was able to offer incentives, the demand for loans "far exceeded the amount of funds available." Incentives aren’t the only factor in communities’ decisions to take on water projects, though, she said; the economy and drought conditions weigh in, too.

Proposition 6 is intended to provide a stable source of money for such incentives -- namely, a $2 billion chunk of cash that would be transferred out of the state’s rainy day fund.

With that money, the board would provide its own guarantees and incentives instead of counting on general revenue being designated for those purposes, as the Legislature did in 2007 and 2009 but did not during the 2011 budget crunch.

If the proposal works as planned, state Rep. Allan Ritter, R-Nederland, who wrote the House legislation, has said it could fund a total of $27 billion in projects over coming decades, because the state could continue lending out money for projects as earlier loans are paid back.

Independent Texans said that the $6 billion bond program approved by voters in 2011 "has yet to be tapped."

That’s correct, but the water board didn’t expect to tap into it for a year or two. The pace of lending has slowed, partly because of the lack of incentives the group mentions, but the board is still making loans.

We rate this statement, which lacks these clarifications, as Mostly True.