Young Conservatives of Texas
stated on March 13, 2014 in a press release:
Ryan Sitton’s company "accepted over $650,000 in Obama stimulus dollars."

The Young Conservatives of Texas said Ryan Sitton, a candidate for the Republican nomination for a seat on the Texas Railroad Commission, once tapped economic stimulus aid ushered into place by the Democratic president, Barack Obama.

Those are fightin' words for GOP voters wary of Obama's fingerprints.

The group, which has endorsed the candidate facing off with Sitton in a May 27, 2014, primary runoff, former state Rep. Wayne Christian, said in a March 13, 2014, press release that Sitton’s company, "Pin(n)acleAIS, accepted over $650,000 in Obama stimulus dollars to expand their company."

This claim, which Sitton's campaign urged us to check, has been found faulty before. We divined why.

By email, Jenna White of Austin, executive director of YCT, told us a web post by the nonprofit journalism organization ProPublica and a business news story posted online were the basis of its claim.

The undated ProPublica post, headlined "How much stimulus funding is going to your county?," indicates that PinnacleAIS was awarded a Small Business Administration loan of $652,000 on Sept. 24, 2009. Sitton is president and CEO of Pasadena-based Pinnacle Asset Integrity Services, which describes itself as providing engineering consulting services and risk assessments. 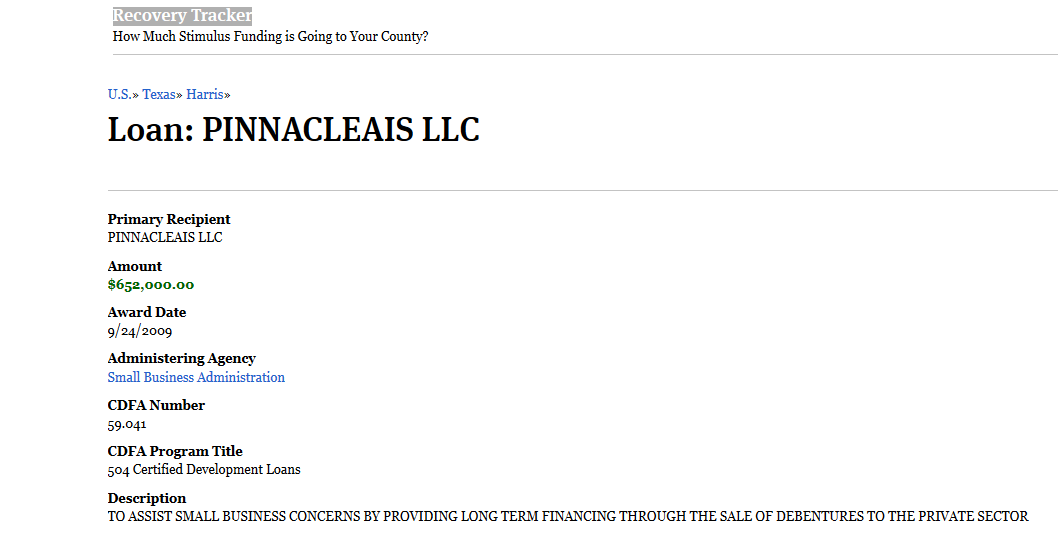 A story posted online Jan. 19, 2010, by GlobeSt.com, a commercial real estate news organization, described PinnacleAIS as on track to break ground on its headquarters building in Pasadena. Financing, the story said, had been delayed.

From the story: "Sitton says PinnacleAIS didn’t have difficulty obtaining the financing, as the company is in strong financial shape. ‘This will be the first debt the company has taken on,’ he adds. Rather, the company’s executives decided to take advantage of stimulus funds and obtain financing through a U.S. Small Business Administration (SBA) loan, due to the better loan rates and less initial capital requirement. Dealing with a government entity like the SBA can take time, Sitton explains, but the attractive terms made it worth it."

Specifically, Cory said, the Small Business Administration loan, which he described as totaling $621,000, never was closed, as in finalized. Instead, Cory said, PinnacleAIS obtained financing through JPMorgan Chase--a decision reached in 2011, about two years after construction began.

Cory said the company concluded the higher closing cost of the government loan made it less appealing than the bank-loan alternative.

Cory said that after we brought up the ProPublica web post, Pinnacle asked ProPublica to make a correction. To our query, a ProPublica spokeswoman, Minhee Cho, told us its stimulus funds' database hadn’t been updated since 2012. She added that it drew on the USASpending.gov website, where we found four entries indicating Pinnacle has sought SBA loans, though there was nothing about a loan of $650,000 or so.

This stimulus charge percolated in 2012 when Sitton sought a Texas House seat. According to a Feb. 13, 2014, Texas Tribune news story, Sitton said then that he sought but never took out an SBA loan, and while that agency got help under the stimulus package, so did many. According to the story, the federal database of stimulus awards "shows none went to Pinnacle." That also was the case when we checked the list April 24, 2014.

We circled back to White, who said by email the group would  amend its message. "We are changing the verbiage to ‘applied for federal stimulus dollars’ in a corrected press release to reflect the new information," White wrote.

Postscript: Craighead emailed us an April 24, 2014, letter from Laquita Cyprian, a Houston-based Chase vice president, stating PinnacleAIS obtained its funding for the building project entirely "through conventional loan products by JPMorgan Chase." Craighead also forwarded an April 25, 2014, email from Ryann Jones, a ProPublica data reporter, stating the organization had "confirmed that PinnacleAIS’s entry in our Recovery Tracker is indeed outdated and we will be removing the entry as soon as possible." Both messages originated after YCT made its claim, so we didn’t consider them in our analysis. In fairness, our fact checks must be derived from information already known or obtainable at the time a claim is made.

The company applied for a government loan identified by ProPublica and a business news publication as stimulus money. But the Sitton-led company says the money never flowed. We found no indications to the contrary and a federal website that tracks stimulus spending has no PinnacleAIS entry.

Website, "Where is the Money Going? The American Recovery and Reinvestment Act," a searchable database, Recovery.gov (accessed April 24, 2014)