A supporter of an Austin mayoral candidate declared that another candidate accepts corporate donations--which would be illegal, he did not add. 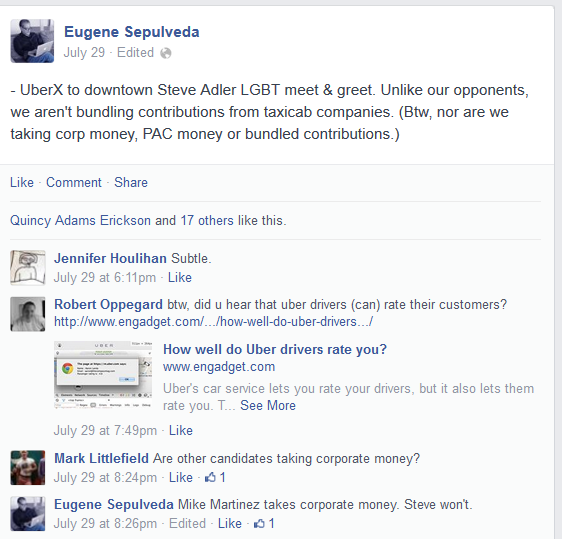 We wondered first if perhaps laws have changed dramatically so that Texas candidates may accept corporate donations.

Not so, we were reminded, in that Texas adopted its ban on corporate donations to candidates more than a century ago.

A September 2013 Texas Ethics Commission guide for candidates for local office specified that state law bars contributions to candidates for state and local office from labor unions and most corporations. More recently, Austin lawyer Tim Sorrells, the commission’s former general counsel, advised candidates for city office in an April 2, 2014, blog post: "In Texas, it is still a felony of the third degree for a corporation or labor organization to contribute directly to a candidate or a candidate committee."

We asked Sepulveda, a social entreprenuer and philanthropist, to elaborate on his Facebook statement. By email, he told us: "I should have said Mike was taking money from business entities. I was referring to his acceptance of contributions from LLCs as well as PACs and bundlers." LLCs are Limited Liability Companies.

"My bad for not being more specific," Sepulveda wrote. In another email, he said that when Velasquez asked him about the corporate claim, "I used the term corporate generically, even referring him to the documents filed with the city clerk. If I'd been trying to mislead anyone, I certainly wouldn't have pointed them to the candidate-filed reports."

Sepulveda, who said he made his Facebook comments as an Adler supporter and not as a spokesman for Adler’s campaign, elaborated that according to a campaign-finance filing, Martinez fielded contributions from 13 businesses, which we confirmed from Martinez’s July 15, 2014, campaign finance report, which showed the cited contributions ranging from $50 to $350.

We noticed the business contributors included several limited liability companies, which prompted us to ask an election-law expert, Trey Trainor of Austin, if such companies can legally give to candidates for local office. By phone, Trainor said LLCs may legally make donations so long as none of their members are corporations. Also by phone, Austin lawyer Ed Shack, who said he has helped Adler’s campaign, said the same.

Martinez campaign spokesman Nick Hudson told us the campaign earlier confirmed from state records and by contacting each contributor that none of the LLCs giving to Martinez’s effort had corporate members. Hudson agreed it would be illegal for Martinez to accept corporate donations.

Meanwhile, Sepulveda replied to us that he had since posted a comment on Facebook, below his original claim, stating he should have said Martinez accepted donations from business entities including LLCs rather than corporations. It appeared the afternoon of Aug. 4, 2014.

That’s not so. In fact, corporate donations remain forbidden and accepting such could lead to a felony charge. However, any candidate may field contributions from PACs and LLCs (so long as a donor LLC has no corporate members).

This advocate’s claim, which he clarified on Facebook six days later, shakes out as incorrect and ridiculous. Pants on Fire!