Occupy Democrats
stated on July 11, 2014 in a Facebook photo post:
Says Ted Cruz "was just bribed by the Kochs to introduce a bill that would give them and their allies America’s national forests, parks, and other public lands and open them for mining, drilling, fracking and logging."

So said a July 11, 2014, Facebook post by Occupy Democrats depicting the second-year Republican senator from Texas as the group’s "Sellout Politician of the Day."

Its message, brought to our attention by a reader, said: "This is Sen. Ted Cruz, a Koch puppet. He was just bribed by the Kochs to introduce a bill that would gift or sell them and their allies America’s national forests, parks, and other public lands and open them for mining, drilling, fracking and logging." 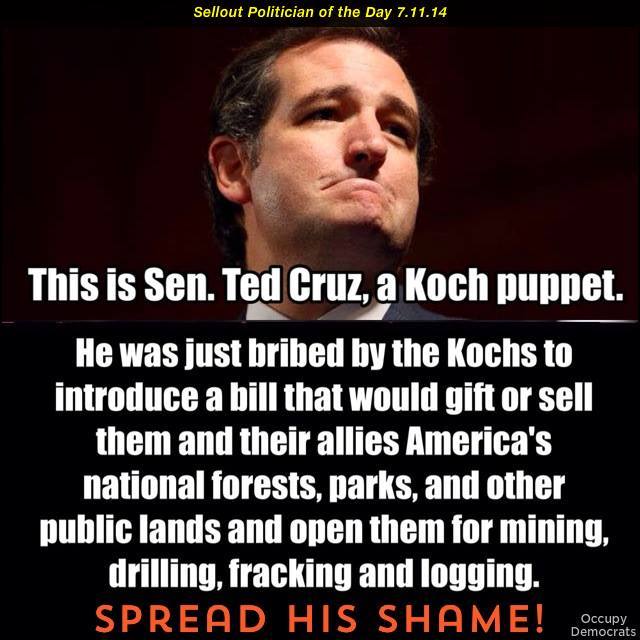 PolitiFact in April 2014 rated Mostly True a statement by Reid that the Koch brothers together are the richest people in the world. The same month, PunditFact rated Half True a claim the brothers spent three times what the top 10 labor unions expended in the 2012 elections. An apples-to-apples comparison was undoable, but an independent analysis of trackable federal data found organizations tied to the Kochs spent three and a half times what unions did that year. Earlier in April, PolitiFact rated False a claim by Charles Koch, CEO of the privately held Koch Industries, Inc., that it was only in the past decade he realized the need to "engage in the political process." Records showed him giving tens of thousands to candidates and political committees prior to 2004 while collectively, his brother and their company’s PAC had donated $7 million to candidates and political committees.

In Cruz’s Senate office, spokeswoman Catherine Frazier confirmed Cruz this summer offered a proposal, which wasn’t acted on, for the federal government to shed excess lands, but she said in an email the Occupy Democrats statement "looks like nothing more than politically charged rhetoric with no facts to back it up."

Occupy Democrats didn’t offer evidence of Cruz getting money or another benefit to introduce his proposal.

But Omar Rivero, the group’s founder and a 2014 Democratic nominee for the Florida House, said by email the Texan elected in 2012 had fielded campaign contributions from groups fueled by the Kochs, including the Club for Growth, which describes itself as the nation’s "leading free-enterprise advocacy group." The group has been Cruz’s top donor, giving more than $705,000 of his $18.1 million in contributions, according to the non-partisan Center for Responsive Government, which says Koch employees and the company’s PAC have contributed $25,750 to Cruz, placing Koch 26th among the senator’s most-generous givers.

Rivero told us Occupy Democrats analyzed Cruz’s amendment via a July 10, 2014, web post on the pro-Democratic ThinkProgress.org website stating Cruz sought to force the government to hand prized lands in the West to home states that would be forced to burden state taxpayers with the costs of managing the lands or, more likely, sell or give away the lands for mining, drilling and logging.

"We consider it bribery," Rivero said, "when a shadowy, wide-reaching corporate interest political machine like the Kochs’ bankrolls a U.S. senator’s political operation and then that same senator turns around and supports a major piece of legislation desired by those corporate interests."

We looked over the amendment, contacted a Koch spokesman and asked advocates familiar with Cruz’s proposal about this claim.

In July 2014, Cruz offered his amendment as a change to legislation authored by Sen. Kay Hagan, D-N.C., the Bipartisan Sportsmen’s Act of 2014; neither survived.

Cruz’s proposal said land under the exclusive jurisdiction of the federal Interior and Agriculture departments in any state shouldn’t exceed half the state’s land area. In states where those agencies do control more than half the land, Cruz proposed, the government should sell the "excess" land at auction or transfer it to the state. His amendment called for auctions or transfers to take place by 2020.

Frazier of Cruz’s office said he offered the amendment, as he had once before, because "he believes in principles of small government and like many conservatives, feels that federal ownership of land in the states should be limited so that the federal government does not own more than half of the land in any state." Asked the precise origin of the idea, Frazier said: "It came from him. He thinks the federal government should get out of the landlord business."

Like many companies, Koch Industries lobbies in Washington, according to summaries of federal records by the CRP, and it spent $5.4 million lobbying there from January through June 2014, just before Cruz offered his proposal.

Koch lobbyists reported interests in nearly 50 topics including appropriations to the Interior and Agriculture departments, according to the center, though the company did not report any lobbying related to Hagan’s proposal.

To our inquiry, Rob Tappan, a Washington, D.C.-based spokesman for Koch Public Sector, part of Koch Industries, said by email the Kochs had no position on Cruz’s amendment nor, he said, did it lobby the issue or contact Cruz’s office to discuss it.

Experts familiar with Cruz’s idea said they were unaware of information confirming the Occupy Democrats’ claim. Each also said it's not a novel idea to reduce the amount of federally owned land.

Broadly, Jessica Goad of the Colorado-based Center for Western Priorities, which says it "promotes responsible policies and practices, and ensures accountability at all levels to protect land, water, and communities in the American West," told us it’s not novel for legislators or members of Congress to advocate the sale or transfer of federal lands. Cruz’s amendment, she said by phone, "is in line with the anti-government, anti-establishment tone of that side of the (Republican) party."

Curiously, Goad said, Cruz’s proposal would limit the transfer or sale of "excess" lands to the states of Alaska, Idaho, Oregon, Nevada and Utah, the only states where more than half the land is federally controlled. She emailed us a Nov. 14, 2008, Heritage Foundation map of the U.S., drawing on federal data, showing the share of federally owned acreage by state. (Uncle Sam owns 2 percent of the land in Texas, the map indicates.) And how did the federal government end up with so much land in some of the states? Goad pointed out a center illustration showing that as a condition of joining the U.S., western states agreed to give up any stake in otherwise unclaimed lands in their respective boundaries. 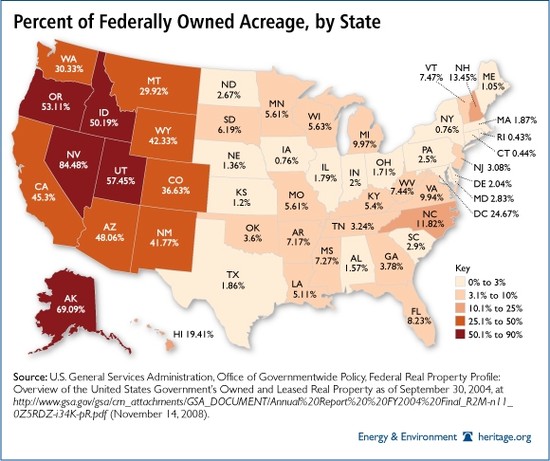 Goad said the concept of transferring or selling off federal lands has been promoted by right-leaning groups. By email, she pointed out a "model resolution" for state legislatures from the American Legislative Exchange Council, urging Congress to convey title of federal public lands to the states. An ALEC summary says: "Currently, huge swaths (over 50 percent) of the land in our nation’s western states are controlled by the federal government making it impossible for states to tax this land to fund education, grow state economies and generate high-paying jobs. Further, federal control prevents the states from accessing the abundant natural resources contained on these lands."

By phone, Alan Rowsome of the Wilderness Society, which describes itself as the "leading American conservation organization working to protect our nation’s shared wildlands," said he had no information on the Kochs touching off Cruz’s proposal, which Rowsome described as a "blunt instrument" to shift lands to states or auctions instead of leaving decisions to designated federal agencies. He said, too, there’s no certainty under Cruz’s amendment that the trims of federal lands would lead to drilling for oil and gas or to forests being cleared. "It is not a mandate of the legislation," he said.

Brian Mullis, a Cato Institute spokesman, put us in touch with Shawn Regan of the Montana-based Property & Environmental Research Center, a think tank which says its scholars have "documented how government regulation and bureaucracy often led to environmental degradation."

By email, Regan said Cruz’s proposal reflected "a sentiment in many western states that local control of public lands is more desirable than management by distant federal bureaucracies."

Of note, Regan said, three states affected by Cruz’s proposal -- Idaho, Nevada and Oregon -- are not oil-and-gas rich. He noted too that under the proposal, the secretaries of Agriculture and Interior would be responsible for identifying acreage to be auctioned off or transferred. Regan speculated: "These almost certainly would not be national parks, wilderness areas, or other ‘pristine’ federal lands, but would likely be lands managed by the Bureau of Land Management or Forest Service—many of which are already managed for logging, grazing, and energy development."

Occupy Democrats said Cruz "was just bribed by the Kochs to introduce a bill that would give them and their allies America’s national forests, parks, and other public lands and open them for mining, drilling, fracking and logging."

If excess federal lands were put up for auction, as possible under Cruz’s amendment, anyone including the Kochs could perhaps purchase the lands and then, as the owners, possibly chop down trees, drill for oil and the like.

All this said, this group failed to provide (nor did we find) evidence of a bribe or any Koch-linked inducement causing Cruz to present his proposal nor did we find confirmation his proposal came about so pristine federal lands could be exploited.