Juan Williams
stated on August 24, 2014 in comments on Fox News Sunday:
The No. 1 cause of death for African-American males 15-34 is murder.

Amid ongoing protests in Ferguson, Mo., the national conversation about racial justice and police force has ignored a critical point that needs to be discussed, said Fox News pundit Juan Williams

"I think there’s fear of intimidation, harassment being legitimized by the fact that there is a high rate of crime, especially among young black men," Williams said. "No. 1 cause of death, young black men 15 to 34 — murder. Who’s committing the murder? Not police. Other black men."

Last year, PolitiFact found that 93 percent of murder victims were killed by someone who shares their race. This time, we want to check out Williams’ claim that homicide is the No. 1 cause of death for black men 15-34 years old.

We looked at numbers from the Centers for Disease Control and Prevention, which lists the leading causes of death across all demographics.

Experts said that CDC data, compiled from coroner reports, are in line with FBI numbers, sourced from police reports. The CDC does not distinguish between the types of homicide (criminal, justified, etc.) or the types of accidents (auto accidents, falls, firearm discharge, etc.). The numbers for 2011, the most recent CDC findings, are consistent with data from previous years.

According to the CDC, homicide was indeed the No. 1 killer of black men between the ages of 15 and 34 in 2011. Accidents ranked second in causes of death, and suicide claimed the third amount of black male lives between 15 and 24 years old, while heart disease ranked third for men 24-34. 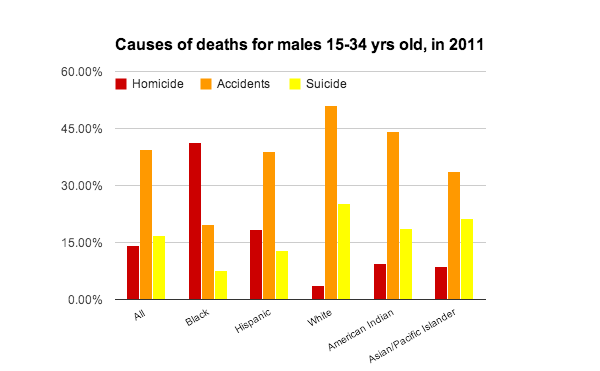 For men of all ages, homicide was ranked fifth in leading causes of deaths for blacks (4.6 percent), seventh for Hispanics (2.8 percent), and ninth for American Indians (2.3 percent). Homicide was not one of the top 15 causes of death for whites 15-34.

Why are so many young black males dying from homicide?

As the laws of aging go, younger men are less prone to fall victim to natural causes of death, so they are more likely to die of unnatural causes. And the racial disparity between those causes has partially to do with the likelihood of getting into car-related accidents, said James Fox, a professor of criminology at Northeastern University.

"Suburban whites drive more than urban blacks, and putting in more miles on highways —  that’s important because not a lot of people are going to get killed in fender benders in neighborhood streets," Fox said. "There are relatively few auto-accidents in black urban areas."

Beyond driving habits, the criminal homicide rate among young black males is significantly higher than other groups. This, experts agreed, has to do with poverty and geography.

The difference in social structures, access to jobs, educational opportunities, and many other factors between impoverished black neighborhoods and others is often a matter of life and death, according to Eli Silverman, professor emeritus at John Jay College of Criminal Justice.

"The (homicide) numbers highlight the condition in minority areas, where a lot of violence occurs and the whole way of life is further intensified because police surveillance is always trying to track down people," he said. "People have heightened survival instincts, will do anything to survive, and they’ll seek retribution for anything...because they don’t trust law enforcement."

Though it is tempting to pinpoint one cause as more impactful than others, Silverman cautions against singling out poverty or drugs or any other factor as the cause, because all of them intermix and interact.

Williams said that the No. 1 cause of death for black men 15-34 years old is murder.

CDC data supports the claim. Out of all causes of death, homicide claimed about 40 percent of black lives between 15 and 34 years. This was significantly higher than the national average for males of that age group, and all other racial groups.

Email interview with David McDowall, professor of criminal justice at the University at Albany, Aug. 24, 2014

PolitiFact, A look at statistics on black-on-black murders, July 14, 2013