Pete Gallego
stated on December 10, 2014 in his farewell U.S. House speech:
"This Congress made history as the least productive, most unpopular Congress in the history of this proud nation."

Calling for less partisanship, a Texan leaving the U.S. House lamented the bickering and pettiness around him. But one-term Democratic Rep. Pete Gallego of Alpine also made a grander claim, saying in his Dec. 10, 2014, floor speech: "This Congress made history as the least productive, most unpopular Congress in the history of this proud nation."

We failed to reach Gallego, who lost his 2014 re-election bid to Republican Will Hurd. But Anthony Gutierrez, who helped Gallego’s campaign, sent an email pointing out a May 2014 Vox web post showing the latest Congress was stacking up poorly in productivity and popularity compared to any Congress since the 1970s.

We’ve gotten into congressional productivity before, rating True a May 2014 claim by Rep. Joaquin Castro, D-San Antonio, that with only 67 bills or so passed into law, "2013 was the least productive year in congressional history since we’ve been keeping record."

But we take it that Gallego was referring to the full Congress, meaning his claim to history covered its two years in session.

And the 113th Congress, which passed 187 measures into law through November 2014, trailed the productivity of previous ones by a wide margin, according to the clerk’s tallies. The previous least-productive Congress was in session in 1995-96, ultimately advancing 280 measures into law, according to the clerk’s count. Next-worst was the Congress that gathered in 2011-12, which had 283 laws to its account.

Was the latest Congress, which adjourned days after Gallego spoke, the least popular in history?

From early 2013 through October 2014, according to results compiled at pollingreport.com, some 73 percent to 85 percent of respondents to more than 20 Fox News polls disapproved of Congress. Per the latest results when we looked, 80 percent disapproved "of the job Congress is doing," 13 percent approved, 7 percent were unsure. That poll of registered voters, conducted Oct. 25-27 by Anderson Robbins Research and Shaw & Company Research, had a margin of error of plus or minus three percentage points.

Those are pretty dismal figures (unless, say, you don’t have a stake in Congress being well liked and respected and so on). But they don’t prove the 113th Congress was the least popular ever.

We asked Brian W. Smith, a political scientist at St. Edward’s University, for perspective. By email, Smith cautioned there has only been careful regular polling on attitudes about Congress since the mid-1900s, meaning it’s impossible to say for certain the latest Congress is the least-popular ever.

The Gallup polling organization has inquired into attitudes toward Congress since 1974 and only started asking monthly in 2001. Smith noted the results show Congress never proving very popular, except after the 9/11 attacks, when there was a spike to 84 percent of respondents approving of the job Congress was doing.

Since 2001, Smith said, the Gallup poll indicates the latest Congress to be the least popular. 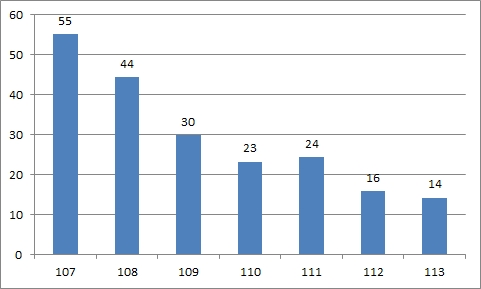 "It is fair to say that… this Congress will have the lowest approval since we began collecting data. This is true as an average, and the 113th Congress has the lowest single approval at 9 percent, which was in November 2013." Smith reminded, though, there is often a caveat. Though Americans tend to hate Congress in general, he wrote, voters tend to like their local representative, which "means that" even in "times of congressional disdain, incumbents do very well at the polls," Smith said.

By email, congressional scholar Norman Ornstein agreed polling on the popularity of Congress only goes back a few decades. That said, Ornstein replied, it seems clear "the last two congresses are at the very low end of the spectrum since we've been recording these things systematically."

Gallego said: "This Congress made history as the least productive, most unpopular Congress in the history of this proud nation."

This claim lacked caveats: There wasn’t polling on the popularity of Congress for most of its existence and productivity has only be yard-sticked since 1947. That said, it looks like the 113th Congress was the least productive Congress in nearly 70 years and the least popular one since relevant polls launched in the 1970s.

Click here for more on the six PolitiFact ratings and how we select facts to check.sources.

Truth-O-Meter article, "Congress propelled fewer bills into law in 2013 for lowest productivity since tallies started in 1947," PolitiFact Texas, May 9, 2014