The White House on Dec. 12, 2013, tweeted this picture of President Barack Obama holding a sign urging Americans to get health coverage “because nobody should go broke just because they get sick.”

Around midday Dec. 12, 2013, the official White House Twitter account posted a photo of Obama holding a sign urging Americans to get health coverage because "nobody should go broke just because they get sick." Social media denizens started creating versions that rewrote the sign’s text; Dewhurst’s had Obama saying, "I want more of Texans’ private data."

Some perspective: Texas in 2012 had approximately 19.5 million insured residents and 5.2 million legal residents without insurance according to a March 18, 2013, report by the state Health and Human Services Commission.

Does the Obamacare law demand private data on them that wasn't known to the government before?

PolitiFact reporters have checked out several claims about how the Affordable Care Act’s online marketplaces will handle personal information. Many of the concerns addressed are about how government agencies will share information they already collect -- and how secure that information will be.

As part of a May 2013 fact-check, PolitiFact in Washington, D.C., reported that a federal "data hub" resulting from the 2010 law would pull information from government agencies, but not expand federal data collection.

For example, the Social Security Administration is asked to verify a person's Social Security number, and the IRS confirms financial data to see if a person is eligible for a subsidy.

PolitiFact in D.C. gave a False rating Sept. 19, 2013, to a claim by former New York Lt. Gov. Betsy McCaughey that "Obamacare will question your sex life," finding that nothing in the health care law required such questions.

So what information does the government collect under the Obamacare law?

If you apply to shop in the federal online insurance marketplace or the marketplace for your state, you’ll supply information on yourself and perhaps family members, some of which the government already has.

Healthcare.gov offers a checklist for people preparing to fill out applications, whether online or printed: Social Security number, employer, income, current insurance policy numbers and information about your employer’s insurance plans (if any). 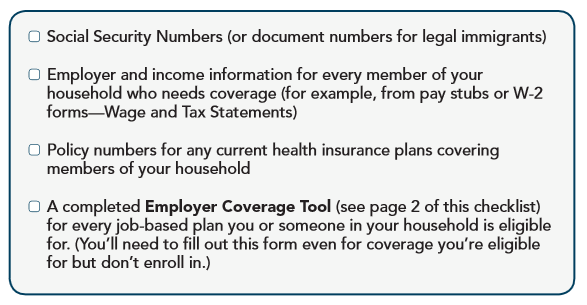 Such answers will help determine whether you’re eligible to buy insurance through the marketplaces and if you can get free- or reduced-cost coverage via tax credits, Medicaid or the Children's Health Insurance Program.

The standardized family application asks for information on you and everyone who lives with you, including whether you are pregnant and how many babies you’re expecting, whether you have a health condition that limits daily activities, whether you live in a nursing home and whether you were in foster care after age 18.

Other questions concern employment, military service, sources of income, tax deductions taken and whether you are American Indian or Alaska Native.

A Sept. 18, 2013, fact sheet from the federal Centers for Medicare and Medicaid Services said, "Personal health information (PHI) will be requested only when it is needed to complete the application and make an eligibility determination for health coverage options."

Health privacy expert Deven McGraw told us by email that the applications do collect some information the government did not already have, but said it’s the same type of information gathered when people apply for public coverage such as Medicaid.

"They are questions that are specifically designed to match eligibility criteria. So none of it is extraneous," said McGraw, director of the health privacy project at the Center for Democracy and Technology, which advocates for Internet freedom. And, she said, the data can’t be used for any purposes other than the marketplaces’ functions.

Facebook posts
stated on February 20, 2020 in an image
“Bernie Sanders wants free health care for all and was asked how he would pay for it. His answer was raise taxes to 52% on anybody making over $29,000 per year.”

According to the National Immigration Law Center’s website, applicants who are not U.S. citizens will have their status verified through a Homeland/U.S. Citizenship and Immigration Service database. Agencies already use the web service, called Systematic Alien Verification for Entitlements (SAVE), to determine immigrants’ eligibility for benefits including Medicaid, housing loans and unemployment.

So the application process puts together some information the government already had with some it didn’t have.

People who aren’t applying to shop in the marketplaces but are subject to the Obamacare law’s mandate will also be sharing some new information with Uncle Sam.

The mandate to have or get insurance applies, according to the immigration law center, to all U.S. citizens, naturalized citizens and legal immigrants.

Via email, IRS spokeswoman Lea Crusberg said 2014 tax returns will ask whether you have health coverage that meets the new standards or an exemption, whether you got coverage through an Obamacare marketplace and whether you got a tax credit to help defray the cost. The law’s new tax payments and credits will also be on returns, of course.

In 2015, Crusberg said, the IRS will start collecting coverage information from insurance providers. Employers who insure their own workers in-house will report which employees are enrolled and give enough information so the IRS can tell if those workers are due a tax credit. Self-insuring employers will also put the cost of the plan they’re providing on W-2 forms so workers can see it.

Is the new data "private" information?

Per the CMS fact sheet, Obamacare applicants could be asked to cough up some personal health information. But the fact sheet also says the marketplaces’ systems "will not store this information" -- which casts some doubt on whether the government is really "collecting" it, but serves as an indication that it’s considered sensitive.

How about when the IRS asks where your insurance comes from, whether you got a tax credit for it and whether it meets the Obamacare law’s standards?

Generally, the IRS regards what you put on your tax return as private. For example, tax preparers who disclose such information without your consent can face criminal charges.

Final IRS regulations governing who can disclose what tax return information to HHS under the Obamacare law were issued Aug. 13, 2013. An FAQ posted by the IRS that day said that "officers and employees of the IRS will disclose to HHS, the Marketplace, and state agencies only, upon written request and subject to strict privacy and security rules, certain return information ... for the purpose of determining eligibility for certain health care affordability programs."

The subset of Texans shopping for coverage through the online marketplace are providing additional private data for a reason: to ensure they’re qualified. Dewhurst's statement overlooks these aspects.

Regardless, many more Texans will be asked to give the IRS information about their health coverage that was previously not requested.