Barack Obama
stated on July 17, 2014 in a speech in Delaware:
"We've recovered (from the recession) faster and come farther than almost any other advanced country on Earth."

In a speech in Wilmington, Del., last week, Obama offered several pieces of evidence that, in his view, suggests that the country is rebounding from the recession. Unemployment is at its lowest rate since 2008, he noted; the auto industry is "booming," America is making more oil than it imports, and the deficit has been cut in half, he added.

All told, Obama said, "we’ve recovered faster and come farther than almost any other advanced country on Earth."

That final claim got our attention, so we took a closer look.

We asked the White House for evidence to back up Obama’s claim, and they pointed us to their annual economic report to Congress.

According to the report, the United States is "one of only two of the 12 countries that experienced systemic financial crises in 2007 and 2008 but have seen real (gross domestic product) per working-age person return to pre-crisis levels." The 12 countries are France, Germany, Greece, Iceland, Ireland, Italy, Netherlands, Portugal, Spain, Ukraine, United Kingdom and United States.

Germany is the only other country of these 12 in that category -- that is, that has seen its GDP per person age 16 to 64 return to its pre-recession level. Here’s the summary chart from the White House report: 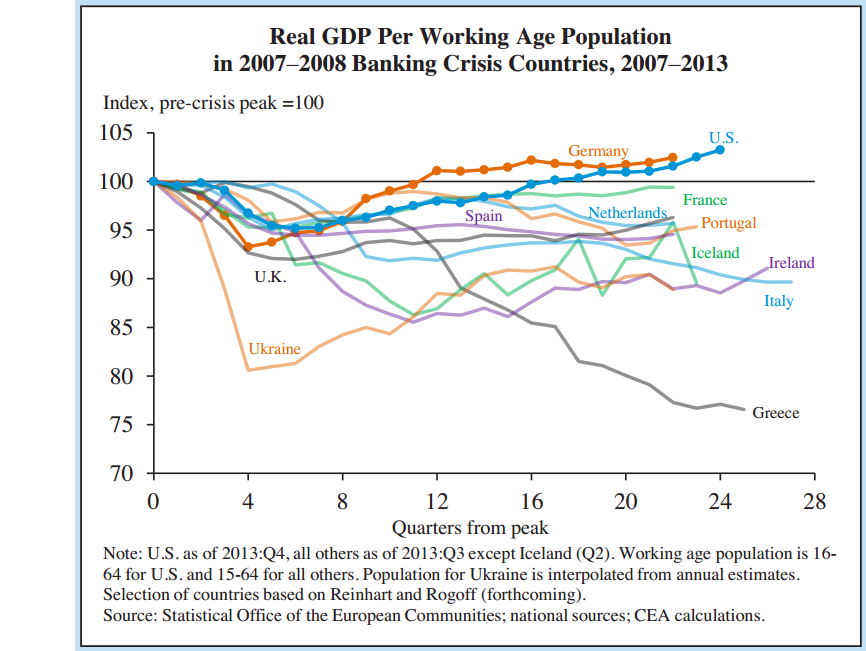 This provides evidence for Obama’s claim, because, aside from Germany, all the other countries in this category haven’t yet returned to their pre-recession level at all.

So, case closed? Not quite.

There are many ways to measure the economy beyond real GDP per working age. And while the 12 countries studied in the report all experienced bank crises during the recession, Obama’s statement was broader than that -- he said "almost any other advanced country on Earth." (The list of the most "advanced countries on Earth" also usually doesn’t include Ukraine.)

So we ran this measurement past some experts.

In general, they agreed with the tenor of Obama’s claim, but said it wasn’t as simple as relying on the chart the White House provided.

"The general sentiment is quite right," said Jeffrey Frankel, an economist at Harvard University. "But to evaluate the statement in its sweeping form, one would have to look at more countries, and one should look at other possible measures of economic performance."

On the experts’ recommendations, we looked at inflation-adjusted gross domestic product, as well as unemployment rates, in a wider selection of advanced countries. We used data from the International Monetary Fund, which considers 36 economies to be "advanced."

For each of these 36 countries, we calculated the growth between their worst point in GDP and unemployment to 2013, the last year for which full data is available. Positive growth in GDP is good, while negative growth in unemployment is desirable. Each value that is better than the United States’ (the last country on the list) is highlighted in bold-italic. (The raw data is here.)

So the United States has clearly done better in expanding GDP and lowering unemployment than most of the economies deemed "advanced" by the IMF. Still, some countries have fared better, particularly in Asia. It is also worth nothing that some countries, like Estonia, have seen an improvement in GDP, yet their GDP has not yet returned to pre-recession levels.

Among the countries beyond the United States that are doing well are Canada, Germany and Switzerland. Israel and some Asian countries, such as Korea and Singapore, have seen improvements as good or better than the United States' in recent years, but they were not as dramatically affected by the recession as North America and Europe.

Overall, the report suggests that the United States’ forecast for economic growth is better than it is for many advanced European economies, with others roughly comparable. In general, the United States is expected to have the highest growth in the coming year -- a projected 2.75 percent.

In fact, the report found that the United States economy accelerated faster than anticipated in 2013, while many advanced economies in Europe are still struggling with high unemployment, debt and other financial issues. Canada, too, has seen some growth, but sluggish exports and business investments have kept the growth fairly slow.

"The strengthening of the recovery from the Great Recession in the advanced economies is a welcome development," the report says. "But growth is not evenly robust across the globe."

In many advanced Asian economies, for instance, the recovery is steady due in large part to growing exports, domestic demand and strong labor markets. (Japan, which is undergoing structural reforms, is an exception.) Australia and New Zealand -- neither of which was included in the report the White House cited -- have growth classified as "stable."

Laurence Ball, an economist at Johns Hopkins University, said another factor to consider is the long-term damage caused by the recession. Ball looked at 23 countries that belong to the Organization for Economic Cooperation and Development and compared how much they thought they could grow in 2007 to how much they think they can grow now, based on OECD estimates.

For the United States, the figure is 5.3 percent -- lower than the rate for most advanced countries, but higher than Australia, Switzerland and Germany. This shows that even though the United States has recovered well compared to other countries, it has still lost potential output as a result of the recession, Ball said.

Obama said the United States has "recovered faster and come farther than almost any other advanced country on Earth" since the end of the Great Recession.

The White House’s supporting data is pretty narrow, but other measurements show that the United States has generally fared better since the recession than many -- though not all -- of its peers among the world’s advanced economies. On balance, we rate this statement Mostly True.

Johns Hopkins University, "Long-term damage from the Great Recession in OECD countries," May 2014

Email interview with Austan Goolsbee,  former chairman of the Council of Economic Advisers and economics professor at the University of Chicago, July 22, 2014