Nancy Pelosi
stated on June 17, 2014 in a tweet:
Says 11 soccer players on the U.S. Men’s National Team are immigrants.

The United States is officially overcome with World Cup fever, and its inhabitants are showing support for the red, white and blue in many ways. Of course, for congressmen and women it means backing America with their thumbs by tweeting pro-U.S.A. rally cries to their followers and constituents.

While the quadrennial event has generally united Democrats and Republicans, not all the social media cheering was free of politics. After the United States’ thrilling 2-1 victory on June 16, 2014, over Ghana, House Minority Leader Nancy Pelosi made an immigration reform push by invoking the U.S. Men’s National Team.

She tweeted: "Immigrants help drive America's success, even in the World Cup! Look at what #USMNT would be without them. #TimeIsNow." By Thursday evening, it had been retweeted and favorited almost 1,000 times.

The below picture was included: 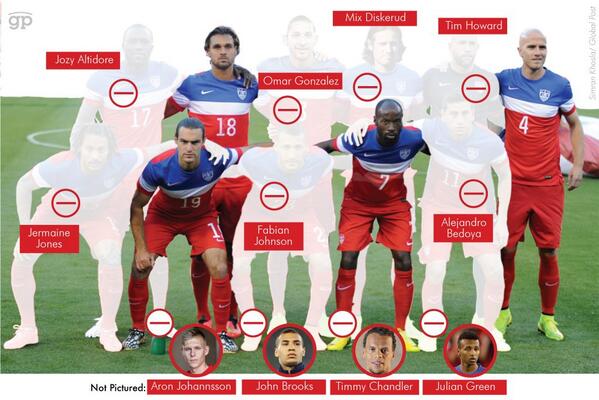 As you can see, the graphic shows 11 U.S. players with minuses next to their pictures and names. Pelosi’s tweet reads that those 11 players are immigrants who would likely not be on the roster if they weren’t allowed in the country.

Much has been made about the number of United States players who have dual citizenships, but is the U.S. World Cup team powered by immigrants?

We went through the roster and researched the backgrounds of the 11 players highlighted in the graphic.

Six of the players were actually born in America. So even though they may have parents who are from other countries, they are very much considered citizens, not immigrants.

Julian Green: Born in Tampa, Fla., to an American serviceman father and a German mother; moved to Germany with his mother as a young child.

Tim Howard: Born in New Brunswick, N.J., to an African-American father and his Hungarian mother.

Aron Johannsson: Born in Mobile, Ala., to Icelandic parents.

The other five were not born in the United States but have at least one parent who is an American. (In four of the cases, their fathers were in the United States military serving abroad.) That entitles them to all to U.S. citizenship, meaning they did not have to go through the immigration process noncitizens do.

John Brooks: Born in Berlin, Germany, to an American serviceman father and a German mother.

Timmy Chandler: Born in Frankfurt, Germany, to an American serviceman father and a German mother.

Mix Diskerud: Born in Oslo, Norway, to a Norwegian father and an American mother.

Fabian Johnson: Born in Munich, Germany, to an American serviceman father a German-born mother who had an American father.

So not only are none of these 11 individuals considered immigrants by the United States, they're all actually natural born citizens.

Pelosi’s office told us the source of the graphic is a story posted on Business Insider from Global Post.

The story noted that a number of far-right nationalist parties with anti-foreigner sentiments seem to be on the rise in Europe. Some countries are also considering anti-immigration legislation that would put stricter quotas on new inhabitants.

Therefore, the author wanted to imagine what these teams would look like without immigrants. To do this, he singled out players with at least one foreign-born parent. As Vox’s Dara Lind points out, "That might make sense for other countries, where parentage is more important to citizenship. But it doesn't make any sense for the U.S., where nearly everyone has some sort of immigrant heritage, and where everyone born on U.S. soil is a citizen from birth." Basically, in some countries, it doesn’t matter if you were born there; citizenship is more closely tied to lineage. That’s not the case in America, one of a small number of countries that grants citizenship at birth.

We took all of this to Pelosi’s office. Spokesman Drew Hammill said they weren’t claiming these players were immigrants, rather, "We’re merely echoing the point made by the creators of the graphic about the contributions of these sons of immigrants."

But not even all of the foreign-born parents are actually immigrants. Timmy Chandler, for example, stayed in Germany with his German mother after he was born.

So by no definition is the United States represented by immigrants at the World Cup in Brazil. That’s not to say immigrants or immigration aren’t important to the makeup and heritage of the team. The United States is a country built on immigrants, and every player on the team can trace back at least half their lineage to another country (there is one half Native American on the team, forward Chris Wondolowski).

But that’s not the message Pelosi was trying to give with her tweet. If it was, you could have whited out the entire team.

In a tweet pushing immigration reform, Pelosi posted a picture of the U.S. Men’s National Team missing 11 of its players and tweeted "Immigrants help drive America's success, even in the World Cup! Look at what #USMNT would be without them." In this instance "them" means immigrants. But none of those 11 players are immigrants. Some aren’t even the children of immigrants.