In a March 10, 2014, tweet, the Democratic gubernatorial nominee pointed out that her Republican opponent, Attorney General Greg Abbott, passed up a chance to say whether he would have vetoed a Davis-sponsored measure related to ensuring equal pay for Texas women that didn’t make it into law.

Davis, a Fort Worth state senator, wrote: "While @GregAbbott_TX dodges questions on the Texas Equal Pay Act, women are still paid 82 cents for every dollar a man earns in Texas."

We’ll leave it to Abbott and Davis to debate the 2013 measure vetoed by Gov. Rick Perry. But we wondered: Are Texas women still paid 82 cents for every dollar earned by a man?

We found that pay gaps persist, though comparisons can be dicey.

In August 2013, we rated as Mostly False a related Davis claim: "Texas women make an average of $8,355 less per year than men doing the very same job."

That’s not necessarily correct for individuals doing the same job. In 2010, $8,355 was the general gap between median salaries of full-time working Texas men and women, according to federal estimates, and the 2012 gap was nearly $500 less than that. Significantly, the research cited by Davis did not drill down to salaries for men and women doing the same jobs. In contrast, 2013 survey results indicated a $2,000 gap between the median pay for Texas men and women with comparable professional experiences holding the same or similar jobs.

Responding to our request for back-up information, Davis spokeswoman Rebecca Acuña pointed us to an April 2013 "fact sheet" from the National Partnership for Women & Families, an advocacy group for workplace fairness and other issues.

That statement is footnoted to the one-year American Community Survey undertaken in 2011 by the U.S Census Bureau and a bureau chart indicating median earnings in the past 12 months by sex by work experience for residents 16 and older. These aligned with the partnership’s fact sheet.

Kliner pointed out, too, that comparable results based on the 2012 ACS were posted online by the bureau in September 2013. The 2012 estimates indicate that median earnings for Texas men who worked full time year-round in the past 12 months were $44,802; for Texas women meeting these criteria, median earnings were $35,453 — or 79 cents for every dollar earned by men who worked full time.

Separately, we downloaded a bureau chart showing slightly different estimated median earnings for full-time male and female civilian workers in Texas based on the bureau’s 2012 survey. The resulting chart indicated a median wage for full-time working men of--$45,166 for men, $35,518 for women. By this metric, we calculated, civilian full-time female workers in Texas earned an estimated 79 cents for each dollar earned by full-time male workers. In 2011, a bureau chart suggests, the comparable figure was 81 cents.

Kliner told us the partnership relies on bureau estimates not limited to civilian workers because it believes that delivers a more complete view of the workforce. "It is also the chart that has been used historically, so it allows for comparisons over time," she wrote.

Upshot: The latest available estimate is that Texas women working full time earned 79 cents for every dollar earned by such men in 2012. That was a penny better than in one of the previous six years, the same or a penny less than the result in four of the years and three cents less than the 82 cents estimated for 2011 and relied upon by Davis.

Experts we queried agreed with our math while offering caveats.

By email, Lloyd Potter, the state demographer, pointed out that any focus on earnings for full-time workers leaves out part-time workers. Women, he wrote, are more likely to be employed part-time. Still, Potter said, "if we just looked at part-time workers, again, you’d probably find women earn less."

In our 2013 fact check, we noted there’s a range of how many hours full-time workers log, and men are more likely than women to be on the job for 41 hours or more per week, according to the Bureau of Labor Statistics. Because more men work overtime, that should translate into higher earnings for them -- because they are paid more, or because their longer hours lead to more job success -- and contribute to the wage gap. Though more nuanced analysis shows that job differences explain much of the pay gap, experts agree that much of it still cannot be accounted for. That’s where sexism comes in, some say.

Austin economist Stuart Greenfield similarly said by email: "In the aggregate, Sen. Davis’ statement is absolutely, positively correct," though he said that "when one controls for work experience, education, and other factors, the earnings’ differential is reduced."

Greenfield also pointed out a Dec. 2, 2013, Bureau of Labor Statistics press release summarizing median-pay changes among full-time workers over the years: "In Texas, the ratio of women’s to men’s earnings trended upward from 1997 to 2004. It then fluctuated from 2005 to 2009 before climbing to a series high of 85.6 percent in 2010. However, in the last two years the Texas women’s to men’s earnings ratio has declined 6.0 percentage points to its lowest level since 2001."

According to the 2012 survey results, Texas women fared better compared to men in their state than women in 24 states. Arizona placed first; women working full time earned 87 cents for every dollar earned by men.(For more than a decade, the graph indicates, Texas women fared better than their male counterparts in the state compared to women versus men in the nation as a whole, though conditions dipped in Texas compared to the nation in 2011 and 2012. We asked Cheryl Abbot, a regional economist for the Bureau of Labor Statistics, to speak to why this was so. See her reply here.) 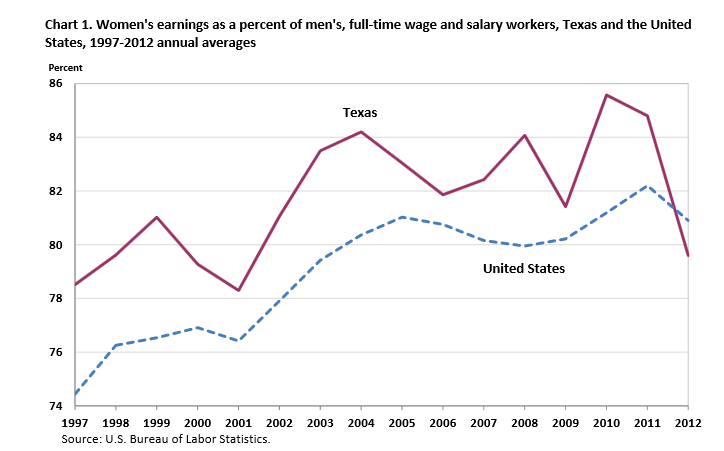 Jennifer Lee, a researcher for the left-leaning Center for Public Policy Priorities, which focuses on programs serving low-income Texans, said of the 79-cent pay difference estimate suggested by the 2012 survey: "This is how the ‘wage gap’ is usually calculated. If you expand who you’re looking at to include all employed individuals (whether or not they work full-time or year-round), women earn 71 cents for every dollar that a man earns," Lee said by email.

Lee reminded us of a February 2007 paper by Cornell University labor economists Francine Blau and Lawrence Kahn, "The Gender Pay Gap: Have Women Gone Far Enough?" The paper states that 53 percent of the gender wage gap stems from variation in job, industry and union status between the genders.

According to the paper, major reasons for such wage gaps include:

Occupational and industry category (49% of the reason) – Lee said that many women are concentrated in particular occupations. Occupations that are heavily female, such as health care support or personal care and service occupations, tend to pay low wages, she said. For example, home health aides in Texas, who are largely female, earn on average $17,430 per year, Lee said, while women also represent 63% of workers earning minimum-wage or less in Texas. When you break down earnings data by occupation, she said, this gap persists in almost all occupations.

Labor Force Experience (10.5%) – A portion of the gap is explained by factors related to work experience, such as interruptions in work for child care, Lee said.

Unexplained (41%) – Lee said a large portion of the gap is unexplained by women’s choices. This could be because of conscious or unconscious biases (research shows this is particularly acute against mothers), Lee wrote, while other research shows that different attitudes around wage negotiations may contribute to the gender wage gap.

Lee added: "A lot of people see occupational choices and time off from work as women’s choices. And while this is true, I think it’s important to realize that the choices we make are heavily influenced by the environment in which we make choices, the choices that are available, and how those choices are presented. So while it’s true that more women work in low-wage jobs, there may be reasons why women don’t choose to work in some higher-wage occupations. Similarly, mothers may choose to take time off work to care for young children, but perhaps they wouldn’t if child care were more available or affordable."

Davis said that Texas women are still paid 82 cents for every dollar a man earns in the state.

Her figure, based on a 2011 federal survey, reflects median earnings for adults who worked full time in the past 12 months, leaving out part-time workers. It’s also outdated in that according to the latest available survey, taken in 2012, Texas women earned 79 cents for every dollar earned by men (again working full time in the past 12 months), less than what Davis said.

We rate this claim as Mostly True.