Wendy Davis
stated on April 22, 2014 in an online post:
"Under Greg Abbott, Texas four-year-olds would be forced to undergo standardized tests."

An illustration posted online by Davis, the Democratic gubernatorial nominee, starts by stating Texas pupils currently take the State of Texas Assessments of Academic Readiness, or STAAR. Davis then says that under Abbott, the Republican candidate for governor, "Texas four-year-olds would be forced to undergo standardized tests as well." 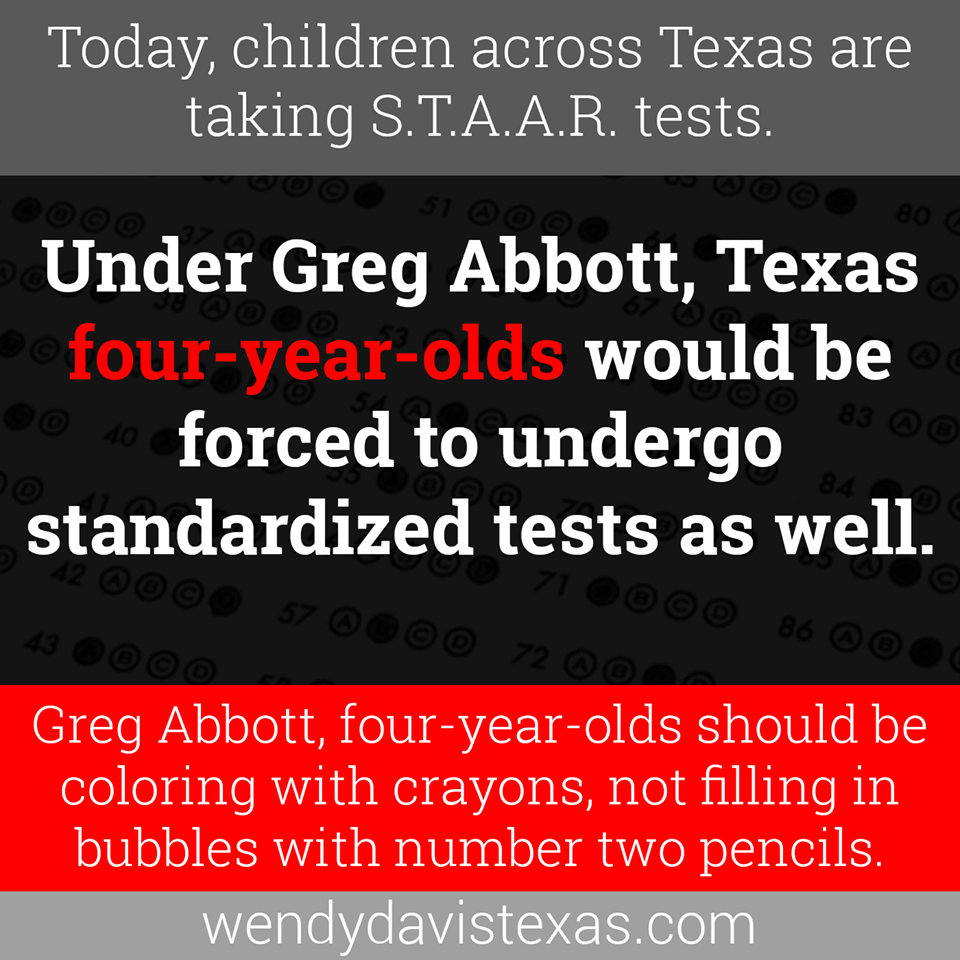 A reader emailed us, asking: "What’s the truth to that?"

Davis, a Fort Worth state senator, and Abbott, the state’s attorney general, have clashed over their competing proposals for pre-kindergarten education at a time that some communities, including San Antonio, have moved to expand pre-K.

Not all children attend public pre-kindergarten, but Texas school districts have been required to offer pre-K to certain students since 1985, according to the National Institute for Early Education Research. Factors affecting eligibility include qualifying for a free- or reduced-price lunch, homelessness or the inability to speak or comprehend English.

Davis supports a broad expansion of full-day pre-K to all youngsters, costing the state about $750 million a year. In contrast, Abbott proposes spending an additional $1,500 per student in school districts that agree to implement a "gold standard" program consisting of a rigorous curriculum and staff requirements plus assessments to measure effectiveness of the pre-K programs.

Those assessments are what led to the Davis’ campaign’s charge that Abbott wants to test 4-year-olds. For instance, Davis said April 15, 2014, that "assessments" in Abbott's plan is code for testing, according to a Dallas Morning News account posted online that day.

There are at least three methods of assessing students at the prekindergarten level:

● Direct Assessments, norm-referenced standardized tests: A typical question on a direct assessment might ask the child to identify the letter and provide three options. The child receives credit for correctly identifying the letter. Direct assessments are in some views deficient because they do not capture the full spectrum of the students skill set and cannot truly be used to determine quality of the program.

● Observation Checklists and Scales: Assessment under this method requires that teachers informally watch students within the daily routine and observe their mastery.  This option does provide a more complete capture of the student’s progress but is contingent on teachers being well-trained in the method. Such assessments are also labor intensive.

● Child’s Work (Portfolio): Assessing children’s work acts as a complement to a teacher’s observed progress. This method does not capture the entire picture of a student’s progress and tends to be labor intensive for teachers.

Abbott’s proposal says next: "Most states employ one or both of the first two assessment methods. Texas is one of only four states not to require any assessment." Also, the proposal says that in order to preserve local control and give schools flexibility, the "state should avoid granting any one testing organization a monopoly over prekindergarten evaluations. Instead," Abbott proposes, the state education agency "should publish a list of approved assessments that districts may use. Districts will report the results to the agency."

A footnote leads to a 2012 report by the New Jersey-based Educational Testing Service identifying the other states that don’t assess the quality of pre-k classes as Maryland, Tennessee and Wisconsin.

The ETS report also says that each of the three assessment methods has tradeoffs while it separately warns against counting on standardized tests to gauge a preschooler.

"Older students typically are tested through the use of norm- or criterion-referenced assessments," the report says. "Students are expected to independently read and respond to assessment items by filling in a bubble or circling or checking an answer (known as a selected response), or writing an essay or performing mathematical calculations…

"These traditional approaches," the report continues, "are unlikely to produce useful data about what a 4-year-old knows or can do, and, in turn, how effective the pre-K program is in improving children’s development and/or kindergarten readiness." It’s unrealistic to expect such children to read independently and respond to traditional test queries, the report says, in part because you can’t count on them to remember test directions. Also, the report says, such children develop at different rates and, naturally, are adjusting to school coming from distinct home lives.

A chart in the report indicates that Alabama, Alaska, Nevada and Virginia rely solely on "direct assessment" of preschool students with 19 states mixing preschooler assessment methods.

Petkanas, asked about Abbott’s plan not saying standardized tests would be required of 4-year-olds, said the plan "mandates assessments and ties funding to their outcomes -- and then points to norm referenced standardized tests as the first way to do that."

We asked Abbott’s campaign about this. Spokesman Matt Hirsch stressed by email that Abbott’s plan gives districts with state-supported pre-k classes the flexibility to choose an assessment method.

Not quite. Abbott wants assessments of the subset of Texas students who are enrolled in public pre-k at the start and end of each school year and he says a way of doing so would entail standardized tests. However, his proposal also lists alternate assessment methods and says districts who volunteer for his pre-k program should be left to pick an assessment approach from various options fashioned by the state.

CLARIFICATION, 12:20 p.m., May 2, 2014: This story was amended to clarify that Abbott proposes assessments of pre-k students in all districts with state-supported pre-k programs. The rating did not change.