Jeb Bush
stated on August 10, 2015 in a Twitter exchange:
There has been a 100 percent "increase in student debt under this Democratic White House."

On Aug. 10, as part of promoting her college affordability plan, Clinton tweeted a graphic that said "$1.2 trillion, the amount 40 million Americans owe in student debt," accompanied by the text, "Cost won't be a barrier to an education. Debt won't hold you back."

Bush, running for the Republican nomination, responded with his own similar graphic that said, "100 percent, the increase in student debt under this Democratic White House. Hillary Clinton: mortgaging the future of college grads for four more years."

Has the student debt really doubled in the past seven years, and is it fair to tie it to Barack Obama’s presidency? (We also fact-checked Clinton’s response -- a third graphic that said Florida received an "F" in college affordability under Bush. See that article here.)

The numbers, for the most part check out. But experts told us that rising student loan debt is a trend that started long before the Obama administration.

"The long term trend of colleges becoming unaffordable goes back to the mid-1980s -- when private colleges started jacking up the prices," said Stephen Burd, a senior policy analyst at the New America Foundation and an expert in higher education policy. "In more recent years, it's been the publics that have seen bigger percentage increases in tuition."

This graph from the National Center for Education Statistics shows the total student loan debt from 2003 through 2012, adjusted for inflation: 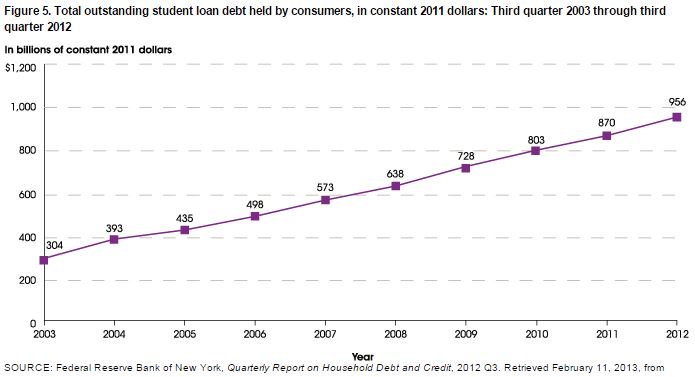 Elizabeth Warren
stated on August 28, 2022 in an interview on CNN
"40% of the folks who have student loans do not have a college diploma, four-year diploma. These are people who are truck drivers and who are nail technicians and nurses’ aides.”

Experts told us that total student debt increases when tuition increases and when more students enroll, and the 2008 recession caused both of these things to happen -- so the recent increase is more a function of the economic downturn, rather than having a Democrat in the White House.

As opposed to Obama, "some critics say governors and state legislators are to blame since they didn't protect higher education funding -- and colleges, since they haven't controlled costs," said Joni Finney, director of the Institute for Research on Higher Education at the University of Pennsylvania.

Even with the increased tuition, more people enrolled in college, as people tend to do when employment prospects appear to dry up, Heller said. Additionally, the recession left households with fewer of their own resources to fund higher education, so they had to take out more loans.

There haven’t been any big policy changes so far in the Obama administration that would have affected student loan debt significantly, either positively or negatively, said Beth Akers, a Brookings Institution fellow and an expert on the economics of higher education.

"It is far reaching to suggest that the president has had a significant impact on student borrowing during his administration," Akers said.

The White House pointed out that the Obama administration has taken other measures to improve college affordability, such as expanding federal scholarships and implementing programs to help borrowers pay back student loans.

Bush said there has been a 100 percent "increase in student debt under this Democratic White House."

There has been a substantial increase in student loan debt over the course of Obama’s presidency -- but it’s an increase of about 86 percent, not 100 percent. Experts also told us that student loan debt was growing before Obama took office, too, and much of the increase that happened under his watch was a result of the recession and other factors out of the White House’s control. We rate Bush’s claim Half True.

National Center on Education Statistics, "Financing Postsecondary Education in the United States," May 2013

Email interview, Joni Finney, director of the Institute for Research on Higher Education at the University of Pennsylvania, Aug. 12, 2015