Donald Trump
stated on August 16, 2015 in a policy plan on immigration.:
"The annual cost of free tax credits alone paid to illegal immigrants quadrupled to $4.2 billion in 2011."

Donald Trump attends the Iowa State Fair on Aug. 15, 2015. A position paper that appeared on Trump's website a day later on the country's immigration system. (The New York Times)

After weeks of incendiary rhetoric on illegal immigration, Donald Trump unveiled his official policy plan on what is arguably the central issue of his campaign on Aug. 16.

Highlights of the plan include deporting all undocumented immigrants, ending birthright citizenship and "making Mexico pay for the wall."

"For many years, Mexico’s leaders have been taking advantage of the United States by using illegal immigration to export the crime and poverty in their own country," the position page on Trump’s website reads. "The costs for the United States have been extraordinary. ... Indeed, the annual cost of free tax credits alone paid to illegal immigrants quadrupled to $4.2 billion in 2011."

The $4.2 billion figure caught our eye. Though Trump’s campaign didn’t get back to us, we found a 2011 audit by the Treasury Inspector General for Tax Administration that corroborates his claim. Nonetheless, Trump confuses a few points.

In 2009 (not, as Trump says, in 2011), "individuals who are not authorized to work in the United States were paid $4.2 billion in refundable credits, according to the report. That’s indeed more than four times the amount in 2005 ($924 million).

How did this happen?

Although undocumented immigrants can’t get a Social Security Number, they can file taxes with a different nine-digit number, the Individual Taxpayer Identification Number or ITIN.

Experts told us that illegal immigrants make up the vast majority of ITIN filers, though there’s no way of knowing just how many. The group also includes legal immigrants (refugees, asylum seekers, spouses), foreign workers (professors, technology workers, people who own businesses in America but live abroad), and dependents of both citizens and immigrants.

Regardless of immigration status, ITIN filers are not eligible for Social Security. According to the Social Security Administration, undocumented immigrants doled out an estimated $12 billion in payroll taxes but will never get the benefits. Also, ITIN filers can’t get the Earned Income Tax Credit, due to a provision in a 1996 law.

The credit as it stands today was established in the Economic Growth and Tax Relief Reconciliation Act of 2001, one of the tax cuts passed under President George W. Bush. Unlike in 1996, Congress did not write a provision barring ITIN filers from claiming the refund. 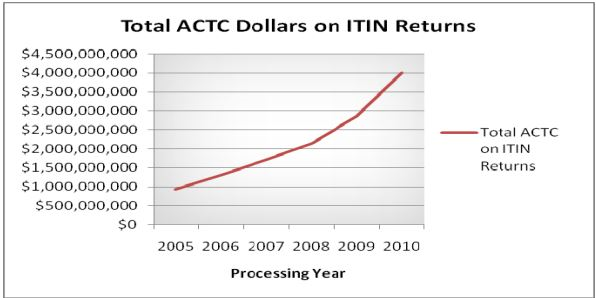 Under this current system for ITIN filers, "the government isn’t losing out," according to Bob Greenstein, president of the left-leaning Center on Budget and Policy Priorities. It gets more money in revenues than it gives out in credits.

However, Greenstein told us it’s slightly misleading to say that the recipients of the child credit are illegal immigrants.

"The vast majority of that $4.2 billion, the filer may be undocumented, but you have to have a child to receive it. And the children are overwhelmingly U.S. citizens," he said.

In other words, the $4.2 billion in tax credits largely benefits American-born children, whose parents are admittedly undocumented immigrants.

Trump’s immigration plan actually addresses this potential issue: He calls for an end to birthright citizenship.

"So his position is pretty consistent," pointed out Greenstein.

Based on an audit by the Treasury Inspector General, the claim leaves out some context. Trump conflates "illegal immigrants" with "unauthorized workers," a group composed largely of undocumented immigrants but also legal immigrants and others. The $4.2 billion refers to the amount given in tax credit refunds for children, the large majority of whom are U.S. citizens. And the actual year is 2009, not 2011 (that was the year the report was published).

Also, it's important to note that illegal immigrants pay an estimated $12 billion in payroll taxes to Social Security and don't receive benefits. So Trump is leaving out a significant part of the picture when it comes to taxes and undocumented workers.

Overall, we rate his claim Half True.

Treasury Inspector General for Tax Administration, ‘Individuals Who Are Not Authorized to Work in the United States Were Paid $4.2 Billion in Refundable Credits,’ July 7, 2011

Interview with Bob Greenstein, president of the Center on Budget and Policy Priorities, Aug. 17, 2015