On Fox News Sunday Feb. 1, host Chris Wallace asked Keane if the administration has a strategy to combat Islamic extremism.

Keane said, "We do not. Al-Qaida has grown fourfold in five years. ISIS, which began when we pulled out politically and military from Iraq, grew from an organization less than 3,000 to an organization over 30,000 in three years. Radical Islamists spread from Western Africa through the Middle East, all the way to South Asia to sub-Indian continent."

Keane first mentioned the fact that al-Qaida has quadrupled since 2010 in testimony before the Senate Armed Services committee last week. We wondered if it was accurate.

The short answer is maybe, depending on your definition. Experts cautioned that it’s nearly impossible to know how large al-Qaida is in terms of membership. And Keane’s figure is just an estimate extrapolated from an earlier analysis. It also relies on a broad definition of "al-Qaida."

So who is Keane talking about when he says "al-Qaida"?

Back in the early 2000s, and before 9/11, al-Qaida was generally understood to mean the several hundred people who swore allegiance to Osama bin Laden, said Larry Johnson, a consultant specializing in counterterrorism and a former CIA employee.

Now when people think of al-Qaida, they usually think of a much broader category consisting of that core group, plus affiliates and other Sunni Islamic extremists, such as the Islamic State of Iraq and Syria, located throughout the Middle East, North Africa and the Indian subcontinent.

Under this broad definition, Johnson said Keane’s claim that al-Qaida has grown fourfold since 2010 -- while impossible to verify -- is probably accurate.

But not everyone agrees to such a broad discussion.

Anne Stenersen, a research fellow in terrorism at the Norwegian Defense Research Establishment, said the narrowly defined al-Qaida -- that is, its core members -- has stayed relatively stable at fewer than 300 members since 2010. She prefers this definition because the affiliates have varying strategies and objectives.

For example, al-Qaida actually split from the Islamic State due to ideological differences.

Johnson also noted that some regional groups that have al-Qaida in their names -- like al-Qaida in the Islamic Maghreb or al-Qaida in the Arabian Peninsula -- were given those names by the West, so they do not necessarily reflect how close those groups are to the core al-Qaida group.

At the Senate hearing, Keane shared this map that shows various al-Qaida affiliates and other Islamic extremist groups throughout the region as of January:

Instagram posts
stated on July 31, 2022 in a post
“China threatens to shoot Nancy Pelosi’s plane down if she visits Taiwan.” 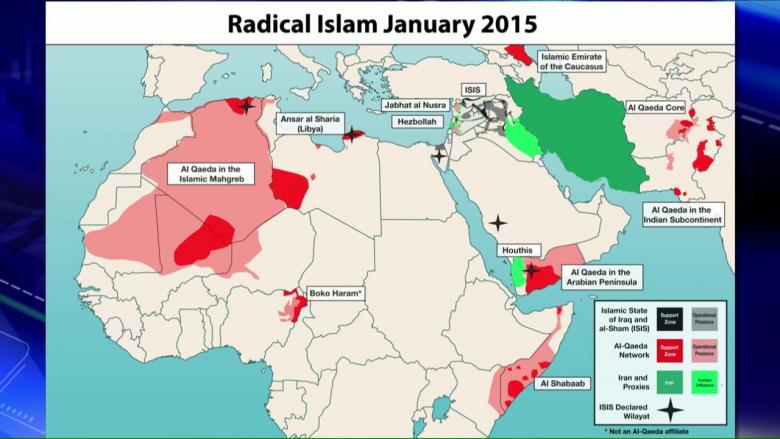 Keane told us his advisers came up with the fact that al-Qaida has increased fourfold by relying on a  2014 report from the think tank RAND. The RAND report found that between 2010 and 2013, the number of Islamic jihadist fighters doubled, and the number of attacks tripled.

Given the continued rise in activity since 2013 and based on discussions with experts, Keane and his advisers concluded that the size of al-Qaida and its affiliates has essentially doubled again since the RAND report was published. The RAND report relied on both unclassified and classified primary sources to come up with its counts.

The trouble trying to count

However, every expert we spoke with -- as well as government spokespeople -- said it’s not feasible to quantify the size of al-Qaida and its global affiliates. Other than this RAND report, there’s no official count of the number of Islamic extremists that we can use to see how the group’s manpower has grown since 2010.

"All that said, al-Qaida is almost certainly bigger than it was five years ago. It's the fourfold that I would question," said J.M. Berger, a nonresident fellow at the Brookings Institution. "For each of these groups, we can only estimate their size, and all estimates are disputed."

Kagan, of the American Enterprise Institute, said several al-Qaida groups are much larger than they were five years ago because of the 2011 Arab Spring. The revolutions left many countries without stable leadership and institutions, making them vulnerable to the rise of extreme religious groups.

This is what’s happening in Libya with the rise of al-Qaida affiliates, in Syria with the al Nusra front and Yemen with al-Qaida in the Arabian Peninsula.

Kagan added that in the past five years, al-Qaida in the Islamic Maghreb in West Africa, as well as Boko Haram in Nigeria, which doesn’t have official ties to al-Qaida, have grown tremendously.

And the United States invasion and later removal from Iraq destabilized the country, Johnson said, giving way to the rise of the Islamic State.

"Al-Qaida and its affiliates have expanded enormously over the last five years," Kagan said. "They have transformed from being terrorists to insurgent organizations and in some cases insurgent armies."

Kagan and Johnson both cited the United States’ limited response to the Arab Spring as well as its policies in dealing with Iraq and Iran as contributing to the rise in Islamic extremism throughout North Africa and the Middle East.

Bruce Hoffman, director of Georgetown University’s Center for Security Studies, said his research has shown that the number of al-Qaida affiliates has more than doubled from eight to 17 since 2008. Adding the Islamic State, once an affiliate, to that count would dramatically increase the number of fighters.

"I can’t pin an exact number to Gen. Keane’s assertion — but it doesn’t sound wildly off base to me," Hoffman said.

There’s two tricky parts to Keane’s particular claim. The first is defining al-Qaida. While the group that previously followed Osama bin Laden has remained at about the same size, there is no doubt among experts that we’ve seen a rise in the number of jihadist fighters overall. Many of those fighters were inspired by al-Qaida.

Is that right? Maybe. Maybe not. The evidence is thin, but the experts say his claim is a reasonable estimate.

Weighing everything, we rate this claim Half True.