Amy Klobuchar
stated on January 4, 2015 in comments on NBC's "Meet the Press":
"We're now the No. 1 producer of oil in the world. We've surpassed Saudi Arabia."

Considering the United States’ strength in energy production, the debate over building the Keystone XL pipeline has become a symbolic one, said Sen. Amy Klobuchar, D-Minn.

On NBC’s Meet the Press on Jan. 4, 2015, Sen. John Barrasso, R-Wyo., said the new Republican Congress’ first priority in 2015 will be to pass a bill approving construction of the oil pipeline, which would stretch from Canada to Steele City, Neb., where it would connect with an existing pipeline that goes to the coast of Texas.

Klobuchar responded by saying the project "has merit" but that the decision to build the pipeline should rest with President Barack Obama, not Congress. She said the debate has become a "symbolic" one that ignores America’s healthy energy market.

"We're now the no. 1 producer of oil in the world," she said. "We've surpassed Saudi Arabia."

According to the U.S. Energy Information Administration, which tracks global energy production and consumption statistics, the United States has produced more oil than Saudi Arabia since the fourth quarter of 2012. American oil production surpassed Russia in 2011.

Here’s a chart showing the trend from the Energy Information Administration: 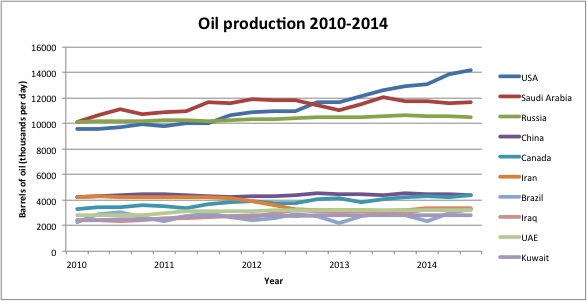 In the third quarter of 2014 -- the most recent available data -- the United States produced 14.2 million barrels of oil per day; Saudi Arabia produced 11.7 million per day; and Russia produced 10.5 million per day. Together, that’s about 40 percent of total global production.

This production growth has contributed to the United States’ ability to produce more oil than it imports for the first time in about 20 years.

The majority of the United States’ oil production growth is concentrated in four regions: Bakken, N.D., Eagle Ford, Texas, the Niobrara region in the Upper Midwest, and the Permian Basin of Texas and New Mexico.

In 2013, energy markets consultant group PIRA Energy published a report that said shale production is one of the driving forces behind the country’s production growth. Shale oil and gas are commonly associated with hydraulic fracturing, or fracking, which is the process of using water pressure to fracture a rock to release natural gas and oil. The United States is the world leader in shale gas production.

There is at least one piece of context to keep in mind when looking at the United States’ oil production compared to Saudi Arabia, noted Leonardo Maugeri, an associate at Harvard University’s Geopolitics of Energy project. Saudi Arabia has a higher capacity than the United States to produce oil, but it chooses not to use it all -- so as not to inundate the global oil market.

"In other words, if Saudi Arabia produced at full capacity -- as the U.S. does -- its production would be higher than the U.S.," Maugeri said.

Klobuchar said the United States is "now the No. 1 producer of oil in the world."

The latest global oil production statistics back up Klobuchar’s claim. The United States has been the world’s largest oil producer since late 2012. We rate her statement True.

Help fund PolitiFact's Kickstarter to live fact-check the 2015 State of the Union and GOP response.