Barack Obama
stated on January 20, 2015 in the State of the Union address:
The economy is "creating jobs at the fastest pace since 1999."

President Barack Obama gave the State of the Union address on Jan. 20, 2015.

President Barack Obama’s State of the Union address was notable for its celebratory language about the state of the economy, following a recovery that was widely considered long and slow.

Here’s one of the claims Obama made: "Tonight, after a breakthrough year for America, our economy is growing and creating jobs at the fastest pace since 1999."

We initially read this to mean that both the economy and the number of jobs had been growing at the fastest pace since 1999. That would have been a problematic claim, since the final figures for growth in gross domestic product in 2014 aren’t in yet. However, when we asked the White House press office for clarification, they responded that the president was making two separate claims -- first, that the economy is growing, and second, that the United States is creating jobs at the fastest pace since 1999.

The first of those claims is clearly true -- except for one quarter of negative growth in the first quarter of 2014, the economy has been expanding -- but we weren’t sure about the second part. So we decided to take a closer look at Obama’s claim that the economy is "creating jobs at the fastest pace since 1999."

Looking at job growth over the course of the calendar year

We looked at total nonfarm employment from December of one year to December of the next, using official figures from the Bureau of Labor Statistics. Here’s what we found:

So Obama’s on target: The job growth during calendar year 2014 was higher than any year going back to 1999.

That said, the current recovery is hardly perfect.

There have been three clear periods of job growth over the past quarter century. We looked at the gain in employment between the low point in jobs and the high point (or, for the current period, the most recent month). As this chart shows, these periods of expansion were quite consistent while they lasted. 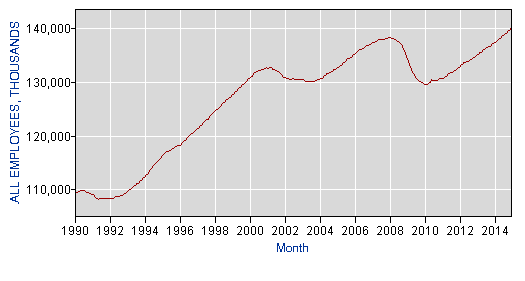 Here’s the breakdown of the three job expansions:

This shows that the current jobs recovery, while more robust and longer than the one from 2003-08, pales in comparison to the one that lasted from 1991-2001. Indeed, it pales in two different ways: The current job expansion has created 13 percent fewer jobs every month on average than the one in the 1990s, and it has so far lasted only half as long. The earlier expansion lasted for almost a full decade.

Obama said the economy is "creating jobs at the fastest pace since 1999." The current jobs recovery isn’t perfect, but Obama is correct that it’s the fastest since 1999. So we rate the claim True.