Virginia House Democratic Caucus
stated on January 19, 2015:
Assault weapons and handguns are allowed in the state Capitol while bullhorns, trumpets, helium balloons and flags on poles are banned.

House Democrats in the General Assembly have launched a petition drive to show public support for a package of pending gun control bills.

The online entreaty calls for "common sense gun laws" and, to foster the contention that Virginia’s firearm policies are awry, contains a white and blue graphic of some of the rules regarding public entrance to the state capitol.

On the left side of the graphic is the headline "Banned in the Virginia State Capitol." Underneath are pictures of a bullhorn, a trumpet, a floating helium balloon and an American flag on a pole.

The right side says, "Allowed in the Virginia State Capitol." Underneath are pictures of a handgun, a rifle, and two assault guns.

"How does this make sense?" the bottom of the chart asks in capital letters.

We wondered whether the petition accurately described the rules for entry into the Capitol. 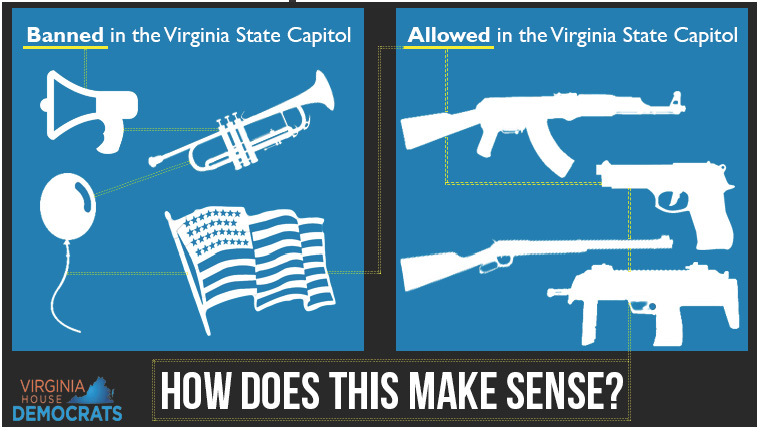 David Pourshoushtari, a spokesman for the House Democrats, pointed us to visitors’ rules posted on the General Assembly’s website. The House and the Senate have identical rules for general entry into the Capitol. The conditions vary slightly for entry into galleries in each chamber.

The basic rules for entering the Capitol are spelled out in these words on the legislative website: "Possession or use of any device that may disrupt the conduct of business is prohibited, including, but not limited to: voice-amplification equipment; bullhorns; blow horns; sirens, or other noise-producing devices as well as signs on sticks, poles or stakes, or helium-filled balloons."

That confirms two of four items Democrats said were banned. But what about trumpets?

Susan Schaar, the Senate clerk, said they would generally not be allowed since they fall into the realm of "noise-producing devices." Schaar said exceptions can be made, such as for a memorial service.

Paul Nardo, the House clerk, said flags are allowed to be brought into the building, but not if they’re hoisted on poles. The image on the Democrat’s petition shows a flag on a pole.

Nardo explained that the rules apply to everyone, including members of the legislature as well as the general public.

We couldn’t find any rules about bringing guns into the Capitol on the General Assembly’s website. But they do exist.

Capt. Randy Howard of the Virginia Division of Capitol Police said firearms access into the Capitol is governed by  rules passed in 2004 by a joint legislative committee. He told us possession is limited to three groups: General Assembly members, law enforcement officials and any holder of a valid concealed handgun permit.

Could someone bring an assault rifle into the Capitol? If he is allowed to bring in a firearm, the answer is yes, Howard said.

The 2004 rule "simply says ‘firearm’, so it’s fairly broad," Howard told us. "It doesn’t just say that the only thing they can bring in is a handgun even though that’s what’s covered by the (concealed) handgun permit."

Del. Joseph Morrissey, I-Henrico, held aloft an unloaded AK-47 in the House chamber during a 2013 debate over a gun control measure he sponsored. Morrissey said then that the weapon had been inspected by the Capitol police prior to being brought into the chamber, according to an article in the Richmond Times-Dispatch.

The Senate bans firearms in its public gallery looking over the chamber’s floor. There is no such restriction in the House gallery.

Calling for reform to Virginia’s gun laws, House Democrats noted that firearms -- including assault rifles -- are allowed to be brought in the state Capitol while helium balloons, flags on poles, trumpets and bullhorns are banned.

The list of barred articles holds up. The firearms issue is a bit trickier. They can be brought into the Capitol, but only by lawmakers, valid concealed weapons permit holders and law enforcement. They are banned in the Senate gallery.

Email from David Pourshoushtari, a spokesman for the Virgnia House Democrats, Jan. 20, 2015.

Donald Trump
stated on November 27, 2016 a tweet.:
There was "serious voter fraud" in Virginia.

Corey Stewart
stated on November 9, 2016 an interview.:
Ed Gillespie "would not mention (Donald Trump’s) name unless he was condemning him."

Kai Degner
stated on October 17, 2016 a debate.:
"The Declaration of Independence was written on paper made out of hemp."

Michelle Mosby
stated on October 11, 2016 a radio ad.:
Joe Morrissey "has been a delegate in the General Assembly for eight years with no laws passed to help our black community with education or workforce."

Joe Morrissey
stated on October 17, 2016 a debate.:
The city of Richmond "built the second richest team in the NFL a $14 million stadium."

Tim Kaine
stated on October 4, 2016 a debate.:
Donald Trump says "that NATO is obsolete and that we need to get rid of NATO..."

Tim Kaine
stated on October 4, 2016 a debate:
"Richard Nixon released tax returns when he was under audit."

Virginia First Foundation
stated on September 27, 2016 a web video.:
"The Virginia population increased by just 8 percent from 2005 to 2015, but the per capita spending in the budget increased by a whopping 38 percent."

Jack Berry
stated on September 15, 2016 a debate.:
In Richmond, Va., there’s "more moving vans coming in than going out."

Tim Kaine
stated on September 6, 2016 a speech:
"When Moammar Gadhafi was set to visit the United Nations, and no one would let him stay in New York, Trump allowed Gadhafi to set up an elaborate tent at his Westchester County (New York) estate."

Donald Trump
stated on September 6, 2016 a rally.:
Barack Obama has "doubled our national debt. Doubled it. It's going to be close to $20 trillion when he leaves."

Gary Johnson
stated on August 29, 2016 an interview.:
"Undocumented workers crossing the border right now is at a 12-year low."

Tim Kaine
stated on August 13, 2016:
On drilling off the Atlantic coast