Donald Trump
stated on October 28, 2015 in comments during the CNBC debate.:
Says Ohio Gov. John Kasich "got lucky with a thing called fracking," which "is why Ohio is doing well."

In the third Republican debate, Donald Trump and Ohio Gov. John Kasich got into a fracas over fracking.

"Folks, we’ve got to wake up. We cannot elect somebody who doesn’t know how to do the job," Kasich said on Oct. 28.

Trump fired back that Kasich’s record in Ohio wasn’t so good.

"First of all, John got lucky with a thing called fracking, okay?" Trump retorted. "He hit oil. He got lucky with fracking. Believe me, that is why Ohio is doing well."

"Ohio does have an energy industry, but we’re diversified," Kasich said in response.

Who was right? We reached out to the Trump camp but didn’t hear back. The data suggests and experts told us, however, that Trump is grossly exaggerating fracking’s role in Ohio’s economy.

To refresh, fracking or hydraulic fracturing is the process of blasting pressurized water, sand and chemicals to extract natural gas from shale rock miles underground. Ohio, the birthplace of Standard Oil and the leading producer of crude oil a century ago, sits on parts of two major shale formations.

Drilling began in the Utica and Marcellus shales in eastern Ohio in 2010, when the state was facing a projected budget shortfall and when Kasich was elected to office. Ohio is now running a $2 billion surplus.

Statistics show that fracking contributed to both jobs and tax revenues in Ohio, but the numbers aren’t overwhelming.

Kasich’s spokesperson Rob Nichols pointed to data showing that fracking was responsible for just 2.6 percent of the 278,150 total jobs created in the state during that time period.

As for revenue, we looked at Ohio Department of Taxation’s annual reports and found that the severance tax imposed on the oil and gas industry contributed to less than 1 percent of tax revenue in Ohio from 2010 to 2014.

Policy Matters Ohio, a Cleveland-based liberal think tank, estimates a slightly lower impact. According to their analysis of BLS data, shale jobs represented about 0.26 percent of total employment in Ohio in the first quarter of 2015, and about 2 percent of total jobs added between 2010 and 2015. By comparison, the auto industry added about three and a half times more jobs.

"I’ll admit that I tweeted in outrage at (Trump’s) statement since both parts of it are inaccurate and not borne out by the data," said Amy Hanauer, the think tank’s executive director, who also contends that Ohio is actually not doing well.

At the beginning of the fracking boom, the oil and gas industry hailed it as "the biggest thing economically to hit Ohio since maybe the plow," in the words of one executive. Shale development, according to industry officials, would bring an estimated $500 billion and 200,000 jobs to the state.

But fracking wasn’t as profitable in Ohio as expected, thanks to a slump in the oil prices coupled with low production.

"I would say the growth has been slower than we originally anticipated," an oil refinery official acknowledged in 2012, according to Reuters.

"Nothing like those numbers had been seen," said Hanauer. "Employment even in the drilling counties was, at that time, below pre-recession levels.  Sales tax revenue was up significantly, a good thing, but many of those who have found jobs were from out of state."

A 2012 economic analysis sponsored by pro-industry entities — the Ohio Chamber of Commerce and the Ohio Shale Coalition — estimated that shale development would, by 2014, result in an additional 65,000 jobs and just a 1 percent improvement to the state GDP.

The 1 percent estimate was "pretty much on target," according to report co-author Douglas Southgate, a professor emeritus of environmental economics and public policy at Ohio State University who says he’s pro-fracking.

The overall employment impact, meanwhile, "has been small enough that not even OOGA — the Ohio Oil and Gas Association — has been talking about it," Southgate told us.

Even if oil prices pick up again and fracking’s impact grows, its role in Ohio’s economy wouldn’t be as large as Trump is trumpeting it to be.

"Ohio has a far more diverse economy than, say, North Dakota or Oklahoma," said Andrew Thomas of Cleveland State University’s Energy Policy Center, the principal investigator of the 2012 report. "I am skeptical that all growth in the state can be attributed to the oil and gas industry alone."

Kasich’s campaign forwarded us a report from JobsOhio, the state’s privatized economic development agency, to that point: 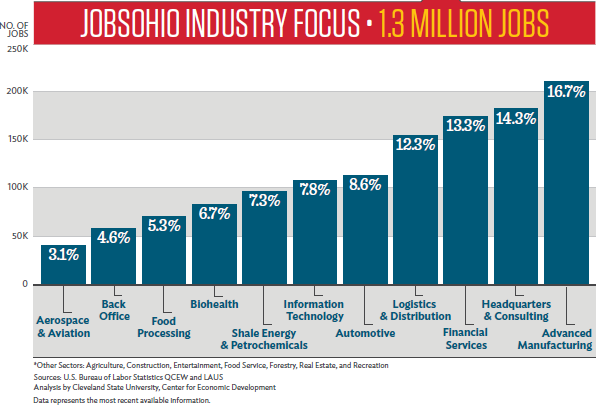 For the record, not even the drillers themselves back Trump’s claim. Here’s a statement Shawn Bennett, the executive vice president of the Ohio Oil and Gas Association, provided to PolitiFact:

"While we appreciate Mr. Trump acknowledging the significant and positive economic impacts that oil and gas development has had on Ohio, we can not take credit for all of the economic growth that has taken place during Gov. Kasich's tenure."

Trump said, "John (Kasich) got lucky with a thing called fracking," which "is why Ohio is doing well".

Though Ohio underwent a fracking boom in recent years, Trump is overstating its impact on Ohio’s economy. By all estimates, fracking jobs account for 2 percent of those added in the state during Kasich’s tenure. Shale development has improved GDP by about 1 percent and contributed to less than a percent of the state’s tax revenue.

Not even the drillers themselves back Trump’s claim. We rate it False.

Cleveland State University, "An Analysis of the Economic Potential for Shale  Formations in Ohio," 2012

Columbus Dispatch, "Fracking: So where’s the economic boom that was promised?" Jan. 28, 2014