Jeremy Bird
stated on October 2, 2015 in a tweet after the shootings at an Oregon community college:
"90% of Americans want national background checks that close loopholes."

An adviser to a group focused on turning Texas Democratic-blue suggested after the fatal shootings in Oregon that there’s a huge consensus nationally in favor of mandating a background check before any gun purchase.

He posted that comment the day after a man opened fire at Umpqua Community College in Roseburg, Ore., killing nine. According to news accounts, authorities subsequently collected 14 guns owned by the man, who killed himself at the scene.

Hours before Bird tweeted, ATF Assistant Special Agent in Charge Celinez Nunez said at a news conference that all of the weapons were purchased legally, seven of them by the shooter or his family members in the last three years.

And was Bird right about sweeping support for universal background checks?

Bird’s claim rang a bell. In April 2013, we found True a claim by Lee Leffingwell, then Austin’s mayor, that 90 percent of Americans and 74 percent of National Rifle Association members supported background checks of gun purchasers. Polls taken in 2012 and 2013 supported both figures, though one taken closest to Leffingwell’s comment indicated support among all Americans possibly slipping a bit below 90 percent.

Currently, background checks are required in sales by federally licensed gun dealers but not for gun sales by private sellers. But President Barack Obama and others have called for requiring criminal background checks for all gun sales. In 2013, the National Rifle Association suggested that an expansion would fail to rope in criminals.

A January 2013 Pew Research Center poll found 85 percent of all respondents in favor of making private gun sales and sales at gun shows subject to background checks, with comparable support from Republicans, Democrats and independents, Pew said. The margin of error for the entire sample was 2.9 percentage points.

By email to our inquiry about Bird’s statement, Pew spokesman Brian Mahl pointed out a center survey of 2,002 adults taken from July 14-20, 2015, that found (again) 85 percent of respondents in favor of making private gun sales and sales at gun shows subject to background checks.

Our own web search turned up a survey of 1,326 adults, intended to be a representative national sample, taken Jan. 2-16, 2015 by researchers at the Johns Hopkins Bloomberg School of Public Health. Some 84 percent of respondents favored requiring background checks for all gun sales, compared to 89 percent in a similar survey taken two years before, a "slight erosion," the authors wrote.

We noted before a January 2013 CBS/New York Times poll indicating 92 percent of all the respondents at that time favoring background checks for all potential gun buyers. The poll had an overall margin of error of three percentage points. A more recent CBS News poll, taken of 1,047 registered voters July 29-Aug. 2, 2015,  showed 88 percent of respondents favoring background checks for all gun purchases including, CBS News said, "large majorities of Republicans (81 percent), Democrats (93 percent), and independents (89 percent)."

By email, Battleground Texas replied to our inquiry by pointing out a news story in The Hill, a Washington, D.C., newspaper, stating that a June 2014 Quinnipiac University poll found 92 percent of surveyed voters in favor of universal background checks for gun purchases. The survey reached 1,446 registered voters from June 24-30, 2014 and had a margin of error of plus or minus 2.6 percentage points. 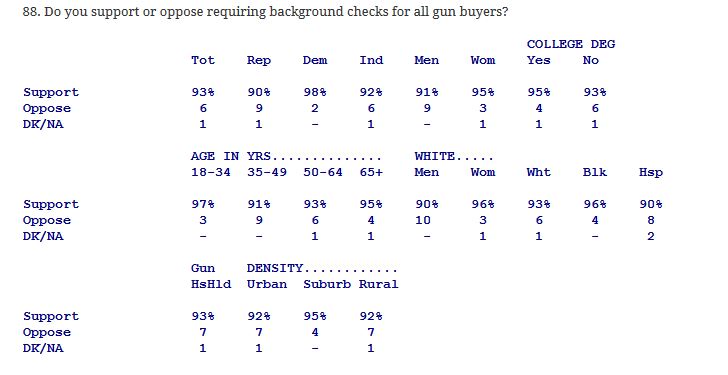 And in Texas? A February 2013 University of Texas/Texas Tribune poll of 1,200 Texas voters found 78 percent of respondents somewhat or strongly supporting criminal and mental health background checks for all U.S. gun purchases, including at gun shows and for private sales. Those results had a margin of error of plus or minus 3.3 percentage points. A June 2013 follow-up survey found 74 percent of the 1,200 respondents somewhat or strongly supporting such background checks.

Polls continue to show a strong tilt in favor of background checks prior to all gun purchases; the latest available poll before Bird spoke found 93 percent of adults in favor. Then again, the popularity of this idea may bear watching. Other 2015 polls found as few as 84 percent of respondents backing the universal checks.