NowThis
stated on August 10, 2016 in a viral video:
Says President Bill Clinton did not sign NAFTA.

Republican presidential candidate Donald Trump has repeatedly criticized the North American Free Trade Agreement and pointed out that it was signed by President Bill Clinton, husband of his Democratic opponent, Hillary Clinton.

NowThis, which spreads stories on social media, has accused Trump of getting it wrong — repeatedly.

On Aug. 10, 2016, NowThis posted a video on Facebook headlined "Fact Check: Everything Donald J. Trump says about NAFTA is wrong," and on YouTube titled "Donald Trump Can't Get The Facts Right About NAFTA.". 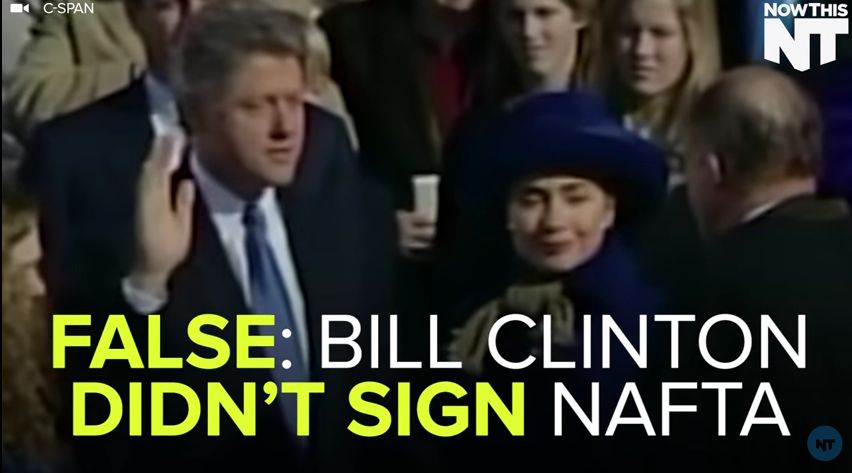 Others, such as the liberal site Anti-Republican Crusaders, shared the video as well. As of Thursday afternoon it had been viewed over 1.1 million times.

We wondered how we could have repeatedly missed Trump being so wrong so often when it comes to the treaty.

It turns out that Trump isn't wrong.

Clinton signed the deal on Dec. 8, 1993. His speech that day is available in print form and on YouTube.

However, it should be noted that Clinton isn't the only one responsible for the deal.

Glenn Youngkin
stated on October 31, 2022 in a campaign rally,
In his election as governor, “We won cities that no Republican had ever won.”

It was inaugurated by his Republican predecessor, George H.W. Bush, who signed the initial version of the treaty in December 1992, before it was submitted to Congress for ratification and after he had lost to Clinton.

But Clinton had campaigned for changes to the deal and sought side agreements requiring Mexico to enforce labor standards, improve working conditions and create better environmental safeguards. Negotiations were begun and those side deals were signed by Clinton in August 1993.

After a tough political battle in which Clinton campaigned hard for the pact, the agreement was ratified by the House 234-200 and the Senate by 61-38. Republicans provided the margin of victory in both chambers, leading to Clinton's signature on the final version.

When we contacted NowThis, editor Sarah Frank focused on the original signing by Bush. acknowledging that "Clinton signed the legislation into law after it was passed by Congress."

"Trump is saying 'Clinton signed NAFTA' as though it was his deal. It was Bush's deal," Frank said in a followup email.

It's true that the George H.W. Bush administration first negotiated the deal and that Trump is ignoring that element. But Clinton got it modified, pushed hard for the final version, and signed it with enthusiasm once Congress ratified it.

The statement is not accurate, and we rate it False.