Lamar Smith
stated on July 19, 2016 in remarks to the Texas delegation to the Republican National Convention:
"One third of all federal prisoners today are illegal immigrants."

A San Antonio congressman, already on record in support of Donald Trump for president, told Texas delegates to the Republican National Convention that Trump’s on target characterizing some immigrants as criminals.

U.S. Rep. Lamar Smith said at the Texas delegation’s July 17, 2016, breakfast in Cleveland that Trump "knew what he was talking about. One-third of all federal prisoners today are illegal immigrants. They have committed some of the most worst crimes; they have committed the rapes and the murders and everything else."

We wondered if indeed one-third of federal prisoners were in the country without legal authorization. Not so, we ultimately found. Smith was citing a slightly outdated figure of individuals sentenced to the federal pen in a given year, not the total federal prison population.

Right off, we suspected Smith was off base. Our June 2016 fact check of a different claim took note that as of April 2016, nearly 80 percent of the federal system’s approximately 195,000 inmates were U.S. citizens; 15 percent were citizens of Mexico, according to the Federal Bureau of Prisons.

A bureau breakout up to date as of late July 2016 showed the citizenship percentages to be about the same; so, you’d expect inmates living in the country without legal authority to comprise an even smaller share of the prisons’ population.

Yet Smith spoke before that breakout was posted. When we asked his House spokeswoman, Jennifer Pett, the basis of his claim, she said by email that he was referring to "illegal alien"  immigration statuses shown for nearly 37 percent of individuals sentenced to federal prison in the fiscal year running through September 2014, as shown in a chart from the U.S. Sentencing Commission.

This turned out to be the latest-available breakdown we could find of incoming prisoners by immigration status. According to the chart, 58 percent (43,479) of the 74,911 individuals that year were U.S. citizens. Otherwise, the chart notes 27,505 "illegal" residents sent to prison plus 3,017 foreigners living here with legal permission, 206 people under extradition and 704 individuals with unknown statuses.

Of the "illegal" residents, 20,333 — 74 percent of them — were primarily sentenced for immigration violations, not violent crimes, according to the chart. Nine unauthorized immigrants were primarily convicted of murder, 50 of assault, 19 of sexual abuse, the chart shows.

Next, we inquired into the share of federal inmates, as Smith put it, who are currently held after living in the country absent legal permission.

On behalf of the sentencing commission, which gathers information on federal crime and sentencing issues, spokeswoman Christine Leonard confirmed the validity of Smith’s fiscal 2014 chart. Leonard said the agency hasn’t posted a similar analysis for the fiscal year running through September 2015. But in fiscal 2015, she pointed out, 29,166 noncitizens--not necessarily living in the U.S. without legal permission--accounted for 42 percent of the 70,255 people sentenced to federal prison.

We also asked the Bureau of Prisons for the percentage of undocumented immigrants among the entire federal prison population — the group that Smith singled out in his statement. No such data are available, spokesman Justin Long advised us by email. But the bureau does tally  the proportion of inmates by citizenship status--and noncitizens have recently accounted for 22 percent of all inmates.

Still, could it be there’s been fluctuation with the share of immigrant-inmates spiking some months?

Doesn’t look like it. Since January 2016, Long replied, the greatest monthly share of noncitizens among inmates was 21.9 percent, the least 21.6 percent.

Next, we asked outside experts why it’d be that noncitizens make up 22 percent of inmates of late despite the fact that "illegal aliens" accounted for nearly 40 percent of the people sentenced to federal prison in fiscal 2014.

Their consensus: The standing population of inmates reflects a good number of prisoners serving longer sentences while most noncitizens sent to prison were convicted of immigration crimes, which mostly entail shorter sentences.

Jessica Vaughan of the Center for Immigration Studies, a think tank that focuses on lessening immigration, summed up by email: "With immigration offenders, there is high volume but shorter sentences, so faster turnover, which translates to a smaller percentage of the average daily population" in prison.

Meantime, Julie Samuels of the Urban Institute pointed out an institute chart showing that people convicted of immigration violations in fiscal 2014 accounted for a greater share of people sent to prison than they did of the total prison population: 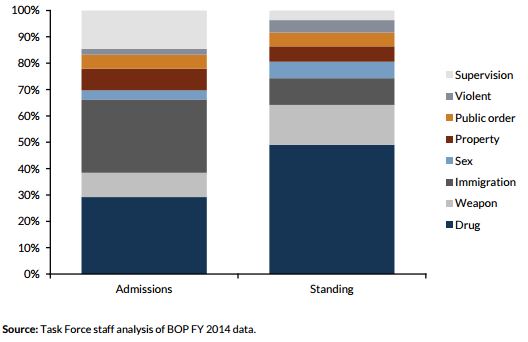 Another authority, Nazgol Ghandnoosh of the Sentencing Project, which says it focuses on reforms in sentencing policy, pointed out that as of the end of December 2014, some 69,000 of the 1.6 million state plus federal prisoners were noncitizens, per a September 2015 report by the federal Bureau of Justice Statistics, though we noticed that report lacked counts for several states including California.

Smith told his fellow Texans: "One third of all federal prisoners today are illegal immigrants."

Not so. Rather, this figure ties to the 37 percent share of individuals sentenced to prison in fiscal 2014 who weren’t legally living in the country--and there doesn't appear to be a more recent breakdown.

More to the point, the government doesn’t sort all inmates by immigration status, which leaves us with its guidance that as of mid-2016, 22 percent of inmates weren’t U.S. citizens. It seems logical to conclude that unauthorized residents comprised a smaller share of all the prisoners.