Republican Party of Florida
stated on August 19, 2016 in a Facebook post:
Says Hillary Clinton "voted to raise taxes on workers earning as little as $41,500."

Hillary Clinton has made it clear on multiple occasions she doesn’t want to raise taxes on the middle class, but the Republican Party of Florida said she once voted to do just that.

The party posted an image on its Facebook page that says Clinton "voted to raise taxes on workers earning as little as $41,500." 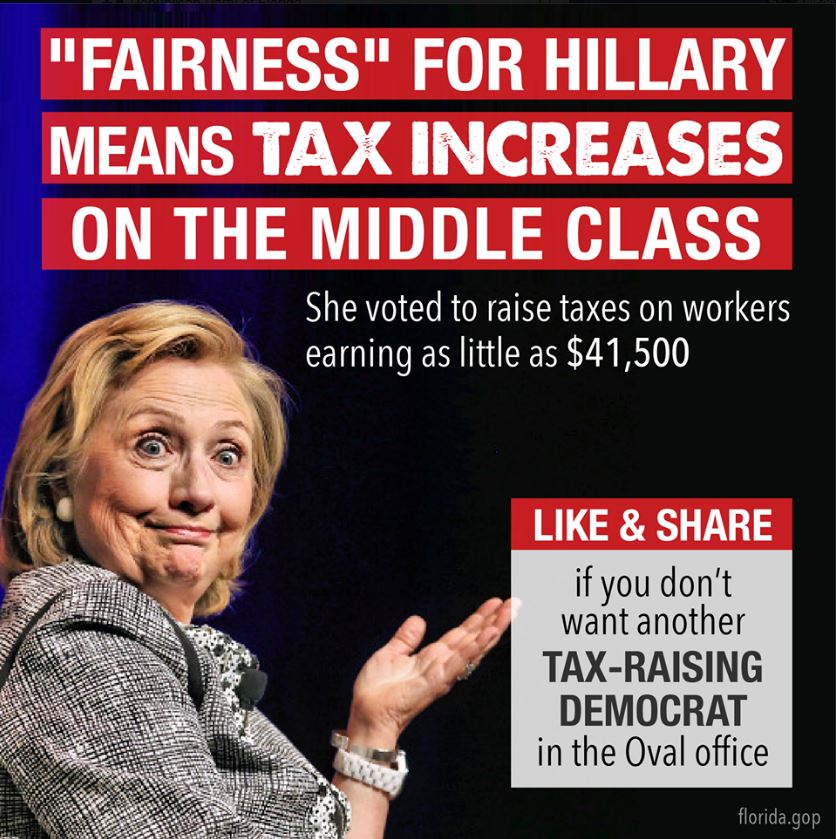 Is Clinton guilty of double speak? What we found is the truth was far more nuanced than the what the image claims.

The GOP cites a March 14, 2008, vote, when Clinton joined Democrats and one Republican, Sen. Olympia Snow of Maine, in voting for Senate Continuing Resolution 70. The measure passed 51-44.

Continuing Resolution 70 set the framework for the 2008-09 federal budget. It crafted a $3 trillion roadmap for lawmakers to follow in building the next year’s federal budget. It also created revenue markers for future years, so lawmakers could begin to contemplate how the budget picture may look down the road.

If this reads like a mushy description, it is.

As the New York Times put it at the time, the resolution -- and the companion passed in the House "are nonbinding and represent no formal action on either spending or taxes."

Literally speaking, Clinton’s vote did nothing. ("Congress engages in $3 trillion political act," read the headline in the International Herald Tribune.)

So how do Republicans claim CR 70 is evidence she voted to raise taxes on the middle class?

Among the measures contained in CR 70 were revenue projections that assumed a number of temporary tax cuts signed by President George W. Bush in 2001 and 2003 would expire at the end of 2010.

The resolution endorsed extending $340 billion worth of the tax cuts, the Associated Press reported at the time, but "balked at continuing all of them."

Viral image
stated on August 28, 2021 in a Facebook post
Says the Tampa Bay Buccaneers owner paid for a Wall Street Journal ad critical of the president.

Among the projected revenue changes that Clinton voted for, one would have raised the 25 percent tax bracket back to its pre-2001 level of 28 percent.

There are several problems with this claim, however.

Clinton’s vote was nonbinding. As we already mentioned, the vote didn’t affect people’s pocketbooks. CR 70 had no binding impact on the tax policy in the United States in 2008, 2009 or any year after that.

In fact, it was a key point during the 2008 presidential election.

"I am absolutely committed to not raising a single tax on middle- class Americans, people making less than $250,000 a year," Clinton said at an ABC News debate in April 2008, a month after her vote on CR 70.

"In fact, I have a very specific plan of $100 billion in tax cuts that would go to help people afford health care, security retirement plans, you know, make it possible for people to get long-term care insurance and care for their parents and grandparents who they are trying to support, making college affordable and so much else."

William Gale, an economist at the Tax Policy Center and Brookings Institution, said allowing a temporary tax provision to expire is different from voting for a tax increase. "In both cases, taxes would go up, but if the claim is that she VOTED for it, that seems not right to me," Gale wrote in an email.

The Republican Party of Florida said on Facebook the Hillary Clinton "voted to raise taxes on workers earning as little as $41,500."

Clinton voted for a nonbinding Senate resolution in 2008 that envisioned a world where many of the Bush-era tax cuts would have been allowed to sunset, as intended, at the end of 2010. In that world, tax rates would have gone up for someone making about $41,500 a year.

But Clinton also said that had she been elected president, she would not have supported such a change and promised not to raise taxes on anyone making less than $250,000 a year.

Neither action ultimately mattered -- Clinton’s vote didn’t carry the force of law and she lost the Democratic nomination to Barack Obama.

The Republican Party of Florida’s statement contains an element of truth but ignores critical facts that would give a different impression. We rate it Mostly False.

Congress.gov, "S.Con.Res.70 - An original concurrent resolution setting forth the congressional budget for the United States Government for fiscal year 2009 and including the appropriate budgetary levels for fiscal years 2008 and 2010 through 2013."